Polar bears are the world's largest terrestrial predator, with an average adult male weighing in at 450 kg (~1,000 lb) of claws and teeth.  And, unlike other bear species, Ursus maritimus considers people to be an acceptable alternative to their usual diet of seal. (The picture of the bear below was not taken by me, but was taken from Google Images) 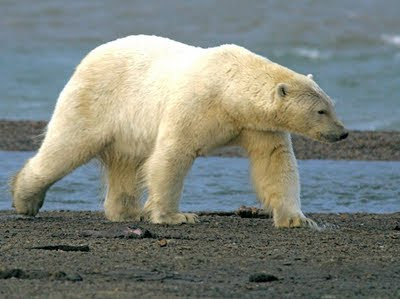 Churchill, Manitoba, is home to the world's largest breeding population of polar bears and their close proximity to people leads to many potentially dangerous encounters.  Consequently local residents, and visitors who wish to remain un-mauled, adapt to the omnipresent threat. 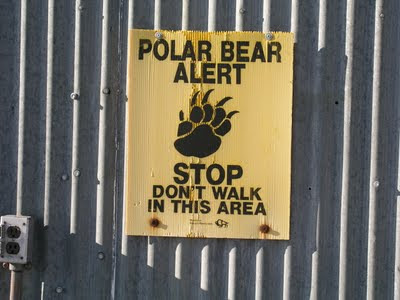 The protocol at the Churchill Northern Studies Centre, the research facility where I stayed was to ensure that doors were kept closed at all times, and to look outside first before opening any doors to leave - since polar bears typically ambush seals at their breathing holes in the ice, they've also learned that doorways are good places to lurk in search of an easy meal.  And whenever you are outside, particularly when outside of town, it is important to grow eyes in the back of your head and be on the constant lookout for potentially dangerous situations.  This is especially true when working on the coastline, where the rocky shore and boulder fields often make it difficult to see an approaching bear until it is too late. 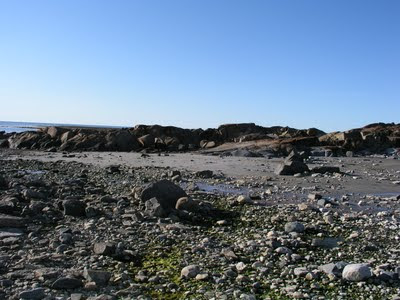 Working in conditions like this forces you to be constantly aware of your surroundings and always assessing potentially dangerous situations.  At one time this is how all people lived, but civilization has more or less culled our survival instincts, lulling us into a false sense of security despite the fact that the two-legged urban predators are the biggest threat that most of us face on a daily basis.  Over the past sixteen years I've had several close encounters with bears in the field and they've all ended well; by contrast I've had several violent confrontations with thugs in the city in just the past few years.

Another interesting facet of life in Churchill is that you never leave town unarmed.  Twelve-gauge shot-guns are as ubiquitous an accessory there as cell-phones are in the city, and it was amusing to see a person bicycling down the street with a shot-gun slung across his back.  This is a perfectly ordinary sight, which in the big city would illicit panic and end with the cyclist face-down on the ground, hand-cuffed and surrounded by police with weapons drawn.

These observations have gotten me thinking, as always, about gaming, particularly about the prevalence of personal weapons in a fantasy city.  I've rarely ever seen any sort of weapons restrictions in a fantasy campaign, yet it seems to me that such restrictions would increase in direct proportion to the size of the city and consequent power of civil authority.  Small towns along the frontier are likely to be completely unrestricted, whereas urban settings might require permits, peace-bonds, or even an outright ban on carrying personal weapons.  I suspect that such a ban would be particularly common in cities with tyrannical or extremely authoritarian rulers, where civil disobedience and revolt are likely.

Such complications add an interesting dynamic to urban adventures since the players will still need to deal with  the ubiquitous urban predators while either placing themselves at a disadvantage against such foes or dealing with the legal repercussions of not doing so.

It was just such authoritarian regulation that led to the widespread proliferation of karate and kobudo throughout Okinawa, whose citizens were forbidden the use of weapons, but who still had to deal with constant threats to their lives and property.  So, in this case, the prohibition of weapons had a profound influence on Okinawan culture and it stands to reason that similar analogues might exist in a fantasy setting.

This post is the last of my recollections of Churchill and is also an introduction to my next couple of posts on unarmed combat in fantasy gaming.  So as the sun sets on Churchill, I give you the polar bear, Swords & Wizardry style.

Polar bears are the largest of all bear species and have particularly robust skeletons and thick fur, which protects them from harm.  They are very fast, both on land and in the sea, and they are well-insulated and able to withstand extreme cold.

Great post! Polar bears are bad ass, and the thought of them drowning or of going extinct due to global warming really bums me out.

Yep, polar bears are magnificent. Unfortunately, one had to be put down in Churchill shortly before I got there. A severely underweight male came into town, nearly got a tourist, and destroyed a Wildlife Conservation Officer's truck when he tried to scare it off with bangers.

These sorts of encounters are going to become more common as global warming melts the ice floes, destroying their hunting grounds and forcing them into town for food. Some experts are giving the Churchill population only 50 more years.

Wow, I'm glad I found this blog. You have some really fascinating stuff in here!

Thanks very much, Uri, I'm glad you're enjoying it!