When I first heard the announcement of Reaper's new Dark Heaven Bones line of polymer plastic miniatures I was cautiously optimistic, though a little dubious about the claims - specifically that the quality was as good as metal and that they could be painted without primer.

Consequently, I limited my initial order to just three miniatures: Purple Worm, Ghost, and Ogre Chieftain, so that I wouldn't lose too much money if they turned out to be crap.  My order arrived the other day and I spent much of the weekend testing them out and painting them up

After giving them a good look over I was pleasantly surprised; the quality is, as advertised just as good as metal. In fact, once they are painted I doubt you would notice a difference.

The first thing I did was to test the no primer claim.  I base-coated my purple worm and gave it the gears: I rubbed the heck out of this thing, subjecting it to the sort of abuse that no miniature is ever likely to experience unless your dog starts chewing on it.  In the end I was only able to rub paint off the points of some extremities, which is no worse than you'd expect from a primed miniature.

Furthermore, these things are incredibly tough and resilient. The polymer is soft enough to absorb an impact, so you can drop these things, knock them around, step on them and you will likely not even mar your paint job let alone break them.  These miniatures are meant to be played with, unlike resin, which is incredibly fragile and easily broken.

The downside to this durability is that the mould lines, while small, are extremely difficult to get rid of.  Scraping them with the edge of a hobby knife does nothing, and light filing is ineffective.  To file off the mould lines you need to really put some elbow grease into it.  This is fine when they occur on flat open surfaces, but when they cross detailed areas they become a serious pain in the ass.

Another minor downside is that the bases are somewhat warped and the miniatures do not stand stably on them; even the wide-based purple worm was wobbly.  So they do need to be based.  This is not an issue for me because I always base my miniatures, regardless, as even metal miniatures usually need a wider base to stabilize them.

The miniatures took the paint well, even without priming, although I found some of the details hard to see in the naked white plastic.  I tried applying a black wash prior to painting, to make the details stand out, but the wash tended to bead on the surface.  I created a wash of thinned down Reaper brush-on black primer and this worked very well, making the details pop.  Of course you can always just prime the miniatures as normal if you wish, and I will probably do so in the future because old habits die hard, and I'm too set in my ways to change them.  I just wanted to paint these first miniatures, unprimed, to put Reaper's claims to the test.

So, behold my finished products: 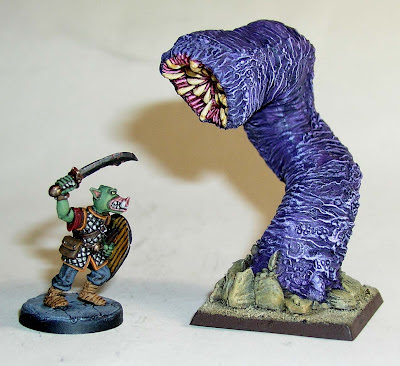 Here is the purple worm, with a snack-sized Otherworld Orc for scale.  The metal version of the purple worm costs $27.49.  The plastic version: $2.99 and there is no fear of a heavy metal monstrosity toppling over and crushing miniatures beneath it. 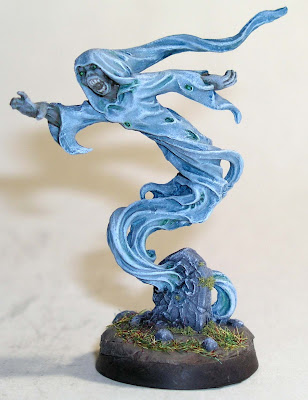 This ghost is a mere $1.99.  For twenty bucks you can overwhelm your players, and their little hirelings, too! 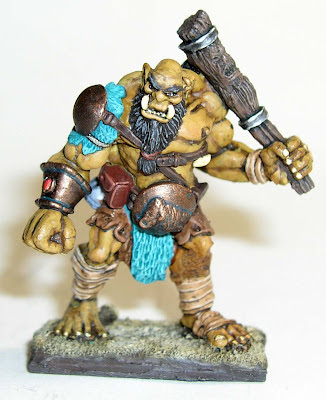 Finally, this big-ass Ogre Chieftain was only $2.49.  Now that I see the photograph, I'm not sure I like the blue furs.  I wanted a cool colour to contrast with the dominant earth tones, but I'm not sure it works as well as I'd hoped.  The camera is the harshest critic.

So, that's the skinny on Bones.  They are cheap, durable, and of comparable quality to metal.  I still prefer metal miniatures; there's something about the heft of metal that I really enjoy, but the good news is that, unlike Games Workshop, Reaper is not replacing its metal miniatures with plastic.  They have no plans to stop producing their metal lines, but the possibilities offered by the Bones line is very attractive.  Imagine fielding an entire army for less than $100 dollars.  Needless to say, I plan to buy more of these.

Reaper has kind of gone down a different path from GW, whose resin miniatures are badly cast, pitted and often warped and who charge more than 20 times the price of a Bones miniature.  Bones, on the other hand, lack the crisp detail of resin, but are vastly more durable and the price speaks for itself.  For example, if GW had produced the ghost miniature in resin it would cost $20, not $2, and the purple worm would sell for about  $60 or $70.
Posted by Sean Robson at 9:15 AM

Very nice. I think those turned out quite well, blue fur and all.

Thanks, Trey. I think I'll try re-painting the furs red, though; or a dark brown the same colour as his beard. The blue just isn't working

These look great. Like you, I prefer the heft of the metal miniatures. But I do go in for plastics when cost is an issue, so it's nice to know there's another option out there.

Love reading your painting posts. I always learn something new :)

They look great but I love metal minis too much to change over, regardless of price.

I just got a reaper gift certificate too...

Thanks for the thorough review. It sounds like Bones will be great for certain gamers.

Just wanted to make sure everyone knows that Reaper is running a Kickstarter to get more SKUs in the Bones line. You can get almost 200 miniatures for $100 now, and they have their largest dragons for $10-$15.