One of my favourite movies from the 1980's is Heavy Metal.  I was 15 years old when it came out - just the right age to really appreciate animated nudity, and at the height of my D&D years, it proved to be a big influence on my gaming as well.  I once created a campaign whose main villain was a priest of Set who carried a scepter with a glowing green orb that had the power to corrupt the souls of others: a not-too-subtle reference to the Loc-nar from Heavy Metal.  I also often had the soundtrack from the movie playing while I planned adventures; in fact, I bought the Heavy Metal soundtrack on CD about a year ago and now often play it when I'm painting miniatures. 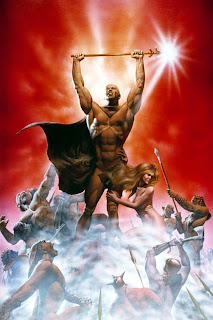 This evening I decided to spend the rainy night on the couch with a bowl of popcorn and watch Heavy Metal and was struck by a revelation that was probably obvious to everyone else who has ever seen the movie.

In the sequence entitled 'Den' by Richard Corben, shortly after Den arrives in Neverwhere he witnesses a priestess about to sacrifice a naked woman in a ritual to summon the god that sounds phonetically like Oo-la-tec.  For some reason, it never occurred to me before, that this sounds an awful lot like Cthulhu backwards.  A quick consultation with Wikipedia confirmed that Oo-la-tec is actually spelled 'Uhluhtc.'

I've never read much of Corben's Neverwhere comics and have only just discovered that they are heavily inspired by Howard's Hyborian Age, Burroughs's Barsoom, and Lovecraft's mythos.  Now that I know, I'm going to have to try and track down the Neverwhere collections.

My wife has sometimes called me "the most unobservant person in the world" and if a Cthulhu-phile who has watched Heavy Metal as many times over nearly thirty years as I have can have missed the obvious reference to Cthulhu for so long, she may be right.
Posted by Sean Robson at 9:47 PM

I love Corben's art. I read Heavy Metal only sporadically since I was more into Epic Illustrated at the time, so I only ever got to read occasional chapters of 'Den.'

Sadly a used copy of the first 'Neverwhere' collection runs between $80-$100 on Amazon, so I'm going to have to decide how badly I want this or try to find a cheaper copy somewhere.