Although Winnipeg is still held fast in winter's icy grip, with temperatures in the -30's, it is inevitable that spring will arrive eventually.  Usually spring's arrival is eagerly anticipated, but this year it heralds the likelihood of severe flooding.  The Red and Assiniboine Rivers intersect in Winnipeg, both have severe flood forecasts, and I live a half block from the Red River.  I'm not too concerned about water levels reaching my house, but a sewer back-up is possible, so I thought I'd get a head-start on damage mitigation and move stuff off my basement floor.  By which, of course, I mean I've been sitting in the basement reading old comic books and digging through boxes that haven't been opened in fifteen years.

Today I unearthed a cache of Grenadier miniatures, including this box of Traveller Imperial Marines that I bought sometime in 1983 and completely forgot about. 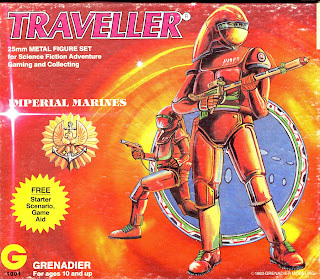 This is even better than finding money in the pocket of an old coat!

Now that I have this box of power armoured marines, I'm not sure quite what to do with them.  I was originally using them as Viper Agents in my Champions campaign, which I'll never need them for again; and, as you can see by the truly atrocious paint job, they need to be repainted.  But as what? 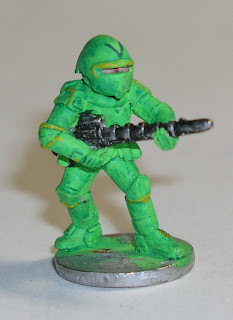 There's also a nifty rocket launcher that I can always use, if for nothing else, as a Warhammer 40K objective marker: 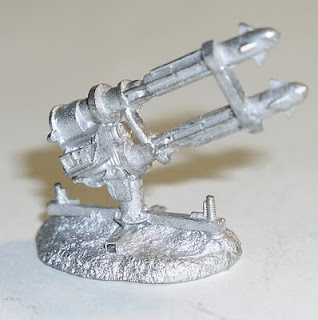 Well, how to paint them will be a question that I will undoubtedly ponder in the days ahead as I sit in my basement procrastinating flood mitigation and root through even more old boxes.
Posted by Sean Robson at 6:08 PM

Wow nice surprise Sean. Did you get happy when you saw them? I know I get happy if I find there is one more M&M in the bag that I thought was empty. Yours is better than that!

Yes, Tim, finding miniatures always makes me happy! I've got more painting projects than I can stay on top of, but I can always use a few more.

Overlooked M&M's are good too.

"This is even better than finding money in the pocket of an old coat!" Oh man, seriously. What an awesome recovery. I really like these figures - quintessential classic Traveller.

I have that box of minis! Hmm.. somewhere in the basement.. my mom's basement? I never did paint mine either. I think my favourite was the guy with a hole blasted in his chest. I remember at the time I got it, the only Traveller set I had was the Starter box, so I looked at the included adventure and couldn't quite figure it out :)

Hey Michael, you might have to do a little basement spelunking yourself!

De-lurking long enough to say ... I am in Winnipeg too. Thanks for the enjoyable Blog, I've been reading since you started the "Art of Dungeoneering".

Here's to a long slow melt in the spring!

Hi Richard, thanks for the feedback. Now that you've de-lurked, don't be a stranger.

I'll drink to a long slow melt! And not throwing my back out on sand-bagging duty.