In October of 1981 I was taking driver training during lunch hours at my high school, in eager anticipation of receiving my 'learner's licence,' one of the great rites of passage of adolescence.

That month's issue of Epic Illustrates sports a cover by Howard Chaykin: 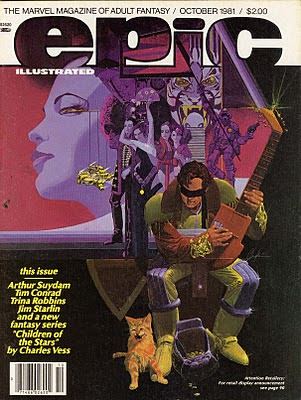 There isn't too much I want to comment on in this issue because, aside from an installment of Metamorphosis Alpha, which is quickly winding to a close, the rest of the magazine is filled with fairly unremarkable short stories.  This, of course, is a reflection of my personal bias.  I've never really enjoyed short stories very much, especially in magazines like Epic and Heavy Metal.  I far prefer longer serials with their greater depth of story telling and character development.

So, here's a synopsis of this this issue's chapter of Metamorphosis Odyssey.  With the Zygoteans in hot pursuit, Aknaton and his companions race for the planet Dreamsend, resting place of Aknaton's apocalypse weapon, The Infinity Horn.  They arrive at the temple in which the horn has been kept for 100,000 years, just ahead of their pursuers. While Vanth remains outside to hold off the Zygoteans, Aknaton leads Juliet, Za, and Whis'par inside and down a seemingly infinite staircase to a different plane of existence - the mystic heart of the galaxy.  They arrive at Aknaton's Hall of Death and Mercy, which, surprise, surprise has the ubiquitous skull entrance.

Within, they retrieve the Infinity Horn, with which Aknaton hopes to destroy the galaxy and create a fresh start for Juliet, Za, and Whis'par to create a new and innocent race.  Aknaton then leaves them with the horn, and goes to make his last stand with Vanth at the temple entrance. 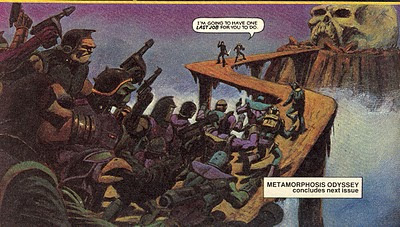 I have something of a preoccupation with old newspaper and magazine advertisements, and I find it interesting that most of the ads in Epic don't seem to be targeted at a particular audience, namely the fantasy/sci-fi crowd.  Instead, the ads are for mainstream products like TDK cassette tapes, Purolator oil filters, and Yukon Jack Whiskey (the "black sheep of Canadian liquors").  One of the only ads specifically targeted to Epic's readership is the series of Dungeons & Dragons adventure ads.  These are pretty neat because they have a sort of ongoing story line in each ad. 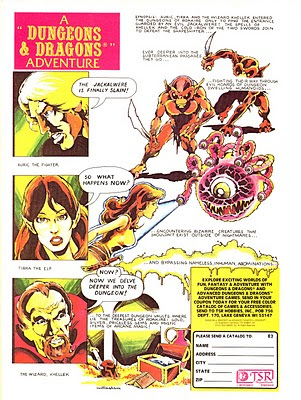 In this one we are treated to a synopsis of the dangers so far encountered by Auric, Tirra, and Khellek, who have slain the Jackalwere they encountered in the last ad.  They ponder what to do next, and Khellek advises that they delve deeper into the dungeon, to the deepest vaults where lie the Treasures of Roakire.

It kind of makes me want to play D&D.  Must be an effective ad.
Posted by Sean Robson at 6:08 PM

I love me some Metamorphosis Odyssey.

Me too. I think this would have made a great graphic novel.