If I were pressed to choose my next-favourite game after D&D, I'd probably be tempted to name either Traveller or Call of Cthulhu, but neither answer would be strictly true.  Traveller was the second role playing game I ever bought and I spent countless hours reading the books and drawing maps in my Judges Guild Astrogator's Chartbook, but I didn't spend anywhere near as much time actually playing the game as I did studying it.  Truth be told, I was a pretty mediocre Traveller game master; I wasn't wasn't well-read enough in the science fiction genre to design good adventures and what I ran was more like D&D in space than good sci-fi.

I played Call of Cthulhu even less.  I had difficulty convincing my friends to play a game of library research with death or madness as the final payoff.  Furthermore, running a multi-layered mystery while maintaining suspense and evoking a sense of fear required quite a bit more skill than I possessed.  Call of Cthulhu has been a big influence on my gaming ever since, but I've only ever run one short campaign.

The game that I actually played the most, after D&D, was TSR's Top Secret.  I didn't suffer from the same shortcomings as a Top Secret Administrator that I did as a CoC Keeper or Traveller Ref.  I was widely read in the genre, having consumed mass quantities of John Le Carre, Graham Greene, Frederick Forsyth, Len Deighton, and of course Ian Flemming.  And flipping through a newspaper gave me all the adventure ideas and plot hooks I could ever want.  It was a genre that I took to like a duck to water. 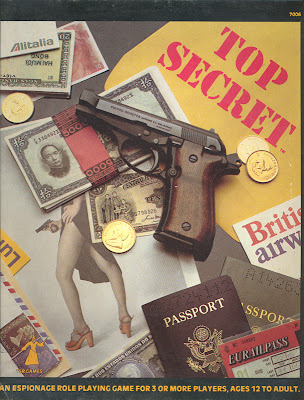 I owned, and played, most every other espionage game published in the '80's including Victory Game's James Bond 007, Hero Games' Espionage, and TSR's late '80's game Top Secret S.I., and all of them had some admirable qualities.  James Bond 007 was particularly popular but, in my opinion, neither it, nor any of the others held a candle to Top Secret.

The reason that I kept coming back to it is that Top Secret, written by Merle M. Rasmussen, is quite possibly one of the best role playing games ever written; certainly the most underrated.
But it wasn't until just recently that I've come to appreciate just how brilliant the Top Secret game is.  I took its many qualities for granted back in the days when I played it, but in light of the perspective that several decades has given me, I've come to realize that what Merle Rasmussen achieved with this game is truly remarkable.

The game's sixty-two pages of rules are crammed with more useful goodies than you'll find in contemporary games whose page counts are in the hundreds.  In this respect, Top Secret is perhaps the ultimate "tool-box" game.  It contains no chapters devoted to background information or setting, and no advice on how to run it.  Instead its pages are filled with tools you can use however you wish.

Consider the economy of the following Table of Missions: 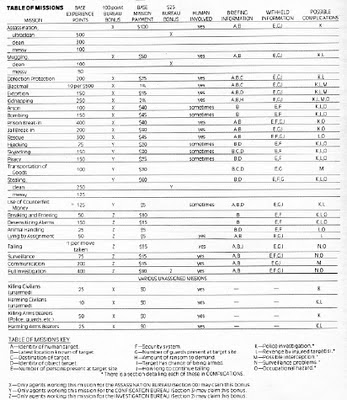 The table provides a long list of jobs, with the base experience points and mission payment for each, along with relevant briefing information, information withheld, and possible complications.  This is one of the niftiest tables in the game and allows the administrator to quickly come up with missions on the fly and flesh them into full-fledged adventures with little effort.

There are also random tables for just about everything you could want.  Here's a list of tables just pertaining to police: number and type of vehicles pursuing, police weaponry carried on self, police weaponry carried in vehicle, and a police cuffing table.  This is the sort of stuff I really appreciate having tables for - it's the kind of information that I might need to have at the spur of the moment, and having a random table keeps me from inadvertently defaulting the same answers every time.

There are also rules for special vehicles, building custom weapons and equipment, and constructing a headquarters.  Whether you want to build an island villa on the Adriatic or a secret underground lair, you can calculate the construction costs then trick it out with all the security systems you might need, including guard towers, mine fields, and traps.  There's even a table of specialist personnel to staff your headquarters, and their annual salaries.

The appendices at the end of the book include a two-page list of espionage and terrorist organizations, a list of major languages of the world, and a five-page glossary of espionage-related terms

I could go on and on, listing all the awesome stuff included in this book, but I only wanted to illustrate what made Top Secret such a wonderful tool-box, not write 'cover-to-cover' review.  What makes the sheer volume of material even more remarkable is the fact that Merle Rasmussen wrote most of this game during his first year of university.  This is a time when most students are trying to adjust to a whole new academic tempo, and struggle just to keep ahead of their school work.  Rasmussen managed not only that, but also devoted an enormous amount of time researching and writing this magnum opus of espionage role playing.

So here's the beauty of the Top Secret rules: it gives you all the tools to play any way you want in just 62 pages, then it gets the hell out of your way.  I wish there were more games that adopted this philosophy.  I've never seen it's like since, and I doubt I ever will again.
Posted by Sean Robson at 3:26 PM

I agree with most of your post. But imagine if it had been 64 pages!

I never played that edition of Top Secret, though we did play Top Secret/S.I. Our game was probably more Nick Fury: Agent of SHIELD influenced than the intended inspirations (well, except maybe Bond).

@Saxon Violence: That is truly the coolest and most appropriate word verification I've seen in a long while.

The book was 64 pages, but the last two pages were the character sheet, so I just count it as 62 pages of rules.

@Trey: I played S.I. as well. Also a good system, but not as free-form as the original.

It's nice to see someone giving the original Top Secret the love it deserves. Like you, it was my second RPG after D&D (not necessarily in order of purchase). In fact, it may have received more game play and behind-the-scenes prep time than D&D did.

Unfortunately, it does have some warts that became especially apparent after I picked up TS:SI. Namely, its combat systems; hand-to-hand combat, in particular. If only the elegant TS:SI combat system had made its way into original Top Secret - I think that would have made the game perfect in my book.

Hi Christopher, the hand-hand combat system in Top Secret was, indeed, cumbersome and complicated. I did really love the diceless attack/defense manoeuver tables in principle, though. If only they'd been a little more play-friendly...

I can't remember how S.I. handled hand to hand combat - I no longer have a copy of the game and it's been far too many years since I played it.

This was nicely written and I enjoyed reading it. I like that Rasmussen wrote it during his first year of university. That was interesting. And I love the tricked out underground lair. I'd build me a tricked out kitchen/lab with an eight spider burner and of course, Ethel (new fridge), would be there.

Thanks, Whisk! Would that tricked out kitchen include alarm systems and traps to deter Tim's midnight ops to infiltrate Ethel?

Ah, Top Secret. That game brings back many memories. I think we played TS much as Trey mentioned. Nick Fury/S.H.I.E.L.D. was a big influence on our approach to the game. Somehow 007 never appealed to me as a kid. I liked the movies, but never wanted to play a suave, debonair secret agent. I wanted to play more of a rough neck man of action and daring-do.

Yeah, super spies like James Bond never appealed much to me when I was playing, either. I preferred specialist teams to one-man wonders. I was influenced more by all the Mission Impossible, Man From U.N.C.L.E. and Get Smart reruns I watched as a kid. I always wanted to be Ilya Kuryakin.

I believe it would, yes.