Issue #5 of Epic Illustrated saw the magazine switch from quarterly to bi-monthly publication.  Almuric and the Elric story, The Dreaming City concluded in this issue, which is unfortunately missing from my collection.

Issue #6 from August, 1981, features a cover by Barry Windsor-Smith, an artist whose style I've never been able to appreciate.  He was the artist on the earliest issues of Savage Sword of Conan, and I always felt that his portrayal of Conan was too effeminate, his style too delicate for Savage Sword.  He also served a short stint as guest-artist on X-Men in the mid-'80's, which also didn't suit my fancy.  Nonetheless, his cover for this issue of Epic isn't bad at all, and though I dislike his characters I admire the scenery in this piece. 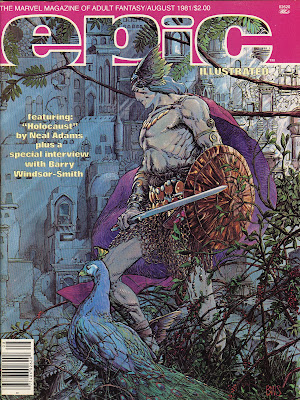 This issue was a bit weak, consisting mainly of short stories to fill the gap left by the end of two of the magazines previous serials.  Short stories are tough things to write well.  Since there is little time for character and plot development, many authors fall back on trick endings and try to be profound and clever.  Most fail, and the stories in this issue were well drawn, but are of little note.

In this installment of Jim Starlin's Metamorphosis Odyssey, Lord Aknaton and Vanth return to pick up their allies, Juliet, Za, and Whis'par.  Aknaton reveals his plan to use the Infinity Horn to destroy the galaxy and end the Zygotean threat, hopefully paving the way for a new and better beginning.

The group's deliberations are interrupted by the arrival of a pair of Zygotean cruisers. 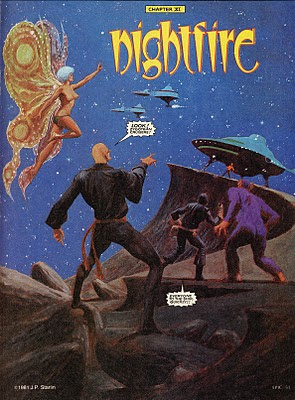 They board Vanth's heavily armed light cutter, which makes short work of the cruisers, but they are out of the frying pan only to land in the fire, as they find a Zygotean Dreadnought waiting in orbit. 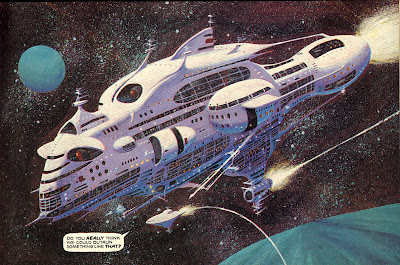 Vanth employs some sneaky tactics to exploit a weakness in the Dreadnought's defenses, destroying it, and then the group is off to their last stop - a planet called Dreamsend.

There were some nostalgiac advertisements in this issue, including one for the Heavy Metal movie, which was released in August, and the first of a series of Dungeons & Dragons Adventure ads, which I'm sure many  of us will recall: 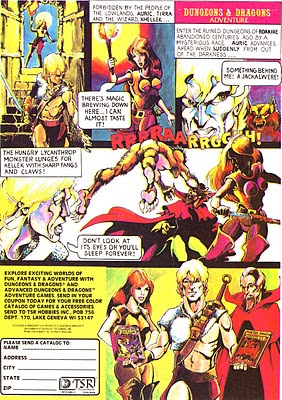 Epic was great for a while there. They were wise enough, IIRC, to keep their covers slightly more tame than their counterpart's (HM). Mom's eyebrows hardly even moved.

This is exactly why I was allowed to buy Epic, while my mother frowned upon Heavy Metal.