The autumn of 1980 was a turning point in my young life: I started high school, attended my first rock concert (Prism), and best of all I discovered D&D.  This was also something of a turning point in Epic's young life as issue #3 hit the stands, chock full of awesome.  The magazine, which had suffered a slow start was beginning to hit it's stride. 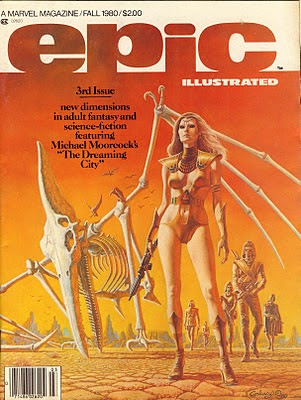 The cover, by Paul Gulacy, is compelling and engimatic.  We've got a sexy woman with creepy eyes leading a small troop of soldiers across a desert hard-pan with a giant skeletal pterosaur in tow.  I have no idea what's going on here, but my imagination has spun out more than one tale over the years.  I think that's the sign of a great illustration - it leads you down a path to a story of your own telling.

The issue kicks off with an Elric story, The Dreaming City, adapted by Roy Thomas and illustrated by P. Craig Russel.  I enjoy Roy Thomas' adaptations of Robert Howard's works, but much of what I love about Moorcock is the eloquent flow of his writing, which doesn't translate well to a graphic adaptation such as this.  I'm also not to fond of the art work, so while I like the idea of an Elric adaptation, it didn't come off quite as well as I'd hoped. 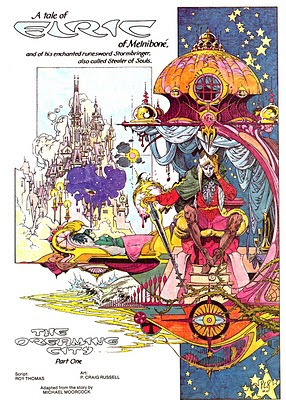 Jim Starlin's Metamorphosis Odyssey continues as Lord Aknaton travels to the planet Vega in search of a man named Vanth who wields a power sword that Aknaton had planted on Vega centuries ago.  Vanth makes his fortuitous appearance just in time to save Aknaton from a zygotean Alpha Team. 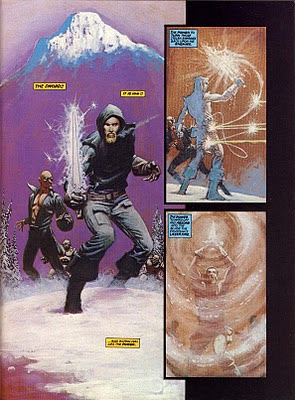 This issue's installment of Almuric picks up with Essau Cairn, captive of the beast men of Koth, battling their mightiest warrior, Ghor, in the arena.  When Cairn finally defeats Ghor he is taken before Khosuth Skullsplitter, the ruler of Koth, for judgement.  Skullsplitter proclaims Cairn to be a man of Koth and bestows the name Iron-Hand upon him. 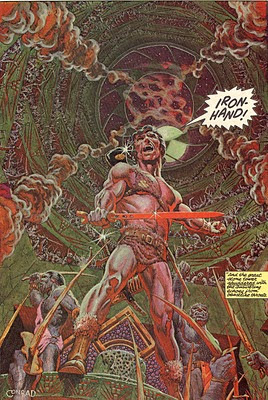 One day, while hunting, Essau Iron-Hand happens upon a Kothian maiden, Altha, fleeing from a carnivorous terror-bird.  Essau slays the bird with his carbine and strikes up a conversation with Altha, whose beauty has obviously captured his fancy.  They are suddenly set upon by a flight of Yagas; evil, winged men who dwell in the grim city of Yugga, on the rock Yuthla, by the river Yogh, in the land of Yag (try saying that five times fast).  Naturally, during the battle, Athla is taken captive and borne away by the Yagas, and in fine pulp tradition, Essau follows in hot pursuit.  The chase leads Essau to some ancient ruins where he finds the dead bodies of the Yagas littering the court yard.

Heedless of the unknown horrors that lie within, Essau proceeds into the ruins in search of Altha.  He eventually finds her, taken by fearsome dog-headed men.  Just as Essau is in danger of being overcome by the  dog men, they flee the battle as an even more dangerous threat approaches from behind. 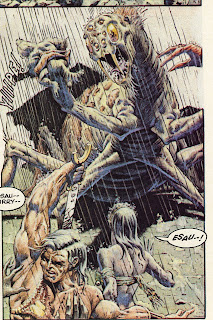 Essau quickly dispatches the horror by toppling a large block onto its head, then escorts Altha out of the ruins and they begin the long journey back to Koth.

The issue is rounded out by a number of excellent shorter stories including the beautifully drawn and disturbing dystopian tale, Libido, by Doug Moench and Paul Gulacy, who will eventually team up on the Epic Comics science fiction series Six from Sirius, which I also collected throughout its run.
Posted by Sean Robson at 2:39 PM

I'd forgotten Six from Sirius. That was a good series.

I really like Paul Gulacy's artwork and I thought he and Doug Moench made a great artistic team. I think I'm going to go to the basement and see if I can find Six from Sirius. I haven't read it in 20 years.

I really appreciate you sharing these, since I missed them back in the day :)