Session 5: Did Anyone Bring Rat Poison?

As exploration of the dungeon continues it is becoming apparent that the degenerate humanoid inhabitants have been training various vermin to guard their halls, including borer beetles, giant spiders, and rats.  Indeed, the upper levels of the ruins of Thrace have been utterly infested with vermin, and stirges and rats have proven to be particularly lethal hazards to exploration.  Yet, a surreal encounter this session raises the question of whether something more sinister may be at work.

Opening a dungeon door, the party spied a nest of especially large and fierce-looking rats.  Having had enough rat-bites to last a lifetime they elected to spike the door shut then head back to camp to buy some flasks of oil and immolate them from afar.  Returning an hour later, the room was now empty; the rats having exited through the doorway on the other side of the room.  The party had counted on the rats staying put until they got back with the oil; they are just dumb animals, right?

Passing through the room and through the far doorway, the party found themselves in a narrow, labyrinthine passage.  As they slowly proceeded they heard a voice crying out for help, just ahead.  Ignoring the voice, they decided to explore a side passage and a few minutes later, heard the same voice crying out behind them.  Returning to the place where they heard the voice, they found nothing.  This same thing kept happening as they explored the labyrinth: voices in the dark behind them or around the next corner calling out for help, or persuading them to "come and play."  Yet they party was never able to find the source of the voices.

It turned out that the voices were those of the rats, themselves, who were attempting to herd the party into to their main nest, a great hall in which the party was attacked on all sides by a swarm of giant rats, led by an enormous, hideously mutated nest mother.

Ironically, the monstrous rat-mother was killed without her inflicting a single wound on the adventurers, though the normal rats proved a considerably more difficult challenge, and they inflicted some serious wounds before the characters managed to kill them all.

And, thus, the session ended with the mystery of the weird talking rats and their mutant nest mother, and what, if anything, they signify.

This session was also the first in the campaign in which no player characters were killed and it was a welcome respite to end a session with players high-fiving instead of rolling up new characters.

In yesterday's mail, I received a shipment from Reaper Miniatures.  Any order of at least $40 placed during the month of October also received a Halloween goody-bag.  Here's mine: 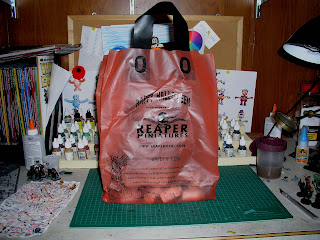 Inside the bag were three bottles of Master Series Paint, plus a special bottle of pink paint created to support Breast Cancer Awareness Month, a pack of playing cards with C.A.V. (Combat Armoured Vehicle) logo, and a bag of candy. 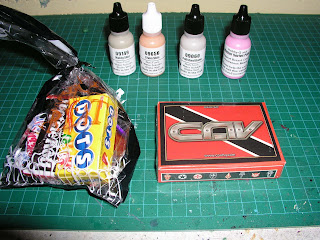 And, best of all, each bag included either a Halloween miniature treat or trick.  I got.... 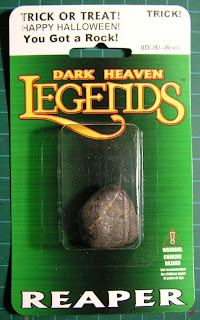 Is it any wonder I love ordering from these guys?  What a great swag bag!
Posted by Sean Robson at 5:51 PM 4 comments:

I just wanted to pass along, for anyone who hasn't already heard, news of Jeff Dee's kickstart project to recreate the art from his TSR projects, eventually to be compiled in an art book.  He plans to start with the Egyptian chapter from Deities and Demigods, and progress to the other chapters, including missing illustrations that were never completed for the original book.  According to Dee, all of his original art work was thrown out by TSR, so he has to recreate all of the illustrations from scratch.

This would be a pretty neat project, as Dee's artwork graced a lot of AD&D books and adventure modules and, along with Sutherland and Trampier helped create the iconography of the game. 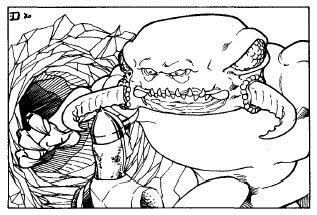 Posted by Sean Robson at 3:41 PM No comments:

This session, a good deal more of the level was explored and mapped, and various and sundry vermin were exterminated.  After continuing to track Sathera's adventuring party through the dungeon, the PCs finally found their remains - entangled in nets and gnawed upon.  The perpetrator of the gnawing was the subject of much debate until zombies from a nearby room shambled in and settled the debate.

Although the rescue mission ultimately failed, the upswing was that the PCs got to loot the bodies of the missing party, thereby obtaining a shiny new +1 longsword.  Also, Sathera was not among the bodies of her comrades, and evidence suggests that she was dragged off, so hope remains of her survival.

The session ended, again, in a fight with the black-robed, pale-skinned zealots who were gambling on a fight between a borer beetle and a giant spider when the party came upon them.  Just as the previous session ended with these albinos killing Thorsten the sorcerer, this time they killed that same player's new character.  The turnover rate of characters is such that players are refraining from naming them.  Aside from the two longest running characters, Thomas and Ebin, the characters are referred to as The Thief, The Warrior, etc., and the most recent new character is called New Guy.
Posted by Sean Robson at 8:55 AM 5 comments: