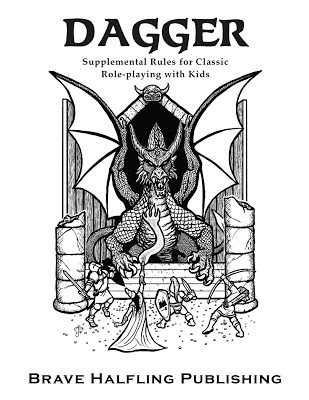 Dagger is Brave Halfling's new rules supplement that strips down classic D&D to its barest essentials for playing with very young children.  Most of this stripping away is done to the character classes to make it fast and simple to get started, without having to learn a lot of rules.

There are four basic classes: Knight, Wizard, Elf, and Dwarf, with an optional Halfling class.  No attribute scores are used, and each class gets equipment package so there is no need to fiddle around with starting gold, shopping, or armour types.  Players can just fill out their character sheets, roll for hit points, and begin play immediately.  Knights get two attacks per turn and have AC 2, Wizards can cast two spells per experience level and have AC 9, Elves get one attack per turn, may cast one spell per experience level, and have AC 5, and Dwarves can automatically detect secret doors, can see in the dark, and have AC 2.

The supplement is only eight pages long (including the cover and the obligatory one page OGL) and the meat of it is on the first two pages.  The remaining four pages include spell descriptions and some monster stat blocks.

This supplement is a great resource for role playing with very young children who are not yet able to read and would otherwise be confused by the esoterica of a full-blown version of the game.  There are a few problems, however: there is a monster attack matrix, but no character attack matrix.  I'm not certain whether this is by design or accident, although the monster matrix appears twice so I'm inclined to believe the latter.  To-hit numbers are given for first level characters, but there is no progression for subsequent levels.  It is possible that characters are intended to use the monster matrix, but this is not explained, and if so, it would make more sense just to call it the 'attack matrix.'  In any event, the monster attack matrix is missing the armour classes, so it's of no use anyway.

Lack of usable attack matrices is no problem for experienced role players who will have access to them in other rule sets, and since the supplement contains no explanation of how to play, no equipment lists, and no treasure, a full rule-set of some type is required anyway.  This makes the four pages of spell description and monster stat blocks redundant, though; Dagger could just as easily be a two-page supplement and might be better served if it was.

It's tough to complain though, given that Dagger is available as a free download from RPGNow and DriveThru RPG.

A New Blog For New Times

Things have been pretty quiet here the last few months, and my posts have been few and far between.  There are a couple of reasons for this: after nearly three years of blogging about old school gaming I'm starting to run out of things to say, and I've lately been devoting most of my time to writing fiction.  I've dabbled at writing short stories, on and off, for the past twenty-five years and I've accumulated a good few rejection letters over the years (yes my stories go back to the days when they were submitted and rejected via the post office).  Anyway, I've decided to stop dabbling and get serious about the craft.

As part of this new path I'm on, I've started a new blog, Lore Deposits and Other Rich Veins, which is a platform to promote my fiction, but is also a broad forum for me to post about writing, books, movies, natural history and other things that interest me, including gaming and miniatures.  And it is there that I will be most actively posting from now on.

So my posts here at the Flaming Faggot are going to continue to be infrequent for the foreseeable future, though I will try to make at least a couple of posts each month - I'll try to keep up my session reports at least.  I'll also continue to follow and read all my favourite old school blogs and remain part of the OSR community, but with less active participation.

I hope you'll all join me on the new blog.  Although it isn't as gaming-centric as this one is, there will be plenty of interest, especially since many of you share my interests and tastes in literature, movies, and geek culture.