Ever since I started playing Tunnels & Trolls, back in November, I've been on the lookout for a good character sheet, and to date I haven't found one that was able to accommodate all the information that I like to have on hand, especially adequate equipment and spell lists.  After all, the well-prepared dungeon delver is going to want to be fully equipped to deal with every eventuality, and you need a character sheet to keep all your stuff organized.

So I decided to make my own; it's a two page file in landscape view, which is meant to be printed on both sides of a single sheet of paper and then folded in half to create a compact 5.5" x 8.5" booklet.  I've posted images of what the pages look like below, and anyone who is interested can download the PDF for free from DriveThru RPG:  http://www.drivethrurpg.com/product/189318/Deluxe-Tunnels--Trolls-character-folio?src=hottest_filtered 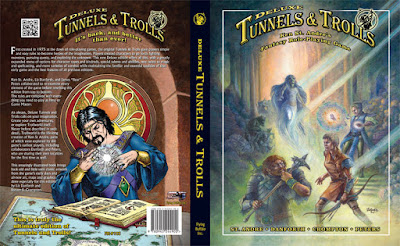 I've finally gotten my Deluxe Tunnels & Trolls softcover, and now that I've had some time to read, digest, and even begin the process of adopting some of the new rules to my current T&T campaign, I thought I'd share my thoughts.  This newest version of the venerable Tunnels & Trolls role playing game, which was first published in 1975, making it the second-ever rpg, is not so much a new edition as the ultimate expression of the game according to its creator, Ken St. Andre.

This is a weighty tome of 367 pages, beefy enough serve as a shield if  need be.  By contrast the popular 5th edition rules were a lean 90 pages.  The book is comprised of four parts.  The first part is the core rules, which have changed only a little since the 1979 5th edition rules that I'm currently using, and most of the changes are likely to be embraced by players.  Low attribute scores no longer give negative modifiers, all classes now have two type-specific abilities and one type-specific detriment, the list of spells has been expanded, and weapons can be customized with bonuses that depend on the materials they are forged from and the ability of the weaponsmith who crafted them.  The biggest change is that in place of the traditional method of gaining a new level once a certain experience point threshold has been reached, characters now spend their earned experience points to improve their attribute scores, and their level is equal to their highest ability score divided by 10.  So a character whose highest attribute score is between 3 and 19 is a 1st level character, and a character whose highest score is between 20 and 29 is 2nd level, and so on (this means that after factoring in racial attribute modifiers it is possible to begin the game as a second or third level character).  The experience point cost to improve an attribute by one point is equal to its current value times 10, so it would cost 150 experience points to raise your dexterity score from 15 to 16, for example.  This introduces some interesting choices for players to make: does one focus on increasing their highest attribute to gain new levels, albeit at an ever-escalating cost, or spend those points to more cheaply improve other attribute scores.

The next section of the book is devoted to elaborations, optional house-rules you can use to customize your game.  This part of the book is the gravy.  T&T, by the virtue of its simple open-ended rules, embraces the do-it-yourself homebrew ethic in a way that no other game has since the three little brown books of OD&D, and it has been doing so for more than 40 years.  Where previous editions have taken it for granted that players will tinker with the game's simple and elegant resolution mechanic to suit their individual tastes, DT&T takes it a step further by providing some neat examples just how flexible the system can be.

The last two sections of the book consist of an atlas of Trollworld, Ken St. Andre's campaign setting; and two adventures, one GM adventure and one solo adventure.

There's a lot to like about the new Deluxe Tunnels & Trolls, and it is refreshing to see the game updated without losing any of its old-school charm.  That's a very rare thing, and owes a lot to the fact that the game has remained in the loving hands of its creator since its inception.

Apart from the rules themselves there are things that I like and things I dislike about this book.

Pros
Art and Layout - the book is beautiful, inside and out.  Editing and layout was done by Liz Danforth, as was the cover art and most of the interior illustrations.  She chose a comfortable font size and generous line spacing that makes DT&T a treat for the eyes, which is something I'm coming to appreciate more and more as I get older.  Small, densely-packed text would have reduced the page count considerably, but I'm grateful for the easy to read, attractive text and I'm more than happy to pay a little extra for this.  The artwork itself is stunning.  If you aren't familiar with Liz's work on T&T over the past few decades, you may have seen her illustrations in I.C.E.s Middle Earth Role Playing Game, and her paintings in the Middle Earth: The Wizards collectible card game.  She has been the lead artist for T&T since the 1970's, and this gives the game a very consistent look and feel.

Physical Construction - the book uses high quality matte paper, which I really like.  Many modern rpgs use gloss paper, which I absolutely hate, and I'm so glad that DT&T steered away from it.  The binding, at least of my copy, is very good, which is an important consideration for a nearly 400 page softcover.  With cheap binding this book would fall apart very quickly, but I can see this one lasting for a long time to come.

Cons
Editing - While I have no problem with increasing the book's page count to allow for comfortable font size, line spacing and profuse illustrations, I am an absolute bear when it comes to excessive wordiness, as can be attested by anyone whose work I have edited.  To quote Strunk and White, 'vigorous writing is concise.' A sentence should contain no unnecessary words, a paragraph no unnecessary sentences, and a page no unnecessary paragraphs.  This does not imply that one should strive to be brief for brevity's sake, but to make every word count.  DT&T often suffers from rambling prose, and many of its paragraphs convey little if any information.  There's many a page that could have been reduced to a single paragraph, and this not only needlessly increased the page count, but served to confuse rules that could have been explained far more clearly and concisely in half as much space.

Index - a book this size needs a comprehensive index, but the index in DT&T is nearly useless.  For any rule you look up there is a long list of page numbers where that rule appears in the text, but no indication (by bolding or italics, as is the convention) of the main entry where the rule is explained - so you need to visit each and every page until you find what you are looking for.  To make matters worse, many of the index citations are incorrect, probably because some of the text was edited and rearranged after the index was compiled.  It's actually faster to flip through the entire book to find the rule you're looking for than it is to consult the index.  I know from first-hand experience how much work it is to compile a comprehensive index of such a large body of work, but given that this is likely to be the ultimate incarnation of T&T it would have been worth the effort to get it right.

So there we have it: despite a few things I wish had been done differently, Deluxe Tunnels & Trolls is a labour of love on the part of its authors, and a fantastic legacy for its creator, Ken St. Andre, and I'll be enjoying this game for years to come.

So you might still be wondering 'is Deluxe Tunnels & Trolls for me?'  It might be if:
1. You are looking for a simple, fast-paced, easy to learn rule system that is readily customisable and very easy to house-rule.
2. You enjoy having full creative control of a system in order to modify it to suit your campaign setting.
3. Are willing to put in the work to make this game your own.
4. Interested in exploring an important facet of rpg history.

It probably isn't for you if:
1. You're looking for a game with detailed rules for every situation.  You need to be able to make rulings on the fly in order to really enjoy this game.
2. Don't have the time or desire to customize the game.  There is no bestiary, and only a very rudimentary treasure table, so you'll need to create monsters and magic items yourself.
Posted by Sean Robson at 6:21 PM No comments: