Session Five: The Dungeon of Xenopus

Feted as heroes by the townsfolk for having put an end to the menace of the draugr, Hafrgim Bloodslakir, who had for generations haunted the Barrow Hills north of town, the adventurers enjoyed a night of revelry. Kragar the rogue was able to leverage his celebrity status to successfully seduce the mayor's daughter, Elise, after having suffered a critical fail on his attempt after first arriving in town.  Sometimes persistence pays off.

Flushed with success from their previous caper, the crew turned their eyes toward the intriguing tower ruins north of the old graveyard west of town.  Chatting up patrons at the Dragonfire Inn, they heard a number of often conflicting rumours regarding the tower ruins, but were able to determine that fifty years ago the wizard Xenopus disappeared and has not been heard from since, and that soon after his disappearance twisted, misshapen silhouettes could be seen capering on the tower's parapet, highlighted by an eerie green glow emanating from within.  They heard, also of the reclusive Whateley clan who dwell across the bay and shun the company of the townsfolk, and whose patriarch, old Algernon Whateley, was none other than Xenopus's apprentice.  A trip out to the Whateley homestead proved fruitless, as Algernon's daughter, Lavinia, set her sons, Yog, and Soth to drive off the interlopers, pitchforks in hand.  Giving up on interrogating the Whateleys, the adventurers decided to just dive into the tower ruins and see what's what.

The dungeon is, of course, the iconic Tower of Zenopus sample dungeon featured in the Holmes Basic D&D set.  This is probably the best sample dungeon ever created, as there is a great deal of story potential and threads that can be fleshed out for further use, and which suited my existing campaign perfectly. 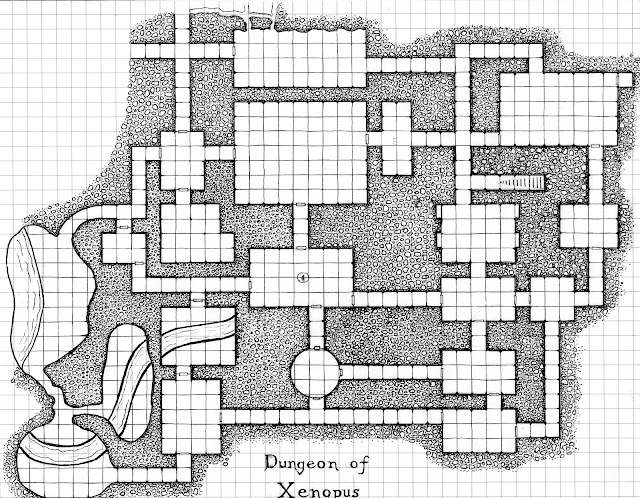 Over the course of exploring the dungeon beneath the ruins the pcs came upon a smuggler looking for his two missing mates, and learned that his crew is using the dungeon to stash smuggled goods for overland transport to Avarice.  They also encountered old man Whateley, himself, who has, with the assistance of goblin minions has taken over the dungeon and remaining effects of his old master to bolster his arcane power.  Whateley is an irascible sort who takes poorly to intrusion upon his domain, and had just finished creating statues of the two missing smugglers by way of a Medusa spell.  Leaving his goblin servants to deal with this new band of intruders, Whateley fled to his laboratory on the level below where he prepared a special welcome for anyone who followed.

After quickly dispatching the goblins, the pcs did, indeed pursue Whateley to his lair only to find him surrounded by the glowing nimbus of a protective spell, and a number of cages full of cockatiels.  These birds, which he dubbed Molotov Cockatiels were creatures of his own making, and he opened their cages, then detonated a thunder clap to panic them.  They flew madly about the the laboratory, burning the adventures while Whately remained safe behind his Protective Pentagram.  Hrothgar unwisely swung his axe at one of the birds, easily killing it, but its destruction caused it to explode causing even more damage to everyone around it.  Realizing that killing these birds could trigger a cascade of explosions that would kill them all, the wizard, Fenix grabbed book of arcane lore off a nearby table and threatened to let the birds burn it.  Enraged that someone would dare to touch his things, Whateley charged out of his pentagram, swinging his black iron staff.  This proved the end of him as Hrothgar buried his axe in Whateley's spine, killing him.

Thus ended the session with Whateley dead, and Fenix in possession of the old man's demon-bound staff deluxe, which he fears is more magic item than he can handle.  It also ended with all the characters getting enough XP to gain 2nd level.

Posted by Sean Robson at 1:19 PM No comments: 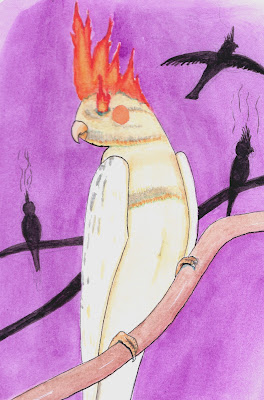 The product of experimentation by the mad mage, Xenopus, Molotov cockatiels smolder with intense heat, dealing 1 point of magical fire damage to anyone they touch, and setting fire to flammable objects.  While not aggressive, Molotov cockatiels are easily startled by loud noises and will fly into a panic, running into things in their attempt to flee.  This makes flocks of them dangerous, even more so if one is killed, because when they die the explode, dealing 2d6 points of magical fire damage in a five foot radius, which can set off a chain reaction of explosions if other cockatiels are nearby.

Posted by Sean Robson at 7:27 AM No comments:

Sessions Three and Four: The Barrow Crypt of Hafgrim Bloodslakir

We managed to squeeze in two game sessions during the holidays, during which the characters arrived in the town of Vermisport, two days west of Avarice, after winning a map of the tomb of the notorious Urgoth warlord, Hafgrim Bloodslakir.  As the players were keen to avoid the wrath of the cultists of Atlach-Nacha in Avarice, an extended vacation seemed in order.

While in Vermisport, the party established themselves at the Dragonfire Inn, owned by the dwarven innkeeper, Drungard Aleson, who is inordinately fond of his own brew, Dragonfire Ale ("burns going down, burns coming out") and never passes up an opportunity to drink with his guests - whether they invite him or not.  Of the party, only the doughty dwarf, Hrothgar the Red, was brave enough to quaff Dragonfire Ale with their host; the others stuck to gentler libations. 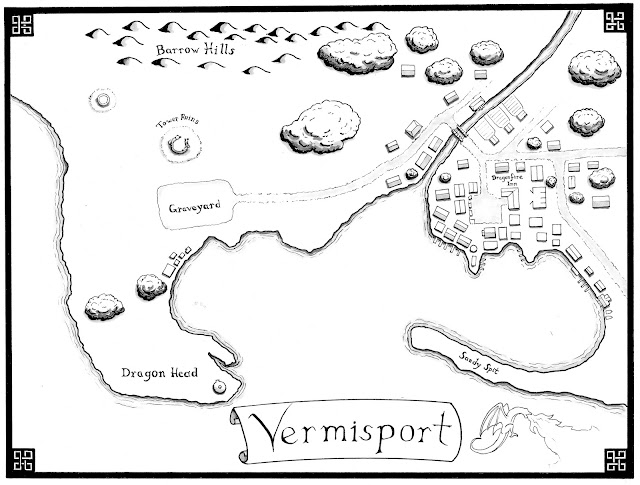 In preparation of exploring the Barrow Hills north of town, the party stocked up on supplies at the local outfitter: Madam Marigold's Muffins & Sundries (free muffin with every purchase!).  Marigold, a matronly hobb, expressed an interest in purchasing any artifacts or curios recovered from the barrows, and also offered to sell the party a map of the tomb of Hafgrim Bloodslakir - an exact duplicate of the map Kragar the rogue had won back in Avarice.  Rather than a rare, one-of-a-kind treasure, the map was a scheme concocted by the Vermisport JCs to promote adventure tourism in the economically depressed town.  The mayor and local shop owners felt that a steady stream of adventurers spending their loot in town was a business opportunity too good to pass up, and if one of them happened to put down the wight that had been haunting the Barrow Hills for years, all the better!

After hiking into the hills, and exploring a few of the lesser barrows, the party finally came upon the one they sought: the crypt of Hafrim Bloodslakir.  At the first intersection after entering the barrow, they found another party of adventurers buried beneath the rubble of a pitfall trap.  As these adventurers were all dead there was only one thing to do: go through their pockets and look for loose change.  In addition to loose change, one of the corpses also had one of the copies of the barrow map.  Thus forewarned that the crypt contained deadly traps, the party became even more paranoid than usual, afraid to put a foot down lest they trigger some unpleasant surprise. 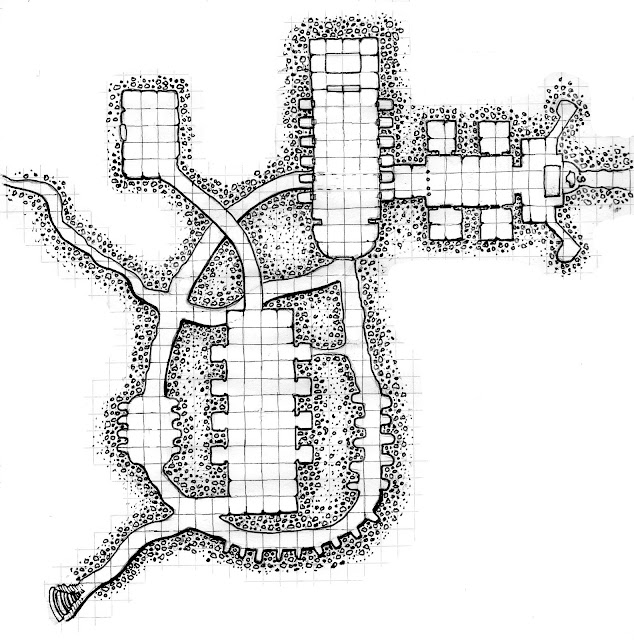 After thoroughly exploring and looting the crypt, the players confronted the final room in the northeast corner of the map, which they correctly believed to be the resting place of the wight.  They ignored the four alcoves on the north an south walls of the antechamber, and went straight to the room farthest east where the wight awaited them.  This was a wise choice, for had they opened any of the alcove doors all four would have swung open, dropping a portcullis at the entrance of the chamber, and releasing the zombies within, so they would have those to contend with as well as the wight.  As it was Bloodslakir, by himself proved to be a challenge, though he was eventually defeated without serious harm to the party.  Bloodslakir's treasure, a chest full of rubies was protected by a poison needle trap, which Kragar was clever enough to discover without being stuck by it and killed.

Their mission accomplished, the party returned to Vermisport to celebrate and lay plans to explore the ruins of the abandoned wizard's tower north of the old graveyard.

Posted by Sean Robson at 9:33 AM No comments:

I introduced boozehounds to my game a couple of sessions back, and the players got a kick out of them.  They suit the whimsical nature of Tunnels & Trolls, and the notion that players should at least be chuckling as their beloved characters are torn apart.

Boozehounds have an insatiable lust for alcohol.  They can smell it at great distances and will track it relentlessly once they've gotten a whiff.  A typical boozehound has a monster rating of 30, but for each round that they spend drinking booze, their MR increases by 10, to a maximum of twice their starting MR.  For old-school D&D style games, they have a typical hit dice of 2-3, and a 1d6 bite, but their HD increases by 1 each round they spend drinking, to a maximum of twice their starting HD.

The drunker they get, the nastier they become, so it's best not to let them get a snoot full! 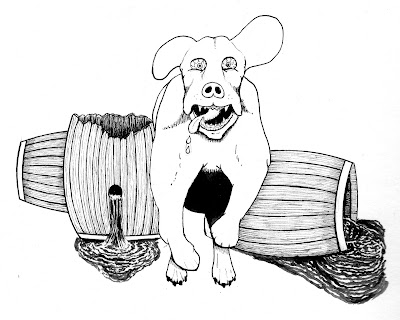 Posted by Sean Robson at 2:41 PM No comments: