The characters began this session the following day, nursing their hangovers at The Slippery Vixen while discussing whether to follow up on the treasure map that Kragar had won at the gaming table the night before.  They had just settled on an expedition to the Barrow Hills after suitable preparations had been made, when one of the tavern regulars announced that the body of Abdul Farouk (the fence to whom Kragar had sold the group's stolen gems the night before) had just been finished out of the nearby canal, showing signs of torture.  With this fresh intelligence, the characters decided that planning for expeditions was over-rated and that an immediate departure was just the thing.

They departed within the hour, catching a boat to Ferryton, on the mainland, where they booked passage with a supply carriage to Vermisport the following morning.  They spent a nervous night at the Ferryton Inn, with Kragar perched on the inn's roof all night keeping watch for spider cultists.  The night was uneventful, and they departed as planned shortly after dawn.

They arrived that night at Redjack's Roadhouse, the halfway house between Avarice and Vermisport on the Old Coast Road. 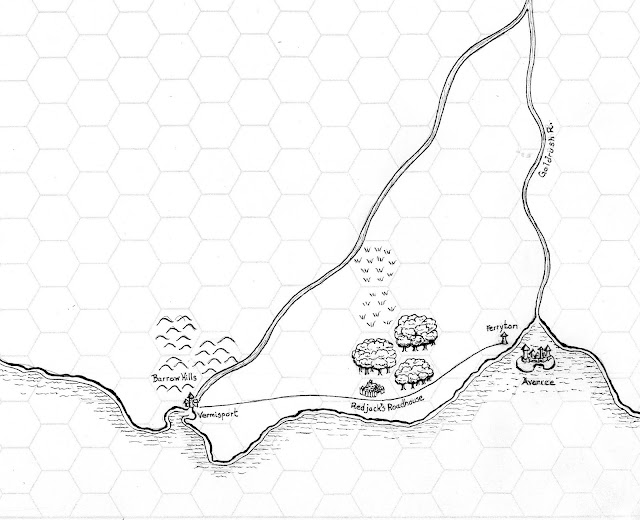 While socializing over supper and drinks, the players met Balzac Brightson, a mercenary, whom they hired to accompany them on their expedition in exchange for a 10% cut of the treasure.  At this point the session was cut short due to a player with food poisoning who could no longer continue.  With luck in the upcoming session the players will make it to Vermisport and commence their exploration of the tomb of Halfgrim Bloodslakir.

Posted by Sean Robson at 9:27 AM No comments:

My long spell of gaming drought has ended, and I've finally launched my new Tunnels & Trolls campaign that I've been planning for ages, but haven't been able to get off the ground until now.  It's been a pretty stressful year for me; back in the fall of 2020 I found out that my prostate cancer had become aggressive and I needed surgery as soon as possible.  Unfortunately the pandemic had other plans, and cancer surgeries were cancelled as nurses were reassigned to Covid wards.  I waited for nearly a year, stressed out and wondering if the cancer was spreading and becoming inoperable.  I finally got my surgery at the end of August, and just in the nick of time: the cancer had spread to nearby lymph nodes (which were removed for good measure), and was impinging on my bladder wall.  This latter will still need monitoring, but for the moment I appear to be cancer free.  Just as I recovered from that surgery I was back in the hospital a few weeks ago for emergency gall bladder surgery.  Now I'm on the mend from that, and barring any more organs that need removing, my health care woes are behind me, and I can finally look to the future.

And thus it was that I finally was able to return to the virtual game table last week to kick off a new sword & sorcery campaign!  I'm using my favourite 5th edition (1979) rules, with some elaborations from the Deluxe edition (2015).  The game is set on Ken St. Andre's Trollworld, but on a continent of my own design, Pentamer, the starfish continent, located on the far side of the world: 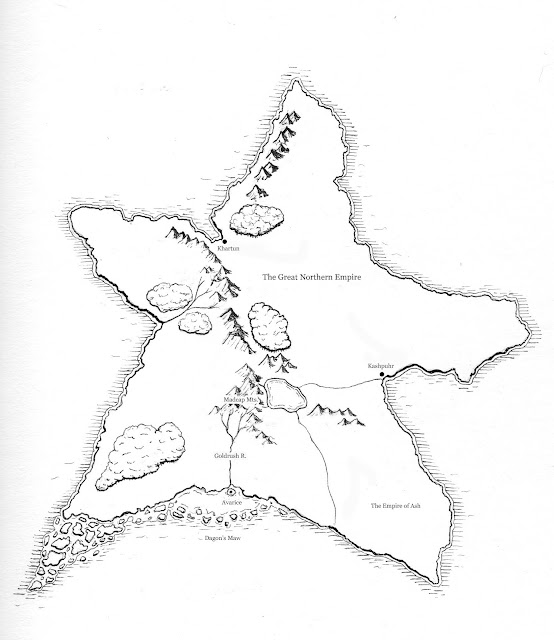 The campaign is set in the city state of Avarice, on the south coast.  There is as yet very little detail on the map of the continent.  I'll be filling in details as needed, and as the players explore their world.

The first session began with the PCs, Hrothgar, a dwarven warrior; Kragar, a vartae rogue, and Fenix, a vartae wizard carousing at their favourite tavern, The Slippery Vixen in the Flotsam district of Avarice.  Rumour going around the tavern was that the temple of the spider god had a brand new idol of Atlach-Nacha sculpted with huge rubies for eyes.  Our intrepid ne'er-do-wells decided that those rubies would be much better off in their hands than in those of a bunch of spider cultists, and so without further planning set off for the temple district to liberate them. 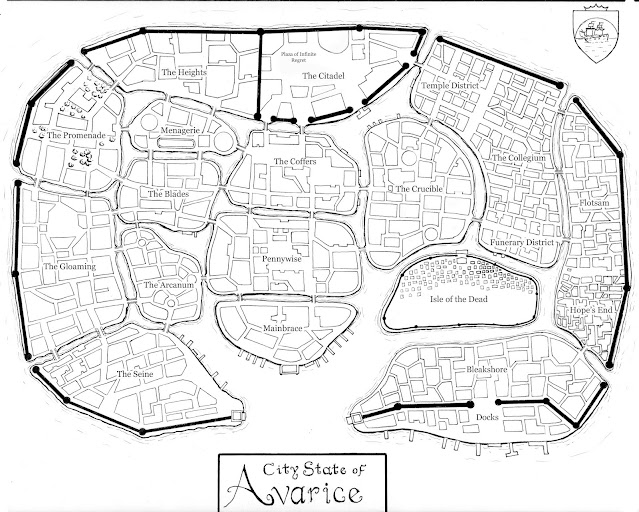 The caper initially went off without a hitch; temple guard patrols were quickly dispatched and the gems were pried out of their sockets.  Then the characters decided to explore the temple and see if there was anything else worth stealing, and walked into the quarters of half a dozen temple initiates.  Hrothgar was confident that he could tank the damage from a handful of dagger-wielding fanatics, but then an acolyte from the adjoining room cast Oh Go Away on him, and Hrothgar fled the battle, leaving the rogue and wizard feeling very much like Julius Caesar on the senate floor.  Fenix was able to kill the acolyte with a timely casting of Take That, You Fiend, but then the mob fell upon them, daggers plunging, and Kragar, and Fenix soon passed out from blood lost.  When Hrothgar was finally able to master his fear, he returned to the battle to stand alone against the mob.  He eventually cut them down but was, himself, very low on Con at that point.  He was able to stabilize his comrades and they decided to quit the temple while they were still alive.  Fenix cast a Lock Tight spell on the temple doors after they exited, to delay any pursuit, and then made their way home, rubies in hand.

Kragar took the gems to Abdul Farouk, a reliable fence, who took them off his hands for 800 gp, much of which the characters blew on a well-deserved carouse at The Slippery Vixen.  At the gaming tables, Kragar won a treasure map detailing the tomb of Halfgrim Bloodslakir, located in the Barrow Hills, just north of the town of Vermisport, two days west of Avarice along the Old Coast Road, and plans for the next money-making venture were laid...