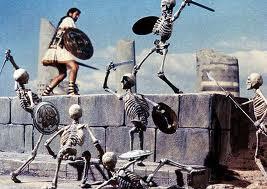 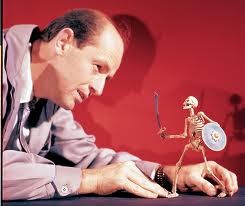 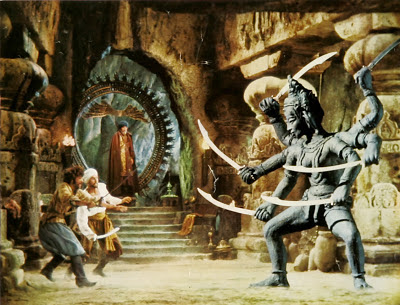 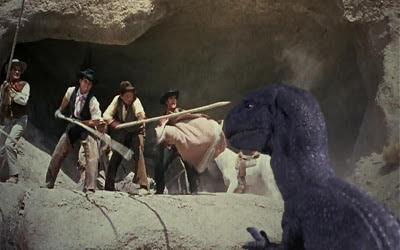 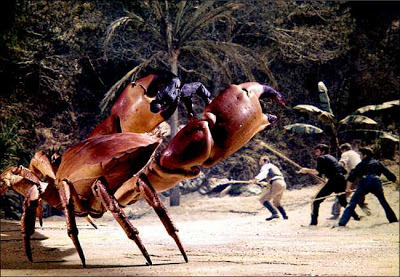 A legend has passed on today, and an era in film making has passed with him.  CGI effects will never thrill me the way Ray's hand-made models do and their absence takes a bit of the shine and magic out of movies today.  Special effects are now so pervasive that they are taken for granted rather than marveled at the way we did when a gigantic horror lurched onto the scene of one of Ray's movies.  He will be greatly missed.
Posted by Sean Robson at 1:09 PM 3 comments:

Following the harrowing end of last session, Morgan Lynch, P.I., got himself to the hospital to recover from the gunshot wounds he received from cultists of the Ashen Brotherhood.  Randal Carter decided to further investigate the Chalice of Antioch, which had been sold to Sebastian Crawe for the princely sum of $8,000, and arranged a meeting at Crawe's estate that evening to discuss it.

Meanwhile, Devin McTavish, a small-time thief, was casing Crawe's estate when he was interrupted by a car pulling into the drive.  Hiding in the bushes, he saw several men get out and burst into the house, and then heard gunshots ring out.  Two of the intruders came out of the house, hustling a heavy-set man with a bag over his head into the car, which pealed out of the driveway and into the night.  He wasn't able to get a good look at the intruders, but he did manage to see the licence plate as the car drove away.

McTavish sneaked in through the open front door and found two dead men in the entry hall.  He was standing over them when Randal Carter arrived for his appointment a few minutes later.  They began to search the house: Randal for the Chalice of Antioch; Devin for anything that wasn't nailed down and could fit in his pockets.  The chalice was not to be found, and Randal assumed that the mysterious assailants took it with them.  They searched the bodies; Randal recognized one of them as Sebastian Shaw's driver and body guard.  The other had no identification, but had a tattoo of a burning cross on his wrist: the sign of the Ashen Brotherhood.

Randal suspected that the Ashen Brotherhood was headquartered in the burned out Church of the Celestial Redeemer, and he convinced Devin to accompany him.  Since Devin was deeply in debt to Tony Gambini for gambling losses, and was eager to hock the valuable chalice, he agreed to go along.  They arrived at the church and saw the intruder's car parked outside it.  Randal and Devin watched the church for an hour until another car pulled up and two more people got out and entered the abandoned building.  Devin broke into a nearby building and called the police to report a disturbance at the church.

They waited still longer until a police car came to investigate.  Two officers went into the church, but never came back out.  Eventually, Randal and Devin screwed up their courage and decided to investigate the church.  They crept through the front door, and into the burned out sanctuary.  Having brought no flashlight with them, they were forced make their way by the small flame of Devin's Ronson Wonderlite.

Suddenly, the floor collapsed beneath them.  Devin leaped to safety, but Randal fell through to the basement, aggravating the old war wound in his leg.  Trapped in total darkness, Randal feared to move, lest he blunder into some hazard, and called up to Devin for help.  Devin found a stairway to the basement and discovered a store room that contained several boxes of candles.  He lit two of them, and by their slightly better illumination, he found Randal waiting in the room beyond.

They began to explore the narrow, claustrophobic passageways of the old church basement, ducking to avoid low-hanging steam pipes.  The walls were punctuated with burial niches, many of them dating back to the early 1700's and all of them recently broken into.  Eventually, they came upon a small alcove containing a statue, which concealed a shaft in the floor and an old iron rung ladder descending into the darkness below.

They climbed down the ladder into a short passage that opened into a large catacomb-like chamber with a sheer drop of twenty feet into water of indeterminate depth.  Stone pillars supported a narrow stone bridge across the chamber to a passage on the far side, but the bridge had several large gaps where the stonework had crumbled.  Likewise, a ledge ran around the length of the room, but it, too, had crumbled away in places, leaving a discontinuous path.  Wooden planks spanned between the bridge and the ledge, allowing cautious passage across the gaps.  As they made their way carefully across the precarious path, Randal slipped and fell into the water far below.  The water was deep enough to break his fall, but the splash disturbed something in the water.  A gasping moan echoed through the chamber, and though he couldn't see it in the darkness, Randal could hear something splashing toward him, gibbering and gasping with urgent need.  He frantically made for the edge of the room, where Devin could see a rusted iron ladder.  Before Randal reached the ladder however, something emerged from the black water in front of him, and wrapped wet, clammy hands around his neck.  Devin fired blindly down into the pit with his .22 automatic but failed to hit anything.  Randal managed to break away from the creature grasping him, and climb up onto the ladder, shaking off the reaching hands that grasped his legs.

Once they were safely beyond the catacombs and into the passage beyond, they descended a flight of stairs into a massive chamber carved out of solid rock, supported by stone pillars that had been carved in the likeness of suckered tentacles.  The chamber, which they realized was much older than the church that had been built above it, could not have been engineered by early 18th century miners, presenting an unsettling question as to its architects.  As the chamber was far too large for them to see across by the dim light of their single remaining candle, they made their way carefully along the wall, eventually coming to a stone altar that was stained in a brown coloured crust.  The wall behind the altar was covered with a large velvet curtain.  The investigators continued on, not daring to look behind the curtain, and found another staircase leading still deeper into the earth.  As they were about to descend, they were surprised by two robed cultists coming up the stairs carrying a large bronze calyx.  They killed the cultists, took their robes and lantern and carried the calyx back down the stairs.

They made their way into what looked like a laboratory, filled with jars, vials, flasks, and various apparatuses.  Sebastian Crawe was bound to an operating table, and two withered husks in police uniforms lay upon the floor.  A robed man demanded to know why Randal and Devin were not preparing the altar for the summoning ritual, and the cult leader quickly realized that his lair had been invaded.  Crawe screamed for the two men to flee and save themselves, but instead Randal drew his pistol while Devin grabbed his shotgun that he stashed within the calyx.  Chanting a blasphemous supplication to the dark gods, the sorcerer assailed Devin's mind with monstrous visions of an alien reality that caused him to faint dead away from the shock of it.  Randal opened fire on the sorcerer with his .38 revolver, emptying its chambers, but missing the target in his panic.  The sorcerer then cast his spell again, this time subjecting Randal to the mental anguish of the Great Old Ones.  Randal's mind snapped and he flew into a homicidal rage, throwing himself desperately at his assailant.  The two struggled desperately before the sorcerer was able to strike Randal across the head with his silver-headed cane, caving in his skull.  At this moment, Devin regained consciousness, groped desperately for his fallen shotgun and blew the sorcerer's head off with a blast of 12-gauge buckshot.

Devin freed Crawe, who told him that the Ashen Brotherhood was planning to resurrect Jaques de Molay, who had been burned at the stake for witchcraft in the early 14th century, and that the cult would soon be congregating in the chamber above.  The Chalice of Antioch was instrumental in completing the resurrection of Molay's incomplete remains and that it was somewhere in the chamber above.

The two quickly went back upstairs and drew back the curtain behind the altar to reveal a life-sized bas-relief carving of an enormous winged creature with the head of an octopus crushing men beneath his feet.  They discovered the seams of a door concealed within the carving and they entered the office beyond it.  Another door in the office led to a library which contained shelves of occult books and the chalice they sought.  Ignoring the books, Devin grabbed the chalice and the two fled from the church.

Sebastian Crawe told Devin that he was an agent of the Order of the Temple: remnants of the disbanded Knights Templar who had, for centuries remained true to their vows, and fought to protect the world from the forces of darkness.  The Ashen Brotherhood, on the other hand, was founded by renegade knights who escaped the arrests in 1307 and they were attempting to resurrect their Grand Master who was condemned to die in 1314.  Crawe offered Devin money to pay off his gambling debts if he, in turn, would help to destroy the Ashen Brotherhood.  McTavish, fearing for his kneecaps, agreed.