This week I'm continuing my discussion of the most outre of animal phyla, the echinoderms, this time focusing on the Class Holothuroidea, better known as the sea cucumbers. 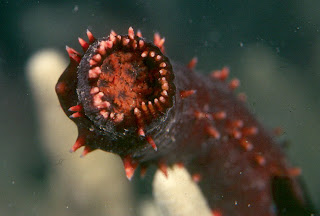 I find the comparative anatomy of echinoderms fascinating.  The phylum is, of course, united by its characteristic pentameral symmetry, meaning that its body parts come in multiples of five.  But also, although the different groups of echinoderms, such as starfish, sea-urchins, sand dollars, sea lilies, and sea cucumbers appear to be vastly different they all share the same anatomical parts, just adapted differently.  For example, the tube feet, which I described in the starfish post, are modified as tentacles surrounding the mouth of sea cucumbers (shown in the picture above) and are used to capture food.

Sea cucumbers have some truly interesting defensive mechanisms: when handled they violently contract their longitudinal muscles to dramatically shorten their bodies - the sea cucumber equivalent of rolling up in a foetal position and hoping you go away.  I must confess to having molested my share of sea cucumbers while diving in order to trigger this mechanism.  More interestingly, though, is that if they are seriously provoked they can expel their innards through their anus - you can, quite literally, scare the crap out of them.   Although this seems like an extreme and unadvised reaction, they can regenerate their expelled organs with no harm to themselves.  I think that any of us who have suffered the after effects of a night of hard drinking would envy sea cucumbers this ability.

Probably the coolest feature of the sea cucumber is the collagen that forms its body wall, which can be loosened and contracted at will.  This allows sea cucumbers to squeeze through any crack or crevice, effectively liquefying its body and pouring itself through the opening.

Sea cucumbers inhabit a wide range of depths in the ocean, from shallow water to deep water.  Indeed, they become more abundant at abyssal depths, as their collagen body wall allows them to adapt to great pressure, and they form large herds that roam the sea floor in search of food.

Sea cucumbers always look to me as though they should be one of the entries in the beautifully illustrated Call of Cthulhu book, S. Peterson's Field Guide to Creatures of the Dreamlands.

The following photos illustrate some of the beautiful variation of different species of sea cucumber - perhaps they'll serve to inspire some new Dreamlands creatures. 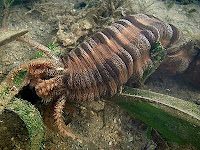 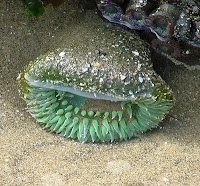 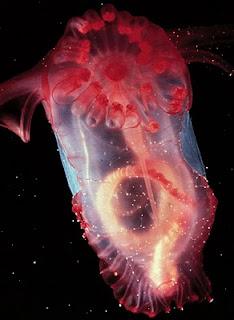 Yes, the top two photos in that last set definitely put me in mind of Lovecraft...

Sea cucumbers are also used in Chinese food and medicine. You can guess the alleged medicinal effect from the creature's expulsive ability.

I've never eaten one, but my SO has, saying, "It looks gross, it tastes gross, and it has a gross texture. Pretty much what you'd expect from looking at it. Tastes like dirt, too."

I've never tried sea cucumber, but I can't imagine they taste very good. People also each sea urchins - you crack open the shell and suck out the yolk-like innards. I've watched people do this, but have never been tempted, myself.