Assault on Angelis: Round Two

The second round of play in our ongoing Warhammer 40K campaign pitted Dark Angels vs. Tyranids and my Orks vs Chaos Space Marines.

My campaign special rule for this round allowed me to set up my army after seeing how the Chaos Marines deployed and gave me the first turn to boot!  Our mission was Capture and Control, and victory would go to the player who controlled the most of three objectives scattered across the table.

In my first turn I advanced towards the Chaos Marines fortified in the ruins with my warbikes and trukk (carrying my Warboss and Nobs), while the foot-slogging boyz and killa kanz followed behind, hoofing it at double time. 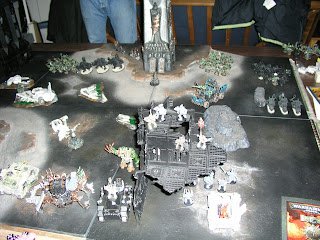 There are few things as awe-inspiring as an Ork horde advancing across the table top - except perhaps the firepower of Chaos Marines.  After my opponent's first turn of shooting the warbikes were mostly wiped out, my trukk became a debris-filled crater and there were fewer boyz in the ranks than I'd started with.

As my Warboss and his squad of Nobs bailed out of the burning wreckage of their transport, they were assaulted by a hideously mutated Chaos Dreadnaught.  Despite a few casualties inflicted by the twisted monstrosity, they brought it down with some well-placed blows from their big choppas, then continued to advance toward the bulk of the Chaos armoured units. 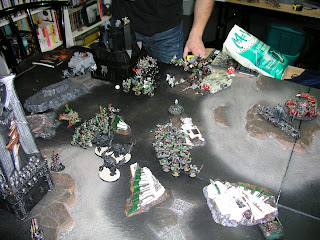 Despite the devastating firepower of the Chaos Marines shooting phases I was still feeling pretty good about my chances.  I was in control of one of the objectives, and still had lots of muscle to bring to bear as my three large squads of boyz continued to advance.  My Stormboy reserves still hadn't deployed, but I was counting on their deep strike ability to put them anywhere on the board they needed to be - hopefully swinging the tide of battle and chasing the Chaos Marine from the field in disgrace.

Predictably, that's when everything started to go wrong.

My Warboss and his Nobs managed to destroy the Chaos armoured Rhino, but were slain in turn, and since they are my most killy unit, losing them was a hard blow. 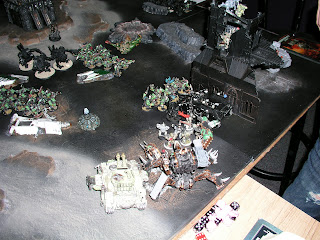 I diverted one squad of boyz towards the ruins to take out the shooters that were positioned on the upper floors.  They fought their way past a unit of Slaanesh marines outside the ruins, but then ran afoul of a tough unit of Khorne Berserkers who wiped my boyz out.  My other unit of Boyz engaged the crab-like Chaos Defiler, and destroyed it, but were slaughtered in the counter attack.  Only one Killa Kan survived to make it into combat and was quickly immobilized and its weapons were destroyed, rendering it a useless statue.

My last unit of boyz never actually made it into combat.  A sneaky Tzeentch sorceror kept using a dirty, underhanded psychic power to push them back further than they could advance each round, and they suffered constant attrition from Chaos Marine shooting attacks.

Finally, my Storm Boyz, led by the dreaded Boss Zagstruk entered the field and, using their jetpacks, they made a swooping attack onto the Khorne Berserkers, but were , instead, utterly annihilated.  The game was pretty much over at this point, but I made a last ditch effort to run my few remaining boyz to an unclaimed objective.  We were in turn five, the Chaos Marines controlled one objective, and the game could end at any time.  While victory was now impossible for me, if I could at least seize an objective I could force a draw.

Unfortunately, that tricksy Tzeentch sorceror wasn't done with me yet, and he used his dirty psychic tricks to force my boyz away from their objective.  Another turn of Chaos Marine shooting reduced my last squad to a single Nob.  I conceded the game at this point, since there was now no way for him to get close enough to the objective to claim it, and he'd certainly be shot to pieces during the next shooting phase.

While I had started out strongly with a great advantage in set-up, the game turned into a massacre; my entire force was destroyed while the Chaos Marines suffered only minimal casualties.

Over at the adjacent table, the Dark Angels had a bad run of luck and were wiped out by the Tyranid horde. So, now at the end of the second round of battle, each of the four players has one win and one loss - a pretty even match so far.  My next fight will be against the Dark Angels, while the Chaos Marines will test the will of the Dark Gods against the implacable might of the Tyranid broods.
Posted by Sean Robson at 8:48 AM