'I am being eaten alive!' cried Pippin. 'Midgewater! There are more midges than water!' - J.R.R. Tolkien
Like most of us, I have an utter revulsion for small biting insects, against whose predations there is little defense.  The first time I ever read The Lord of the Rings, I cringed in sympathy as the hobbits followed Strider into the Midgewater Marshes and in the years since, I've traversed many buggy places in the world, and have come to appreciate Sam's query, "What do they live on when they can't get hobbit?"  But never more so than in the last week.

Compare scene above from the movie, The Fellowship of the Ring, with the uncannily similar view from my bedroom window in the Churchill Northern Studies Centre. 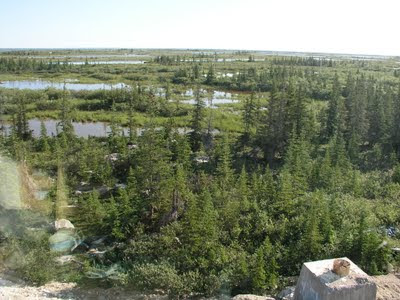 The following excerpt from The Lord of the Rings describes the Midgewater Marshes, but applies equally well to the tundra along the Hudson Bay coastline, where I spent the last week doing palaeontological field-work:
"The ground now became damp, and in places boggy and here and there they came upon pools, and wide stretches of reeds and rushes filled with the warbling of little hidden birds.  They had to pick their way carefully to keep both dry-footed and on their proper course."

In Churchill, too, the ground was damp, and in places boggy, with pools here and there.  There were also the cries of arctic terns and the sinister cackling of hidden ptarmigan.  But above all were the thick swarms of blood-sucking insects, including three different species of mosquitoes, black flies, horse flies, deer flies and, yes, midges.  Black flies and midges are especially annoying as they have the tendency to fly into your ears, up your nose, in your mouth if you are so foolish as to open it, and I was even temporarily blinded by getting one in my eye.

The picture above is Royal Ontario Museum palaeontologist, Dave Rudkin, approximately fifteen seconds after getting out of the truck as he stopped to load his shotgun.

One of the challenges of doing field work in settings like this is to remain focused on the job at hand while also keeping a constant eye out for approaching polar bears, all the while trying to fend off thick swarms of insects that are determined to drive you insane while they drain your blood.  Then there are diverting games, like competing to see who can kill the most mosquitoes with a single swat.  All in all, it becomes very difficult to maintain concentration under such circumstances and I now have an all-new appreciation for the effectiveness of the third level AD&D Druid spell, Summon Insects, which I have adapted for my Swords & Wizardry campaign.  The spell effects seem pretty realistic in my experience, and this would make an excellent anti-magic-user spell.

Conjuration of the Pestilential Swarm
Spell Level: M3
Range: 60 ft.
Duration: 1 round per level of the caster

This spell causes a swarm of flesh-eating insects to envelop the targeted victim.  The swarm deals 2 points of damage per round.  The victim is incapacitated while engulfed in the swarm, and is unable to take any action except to swat ineffectually.  If the target is killed before the spell expires the swarm can be directed at a new target.  The swarm can move 20 ft. per round.
Posted by Sean Robson at 3:09 PM

I can imagine what that must be like. Going to Alaska last month I experienced how tenacious the llittle bloodsuckers can be when their dawn and dusk times of greatest activity take up all of what would usually be night.

Yes, evening was the worst. We were usually out again after supper until around 9 and what was bad during the day became intolerable in the evening. I imagine your experience was very similar to mine.

Wow, that pic kind of creeped me out when i first say it. Are you sure they didn't suck out any cerebrospinal fluid? :-)

This is food for thought, especially given the setting book I am working on. Boggy wetlands are bad enough for mail laden adventurers to have to navigate, but add in blood sucking swarms of mosquitoes into the mix and things get REAL challenging!

heh, I look forward to possibly facing that conjuration this fall! :)

Yeah, the little blood suckers can drive you to distraction for sure. We've been really lucky in the peg this year what with the dry weather.

@Shane: hmm...cerebrospinal fluid-sucking insects. Mosquitoes of Leng, perhaps? I look forward to seeing your undoubtedly otherworldly take on an already creepy and unsettling group of creatures.

@Don: I was afraid that we would have a bad mosquito year after all the flooding, but I can't remember a summer with fewer mosquitoes than this one.

I got terrible shivers just looking at that shot of the back of (your?) head.

Not my head, I took the picture! But I do have a nifty picture of mosquitoes completely covering my hat (I had so much DEET on my face that they confined themselves to the hat).