Movie Review: Sinbad and the Minotaur

This past weekend I was checking out the new releases on Video on Demand and was delighted to discover a new Sinbad movie, Sinbad and the Minotaur, which was released this past June.  I checked out the trailer, and though the movie didn't look fantastic, I thought it might be fun and since I had an evening to myself I thought I'd give it a go.

Oh the humanity.  What I hoped would be a fun B-movie Sinbad adventure was just two hours of my life that I'm never getting back.  The scenes in the trailer represent the best this movie has to offer, and I must confess that leading with a dancing girl shaking her booty definitely helped to sway my regrettable decision to rent this.    The story was boring, the costumes were cheesy, the fight scenes badly choreographed, and the acting... it was Gina Davis bad.

The casting was also disappointing.  You'd think that in this day and age it would be possible to find middle eastern actors to star in an Arabian fantasy.  Instead, Sinbad was portrayed by Manu Bennett, a crew-cut-sporting white guy whose heavy Australian accent killed the mood almost as much as the perpetual kissy-face he made throughout the movie.

The slave-girl, Tara, played by Holly Brisely (shown above next to Sinbad) lacked any sense of exotic sensuality, and instead reminded me of nothing so much as a ditsy soccer-mom wearing a weird halter top.

Now, you'd think that in a movie entitled Sinbad and the Minotaur, there'd be an actual minotaur. Instead we are treated to a really goofy looking bull with glowing eyes and spiky skin.  By the time the 'minotaur' appeared the movie had already circled the drain a few times and was heading down the pipes, so the utter failure of the set-piece monster to evoke any awe only added insult to the already substantial injury. 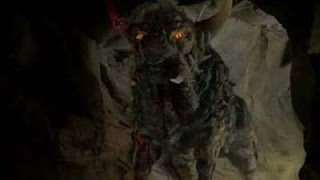 I kept waiting for Tom Servo and Crow to climb into their front row seats and salvage this cinematic crap-fest, but sadly, any mocking commentary will have to come from the viewers themselves.

The only contribution that this movie makes to the legacy of the Sinbad movies is to demonstrate unequivocally that Harryhausen is still The Man, and that Caroline Munro reigns undefeated as the hottest slave-girl in movie history.

Sinbad and the Minotaur ranks alongside such treasures as Highlander II, Dungeons & Dragons, Cutthroat Island, and Castaway - movies that steal your life and give nothing in return.
Posted by Sean Robson at 1:51 PM

Oh man, I've had this "beauty" sitting in my backlog of unwatched DVDs for weeks... I was actually thinking about it for later this week, but you've kinda killed my enthusiasm for that.

As you say, you can never beat a Harryhausen Sinbad... although what exactly is wrong with "a ditsy soccer-mom wearing a weird halter top"? ;)

although what exactly is wrong with "a ditsy soccer-mom wearing a weird halter top?"

Not a thing unless the ditsy soccer mom is supposed to be an Arabian princess; that's just plain wrong.

Even the trailer is less than B. The sets and locations are unimpressive.

They just don't make b-movies today like they did in our youth. At one time it seemed like (at least some) did the best with limited resources. Now they're just lazy.

A friend of mine warned me away from this one. Bennett is actually pretty in the Spartacus series, so I am sorry to hear that he dropped the ball as Sinbad.

@Aaron: Yeah. I know. It's my own fault, really; that dancing girl at the beginning kind of clouded my judgement.

@Trey: How right you are. The B-movies of yesteryear had a definite charm. They may have had small budgets, but many of them had good stories and a lot of heart.

@Shane: He didn't just drop the ball, he dug a huge pit and buried it.

way to take one for the team Sean. :)

Yep, it was a stinker. I kind of liked the cult of the minotaur idea, but it was implemented poorly. Why anyone would want to de-Arabianize Sinbad is beyond me.

And yeah, Caroline Munro sets the high water mark for this genre's slave girls, no doubt!

Thanks for the heads up. Thats two hours of my life not down the drain.

@Alcidas: Glad you saw the review before the movie; if I can save just one person the agony of seeing this stinker I stand gratified!