As summer gives way to autumn and the heat begins to wane, I find myself drawn to my paint station to resume working on one of my many ongoing projects.  Of late, I've been turning my attention to my long-neglected Warhammer Dwarf army.

The first thing I ever bought for this army was the character Joseph Bugman, the dwarf master-brewer. 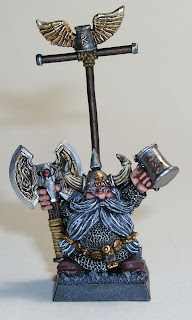 One of the conditions for using Bugman is that any army he is in must include a unit of longbeard rangers.  Longbeards are hoary old veterans, grognards in the literal sense; they've fought more battles, drank more ale, and endured greater hardships than any younger dwarfs could possibly imagine.  They grumble ceaselessly that nothing is as good as it was in their day; craftsmanship is poorer, goblins are wimpier, and the younger generation just isn't up to snuff.   Consequently, longbeards have the 'Old Grumblers' special rule that allows any other dwarf unit within 6" to re-roll any failed panic tests so as to avoid the endless litany of 'I told you so's' that the longbeards would bestow upon any panicky unit of youngsters.  I find myself identifying more strongly with longbeards the older I get, so including a unit in my army is a given.

Since Bugman is a pivotal character in my army, I've decided to play up the beer-drinking theme throughout the army.  My unit of  longbeard rangers are Bugman's Brewery Boys, the brewmasters and artisans that create the finest ales of the dwarf race.  To represent this I've modeled up a scenic 40 mm monster base that includes some ale barrels with a banner bearing Bugman's personal emblem stuck in the ground as proxy for the usual unit standard-bearer, as I reckon the Brewery Boys would be more inclined to rally round the ale barrel than anything else.

Including some barrels of Bugman's Best is not only characterful, but is also reflects one of Joseph Bugman's special rules; any unit he is with can drink from Bugman's tankard to refresh themselves, restoring a lost wound as well as making them immune to fear and terror.  This is going to be one tough unit of hopped-up axe-wielding maniacs.  I almost pity the monster that gets in their way.

What is a dwarf army with some fortifications to go with it?  I've also been spending much of the past week working on a fortified gun-battery terrain piece. 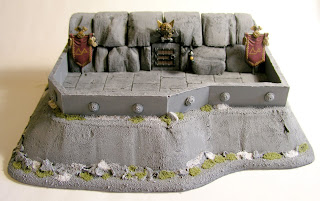 This is my first attempt at making my own terrain, and it was pretty straightforward.  The hill and rock wall are made from polystyrene insulation sculpted with a hot wire cutter and a sanding block, then mounted on a piece of hardboard for extra strength and durability.  The wall is made with foam core board.  Add some of the many extra dwarfy bits left over from various kits, a couple of layers of acrylic paint, finish off with some moss and snow, and voila!  A cheap-ass terrain piece ready to go.

Once I finish of the longbeard ranger unit, I'll just have a unit of miners to finish and then I'll have more than 2,000 points of bearded, ale-swilling hard-asses who are just itching to kick the tails of any skaven, goblins, or vampire lords silly enough to cross their path.
Posted by Sean Robson at 5:57 PM

Very nice! This reminds me that I still have a dwarf army for Hordes of the Things I need to get painted and based.

Thanks, Scribe. I recently acquired a PDF of Hordes of the Things but I haven't had a chance to read it yet. I hope you'll post pictures of your dwarf army when you get it painted.

very nice. I'm looking forward to getting a look at these up close... :)

Oh, I never pass up an opportunity to show off my work :)