As many of you are no doubt aware, last summer Games Workshop announced its new line of 'Finecast' miniatures - the brand name they've chosen for their resin-cast models.  They no longer produce metal-cast miniatures and are in the process of replacing their whole metal line with resin.

Naturally, this resulted in a storm of controversy, and opinions regarding Finecast are strong and fall into one of two camps: love it, or hate it.  I've been anxious to try out a Finecast model, myself, to see what all the fuss was about, and just before Christmas I purchased my first resin miniature; a Dwarf Runelord. 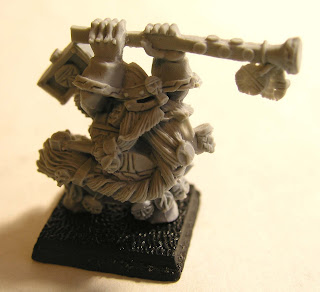 There are a few other advantages to casting in resin; the models are extremely light weight and low density.  Thus, when they are dropped or knocked over they are less prone to damage and paint chipping and are therefore well-suited to play on the table.

Resin is not without its drawbacks, however.  The main problem, which has plagued the Finecast line since its release, is the abundance of pitting on the surface of the model, which mars the appearance.  You can see an example of this pitting in the face mask on the Rune Lord model above.  In this case, the pitting isn't too problematic and can be explained as 'battle damage' to the helmet.  More serious were a series of fine pits in the beard, which were next to impossible to fill and really ruin the fine detail of the model.  The underside of the rune staff had a couple of really big pits, but since they were on a smooth open surface, they were easy enough to fill with greenstuff. 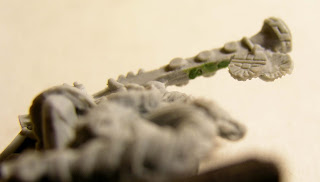 The pitting on this model was not terribly serious, and though I am somewhat dissatisfied it wasn't bad enough to warrant a return, and it is no where near as bad as some of Finecast models that I've seen on other people's blogs.  Apparently resin is far more damaging to the moulds than metal is, wearing them out much more quickly.  I suspect, that in an effort to maximize profits, Games Workshop has been pushing the moulds beyond their useful life, which results in a number of very sub-par miniatures being released for sale.

One of the other drawbacks to resin is that it is extremely soft and fragile and the models come with excessive amounts of flash and mould lines, compared to metal miniatures.  GW has dismissed this, claiming that the models are easy to clean up by scaping a knife edge along the surface of the model.  This is probably true when the flash and mould lines are on flat open surfaces, but dwarf models, such as this one, are so small and compact that getting in and cleaning them can be tough, especially when the mould lines cut across the beard, as it did with mine.  Because the resin is so soft and fragile, extreme care must be taken when cleaning or damage can easily occur.

The final complaint with Finecast is the price.  Despite the fact that resin is a much cheaper material than metal, GW is charging the same price.  They also, rather unwisely, introduced Finecast along with an 'across the board' price increase, so you're actually paying more for a Finecast miniature than you would have for a metal one.  Given that GW's metal miniatures were, themselves, horribly over-priced, the cost for the resin miniatures is atrocious, especially in light of GW's poor quality control.

In the end, I'm not in one of the hate 'em or love 'em camps.  I'm still on the fence.  While I 'm a something of a traditionalist and prefer the heft of a good, solid metal miniature, I do see the advantage that resin offers, particularly for large and unwieldy figures that are prone to toppling over.  Small, character sized miniatures, on the other hand, have little to gain from being cast in resin, particularly if we are being asked to pay exorbitant prices for sub-par casts.  Games Workshop appears to have jumped the gun on the Finecast line and switched over to resin casting before they had the process completely worked out.  Consequently, they must be purchased with the caveat 'buyer beware.'  When purchasing a Finecast model make sure to open it in the store and inspect it before purchasing.  Even still, it is unlikely that all of the imperfections will be apparent until you sit down with the model and begin cleaning it up, so trips back to the store for a return may be necessary.

Here's a summary of what I consider to be the pro's and con's of Citadel Finecast miniatures:

I don't agree with resin being more "resilient to dropping" because of its light weight.

If you drop a metal or plastic model, it will at most break in two. A resin model is completely shattered on such situation, most of times beyond regluing.

The main advantages of resin would be lower price and lower shipping cost (due to lighter weight). But none of them are being granted by GW to their costumer base. And this is where they are increasing their profit margin from...

Hi Matgc: with respect to dropping, I think it depends largely on the model in question. The low density of resin results in a lower impact hit when it topples over on the table, with less chance of paint chipping. On the other hand, I've noticed that the resin is very fragile, and I could certainly imagine it shattering on a big drop. Fortunately, I haven't witnessed any catastrophic drops yet.

I do agree that it is a bit underhanded that GW isn't passing on the cost savings to their customers but, instead, seem to be pocketing the extra profits.

I havn't purchased any GW figs in years, but will be back in the market for them once GW starts releasing the new Hobbit Movie figures. Thanks for the review of the GW Finecast figures.

another thing about GWs blend of resin is that its quite flexible. while i would guess this would help with the shattering problem I'm sure you've had a metal model that's bent and had the paint flake right off. i find this happens way more frequently with the finecast.

I suspect that the low density of the resin will make it less likely for a paint-flaking bend to occur. I know I've ruined a lot of paint jobs by dropping models, or in some cases just having them tip over on the table.

That's strange about the bubbles. Bubbles (pitting) aren't caused by wear on the mold, they are caused by not degassing the resin well enough, either by vibrating or pressure pots. So it is mostly a lack of skill or equipment that causes bubbles.

Hi Bob, thanks for your comment. Whatever the reason for the pitting, it seems to be ubiquitous in the Finecast line. It hadn't occurred to me that miscasts were trash. Given the quality of the miniatures that they let go out, I'd hate to see the ones they throw away!

Reaper has assured us that, despite their recent polymer plastic 'Bones' line that they will be continuing to cast metal, for which I am glad. I just wish that GW had chosen to stick with metal, too.