Sometime last year members of Bugman's Brewhouse, a forum community of fellow Warhammer dwarf players decided to pool their resources and commission a commemorative dwarf miniature for the community.  Concept art was drawn, a sculptor, John Pickford, was contracted and around two hundred miniatures were cast for those members who were part of the project.  Mine arrived in the mail the other day and I was very pleased to find that the finished product exceeded my expectations.  The concept art and pictures of the green really didn't do this guy justice.

The miniature was intended as a dwarf king, but since I already have a king for my army, I decided to make him my army battle standard bearer.  Such a fine and unique miniature deserves a name, and I've decided to call him Goldgrim Auricson in recognition of his impressive gilded armour.  Now that I have him painted I wanted to post a few pictures and show him off. 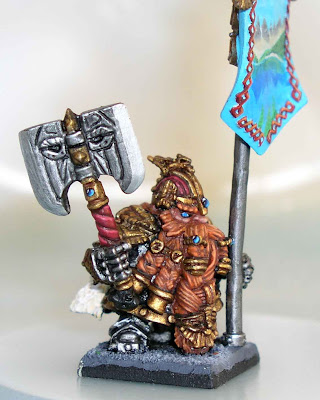 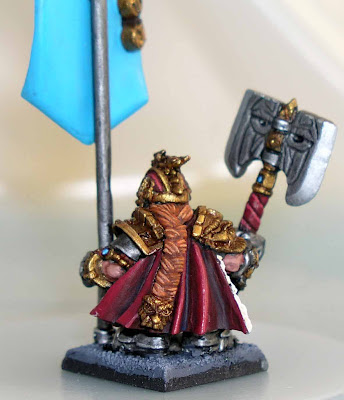 I'm sure that most Canadians will recognize the scene painted on the banner as the view of The Valley of the the Ten Peaks from Moraine Lake in Banff National Park in Alberta.

The photographs really don't do him justice, though, and fail to adequately convey the amount of detail in the sculpt.  This is, by far, the nicest dwarf in my collection and I can't wait for him to take his place in the line of battle and march forth to cleave my enemies and settle my grudges.
Posted by Sean Robson at 11:18 AM

Nice _signifier_ you've got there. The dwarves go all out on their banner paintings. :)

That dwarf is excellent. If you don't mind me asking, how much did it cost you guys to get it sculpted and produced, and how many did you produce?

While I don't plan on getting any minis created, it's something I often daydream about.

Hi Matt, it was a fairly small casting run; somewhere between 100 and 200 figures, I think. The total cost, including shipping from the UK was about $15 CDN and enough profit was made on the venture for the community to fund another green.

I don't recall, offhand, what the specific sculpting, mould, and casting fees were, though. Prohibitive for a single individual, but manageable if a group of people chip in.

Just goes to show how much profit GW makes off its miniatures though, doesn't it?

Thanks very much, Matt! This guy was a lot of fun to paint.