I'm not a big fan of demi-humans in my fantasy campaigns.  They just don't seem to mesh well with the sword & sorcery genre I like to emulate.  When you've had a tough day slaying a power-mad wizard before he could loose a primordial horror upon the world, and all you want is some alone time with the naked wench you're toting around on your shoulder, the last thing you need is some effete elf lamenting the decline of his race.  Likewise, it's tough to tread the jeweled thrones of the Earth under your sandaled feet when you got some yappy hobbit following you around whining about second-breakfast.

I've come to understand why Gary Gygax emphasized the humanocentric nature of D&D and why he imposed limitations on demihumans to discourage their proliferation throughout the milieu.  3rd edition players: raise your hands if you've ever had to put up with an elven rogue who was played solely for the power-gamey benefits that arose from that particular class/race combination.

Despite this, I have a fondness in my heart for dwarfs.  What's not to love about a bunch of dour-handed, grudge-bearing, treasure-hoarders with an inordinate passion for ale?  I find myself identifying with them more and more as I get older.

I feel that the iconic beer stein is as necessary to a dwarf as his beard or axe, and I love finding miniatures to match.  Here's a dwarf cleric from Reaper: 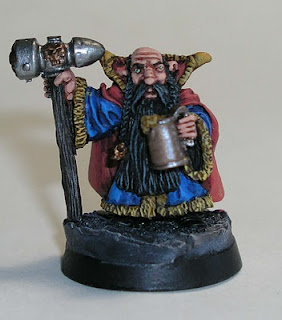 I call him the dwarven Dr. Strange after my inspiration for his colour-scheme.

Another favourite of mine is Josef Bugman, Dwarf Master Brewer of the Warhammer world: 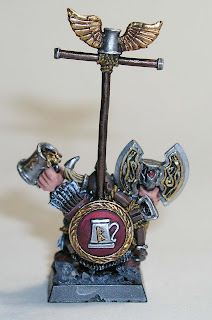 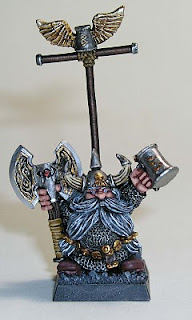 I love that even his standard and shield both bear the image of a beer-stein.

I am about to start a new dwarf army for Warhammer Fantasy and just this afternoon picked up a dwarf battallion box to get me started (which is why I am rhapsodizing about dwarfs today).

One of the coolest units in a Warhammer dwarf army are Longbeards - hoary old veterans, literally grognards, who constantly grumble about how today's goblins are smaller and weedier than they used to be and how nothing is made as well as it was in their day.  They benefit from a special rule called Old Grumblers, which allows dwarf units within 6" of a longbeard unit to re-roll failed panic tests to avoid the withering glares of their elders.  I think a lot of old-school gamers can identify strongly with the Longbeards.

Despite my general dislike of humanoid races (aside from a minor dwarf fetish) I do allow them in my campaign.  It would be strange to disallow elves in a campaign heavily influenced by Celtic mythology, but I've envisioned the elves of my world to be more like Moorcock's Melniboneans: decadent, often cruel, masters of dark sorcery.

In retrospect, I do wish I hadn't set halflings loose upon the world, though.  I'm not sure Tolkien's creations fit well into a world that tries to explain real-world mythology.  I have modified them so that they are less the jolly gluttons of Middle Earth and more the dark fae of myth.  Halfling clans travel the rivers and coastlines of Faedun in their shallow-draught kin-ships, going from town to town entertaining, telling fortunes, and selling illicit goods.  They are analogous to floating carnivals, but of the sort described by Ray Bradbury in Something Wicked This Way Comes.  Thus, they are even more sinister than the halfling guild-thieves depicted in J.D. Webster's classic Finieous Fingers cartoons.

But, I see that the dwarfs have gotten into the ale-barrel again, and I hate spitting out beard-hair.  So until next time, as the dwarfs of Faedun say: May your flagons be never empty and your bladders never full!
Posted by Sean Robson at 5:19 PM