The "evolution" of Dungeons & Dragons

In much the same way that police, physicians, and lawyers must wince at the way their professions are portrayed on television dramas, I get rankled every time I see evolutionary metaphor applied incorrectly and inappropriately to support various positions.

One of the most common misconceptions, and the one most commonly applied to the "evolution" of Dungeons & Dragons, is that evolution proceeds in a linear progression from "primitive" to "advanced," and is most often used to imply the de facto superiority of the WotC's current fantasy roleplaying game, which shall be referred to herein as 4E, over earlier versions of D&D.  You will note that I do not refer to 4E as Dungeons and Dragons, or the 4th edition thereof, as I do not consider it to belong to the the D&D lineage, but rather a separate, unrelated game of independent origin as I shall explain later.

One of the biggest contributors to widespread misunderstanding of evolution is this famous icon, The March of Progress:

This image, which nearly everyone has seen at some point depicts hominid evolution as progressing in a linear fashion down the road to perfection - namely us.  In reality there have been a number of human lineages that branched off, at various junctures, from the line leading to Homo sapiens.  We see ourselves as the pre-determined end point of human evolution only because we are looking back as the only surviving human species.  We could just as easily now be sharing the planet with other human species, or have been supplanted by one or more of them.  Thus, it is wrong to assume that evolution progresses toward some destined ideal.

Another common misconception is that evolution involves one species "turning into" another.  This is incorrect and a parent-species usually coexists with, and often outlives, its daughter-species.  The analogy that I usually employ when lecturing about evolution is to compare an evolutionary clade (a group of related species that share a common ancestor) to a family.  Think of yourself as a parent-species.  You are born (speciate), live your life and, eventually, die (go extinct).  You may at some point have one or more children, which we will refer to as daughter-species.  You do not turn into your child, you remain a separate and unique individual throughout your entire life, and you might outlive your daughter-species or they might all live long enough to give rise to daughter species of their own.  Thus you may well give rise to many different lineages (the families of each of your children) branching out from a common ancestor.  Using this analogy it is easy to see that evolution is not a linear, progressive process with an older, primitive species morphing into a new, advanced one.

The familiarity of the March of Progress icon and its implied linear progress towards an ideal end-point is so well-entrenched our psyches that it has become an oft-used advertising tool.  Here is one of my favourites, and in this case I find it difficult to disagree:

This brings me to another common, though incorrect, icon of evolution - the tree of life: 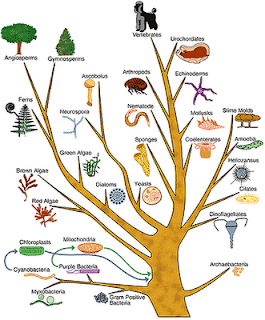 Although the 'tree of life' icon recognizes the branching nature of lineages it depicts a cone of increasing diversity progressing to more, and by implication, 'better' taxa.  Note that, in an example of humanistic bias, vertebrates occupy the highest branch in the example above, despite that fact that many other groups such as arthropods and molluscs have far greater species diversity and longevity and are, by all accounts, more successful taxa.  A better graphic depiction of evolutionary diversity would be a shrub, not a tree; or as I like to refer to it in lectures, the tumbleweed of life.  I like the imagery of a tumbleweed, with branches radiating out in all directions from a common ancestor, without a hint of directional trend or implied superiority.

The tumbleweed is also a very good analogy for the explosive radiation of D&D in the 1970's.  The original three 'little brown books' were, as most serious roleplayers know, adapted from the fantasy supplement for the medieval miniatures wargame, Chainmail.  They consisted of a very loose set of rules for "fantastic medieval wargames campaigns playable with paper, pencil and miniature figures."  The rules were vague and often subject to various interpretations.  The result was that pretty much every gaming group at this time had its own interpretation of how to play the game and developed their own house rules to fill in the blanks.  In nature, speciation often occurs when genetic change accumulates in different populations of a species due to geographic isolation.  Likewise, without the benefit of the internet to disperse ideas throughout the worldwide gaming community, individual gaming groups were largely isolated from other groups outside their geographical area.  Thus their games continued to accrue changes, effectively speciating via 'descent with modification' from a single common ancestor.  Though some of the branches radiating from the stem were published as their own games, such as The Arduin Grimoire, most were stubby little twigs of home games that failed to proliferate.

By far the most successful and prolific branch to stem from the 1974 D&D rule system is what I refer to as the 'TSR clade,' which quickly began to accumulate genetic change by way of five additional rules supplements.  Two separate lineages diverged from Dungeons and Dragons in 1977: the Advanced Dungeons and Dragons lineage, and the 'Basic Set' lineage.  AD&D, itself, speciated producing AD&D 2nd Edition in 1989.  The Basic Set lineage consisted of the 1977 Holmes edition, the 1981 Moldvay edition, and the 1983 Mentzer edition, which was compiled as the D&D Rules Cyclopedia in 1991. This is a good analogue for natural speciation, as  Dungeons and Dragons did not transmogrify into AD&D; it remained in print, alongside its two daughter-species, AD&D and Basic D&D, for several years.

In 2000, Wizard's of the Coast released Dungeons and Dragons 3rd edition, which then gave rise to 4E in 2008.  I consider this WotC Clade to be polyphyletic (unrelated) to the TSR Clade.  Both 3E and, even more so, 4E differ so completely both mechanically and philosophically from the lineages in the TSR Clade that there is little or no evidence of descent with modification from a common ancestor.  It is true that 3E retained Vancian magic (subsequently eliminated in 4E) and borrowed a few of the optional rules (such as Attacks of Opportunity) from AD&D 2nd Edition, but then again many unrelated games have borrowed from D&D.

The games of the WotC Clade retain the name Dungeons and Dragons because WotC owns the rights to the name and are primarily concerned with capitalizing on its brand recognition, not perpetuating the lineage that started with the rules written by Gary Gygax and Dave Arneson in 1974.  Because WotC owns the legal rights to the name they could make a game about anthropomorphized honey-bees and their adventures in pollination and call it D&D if they wanted to, but that doesn't make it so.

I don't mean this as a criticism of WotC or its games, nor do I intend to imply that they are necessarily bad games.  There are lots of great games that are not Dungeons and Dragons and 4E is among the most recent of them.  I do feel that it is disingenuous of WotC to label and market 4E as D&D, regardless of their legal right to do so.  Over the decades the name D&D has become associated with a particular style of game, and there are certain expectations and assumptions associated it, just as there are with Traveller, GURPS, Runequest, or any other popular and venerable roleplaying game.  4E does not meet those expectations.  Those who suggest, as many have, that 4E represents the "evolution" of D&D merely demonstrate that they weren't paying attention in biology class.
Posted by Sean Robson at 6:04 PM

"You will note that I do not refer to 4E as Dungeons and Dragons, or the 4th edition thereof, as I do not consider it to belong to the the D&D lineage, but rather a separate, unrelated game of independent origin..."

I couldn't agree more! Also, great use of the Guinness pic, which I find most appropriate, and one which makes me thirsty at the same time!

Thank you for writing this.

The equations of (1) the passage of time with progress, (2) change with progress, and (3) evolution with progress - especially when those equations are made both unconsciously and arrogantly, as is so often the case - demonstrates how widespread scientific illiteracy is among people who think of themselves as educated and advanced specimens of humanity.

Having observed the development of third edition reasonably closely, I can confirm that it was the result of a conscious redesign, not just evolutionary speciation. However, it was a redesign done by long-term D&D fans with the intent of actually being a new version of D&D. Many of the changes involved the incorporation of D&D or AD&D house rules - I even had a house rule of mine incorporated into third edition.

Whether the designers of third edition succeeded in creating a version of D&D or whether they created a related game whose fundamentals changed too much for it to be a genuine daughter species is certainly open to debate. After all, redesign and evolution are very different processes, which is why redesigns so often unintentionally break design lineages.

Good reminder of the accurate usage of a much misused concept.

I don't wince every time I see a physician turn on the TV, but since 3rd year of medical school, i generally change the channel. ;)

Blogger P. S. Mangus said...
"I couldn't agree more! Also, great use of the Guinness pic, which I find most appropriate, and one which makes me thirsty at the same time!"

Thanks! Guinness always has great ads, and this is one of my favourites.

I agree, and I wrestled with this very thought myself: whether to include 4E as a descendent of 3E or of completely independent origin. In the end it was a judgement call based solely on the similar skill lists and feats, but I could easily have gone the other way, too.
Thanks for your insightful comments.

Yep, taxonomy is highly subjective and always involves a lot of judgement-calls. In the end taxonomic classification artificially imposes structure on nature for our own convenience and isn't always perfectly accurate.
Thanks for your thoughts