The enigmatic Burgess Shale animal, Nectocaris is the featured 'weird wonder' for this week, chosen for its recent spot in the limelight in science news the past couple of weeks.  Since its first description, in 1976, Nectocaris has defied categorization, largely because it was, at the time, known from only a single specimen, shown above.  However ongoing fieldwork at the Burgess Shale over the past three decades unearthed a further 91 specimens, which have been the subject of a recent study, published in the May 27 issue of Nature, that suggests that Nectocaris may be the early ancestor of cephalopods. 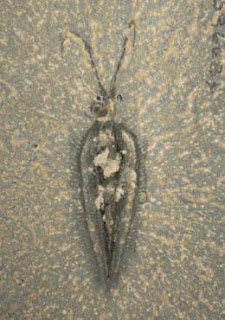 The new specimens, which measure between 2 to 5 cm long, reveal greater details about the animal.  It is kite-shaped and flattened from top to bottom, with large, stalked eyes and a pair of grasping tentacles, presumably used to capture prey.  It may have swum using lateral fins, like modern cephalopods, and may also have used its nozzle-like funnel for jet propulsion, like a squid.  Unlike the nautiloid cephalopods of the Ordovician period, Nectocaris does not have any mineralized tissues, so they are very rare as fossils.

This finding extends the fossil record of cephalopods by 30 million years.  Given that cephalopods are startlingly intelligent for invertebrates and have very complex eye structures, for them to have evolved by the Middle Cambrian puts a new meaning to the term 'Cambrian Explosion.' 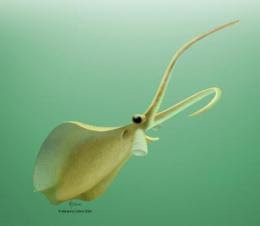