To Flee, Or Not To Flee?

Having decided to promote and encourage the employment of hirelings in my campaign, it is inevitable at some point they are going to get scared and run away.  The question is, at what point?
When it comes to monster morale I usually just decide when it makes sense for them to turn tail and run, or surrender - at least when I remember to; sadly I often get caught up in the action and forget to consider things like morale, so my monsters often fight to the death more often than they ought to.  But I'd prefer not to arbitrarily screw my players over by having their hirelings run away based on my own whims, so I'm going to need a morale mechanic for Swords & Wizardry.
Now, Labyrinth Lord has a nice morale mechanic and it is tempting to just swipe that to use in my S&W games, but I prefer a unified system mechanic, which in my case is rolling under an attribute score on a d20.  The obvious solution is to make a Charisma check to determine whether NPCs break and run when things get tough.  Of course monsters and most NPCs don't have attribute scores, nor am I inclined to bother generating them, so let's set their default morale rating at 10.  This will give them a 50% chance of holding tight when all Hell breaks loose, and their morale rating can be adjusted by their controlling character's loyalty modifier based on his Charisma score.  So a character with a Charisma score of 14 can, according to the S&W rules have up to 5 hirelings and has a loyalty modifier of +1, so in this case, the hirelings will have base morale rating of 11.  This can be further adjusted with situational modifiers.
Monsters, too, will now have a default morale rating of 10, though exceptionally craven species might have a lower rating and unusually disciplined monsters will have a higher rating.  And, just like hirelings, monsters can have their morale ratings adjusted by the loyalty modifiers based on the Charisma of bosses.
While I'm all in favour of DM adjudication, I often prefer to let the dice dictate the course of events for me, especially when the mechanic is quick and simple and can be done on the fly. 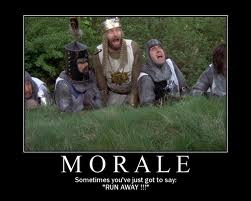 I like your solution, though i'd be tempted to go with 2d6, with a 7 or more being a pass, and using the charisma modifier to improve the roll. That way, the +1 charisma bonus is more powerful, while higher charisma bonuses don't provide a linear improvement in morale success.

(stolen from LOTR:SBG, which uses a 2d6 morale mechanic)

In Labyrinth Lord you roll under the morale rating on 2d6, which, coincidentally is how it works in Warhammer as well. But I've got a real fetish for unified mechanics :)

You could make it so that the hirelings test on their employers charisma, including any possible modifiers for poor treatment and such.
This shows their trust and faith in their employer, and his ability to inspire his troops.