I was recently chatting with my sister-in-law, whose two oldest boys were in hockey camp.  The oldest of the two (13 years old) had team try-outs later that week and if he made the team it would cost $2000.00 in fees.  I almost choked on my coffee.  Two grand for a 13-year-old to play hockey?  For one season?  This didn't include the cost of equipment which, at that age, would need to be replaced annually given how fast adolescent boys grow, fund-raising bingos that would need to be worked, or the countless hours chauffeuring the kids to and from games and practices.  This is was completely outside my experience of playing hockey as a kid.

Like most Canadian kids I grew up with a hockey stick in hand, but back then they were made of wood and inexpensive.  I played on the street with a foam puck and my goal posts were blocks of ice that needed to be replaced every five or ten minutes after a car drove over one of them.  And I certainly didn't need to 'try out' to be on any team, I just grabbed my stick and went outside; there was almost always a pick-up game going on that needed another player.  Consequently, I didn't play once or twice a week, I played pretty much every day all winter long.  Of course everyone took their sticks to school and we played on the rink at recesses and lunch hour, too.  The best thing about such 'disorganized sport' was that no one really cared how good you were and you never got screamed at for missing a shot or letting one through.  Hell, half the time we didn't even keep score - we were playing for fun.

The same went in the summer, when I played softball every day.  Again, I wasn't part of any team - I'd just grab my glove and head to the playground.  There was always a group of my friends waiting for enough kids to show up to get a game going.  In autumn, the game de jour switched to touch football or, to be more accurate in our case, bone-jarring-shove football, which frequently escalated into full-body-slam football.

What these three games had in common was a very loose adherence to the rules.  Due to the vagaries of environment and players we had to modify the games and make up rules to make them work.  Our touch football games were especially heavily house-ruled, and were a bizarre fusion of Canadian and American rules plus our own made up stuff.  It was a bit like Calvin-ball. 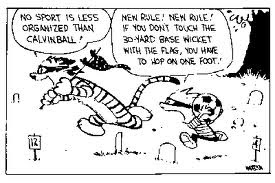 House rules were an intrinsic part of all of our seasonal pick-up games and I doubt very much that the way our group played any given sport was even remotely similar to the way another group might play it.  Kind of like D&D back in the early days.

It's a popular pastime among the old-school community to debate when, exactly, D&D 'went wrong,' with the finger of blame commonly pointed at Dragon Lance.  But I wonder if there aren't broader cultural issues at play.  Have we, as a society, profoundly changed the way that we play over the last couple of decades?

Old school D&D was all about free-form 'sandbox' play and a do-it-yourself mentality, but really, isn't that the way we played everything back then?  I played a lot of boardgames as a child, such as Monopoly, Payday, Clue, Life, etc. and my friends and I invariably made up our own rules for these games as well - we always had more fun that way.  Given the unstructured way that we played everything then, is it any wonder that we would approach D&D any differently?

I don't see kids playing pick-up games anymore.  Halfway through writing this post I paused to take my daughter, Elena, to the playground across the street from our house; it is a beautiful evening and a perfect night to toss a football around.  When I was a kid that park would have been packed on a night like this and every kid in the neighborhood would be out after supper, trying to milk the juice out of every last minute of summer.  But the park was deserted, as it always is.  Never once, in the seven years that I have lived here have I seen a single pick-up game of anything played in the park or on the streets.  No one does it anymore - at least not around here.  Kids today only seem to play organized sports.  Likewise, I doubt Monopoly et al is as popular with today's kids as it was with my generation.  Today, it seems, kids play their games on computers or consoles.

What's the common thread here?  Structure.  We have a generation of kids playing games and sports that are structured and have intractable rules and methods of play.  They couldn't change them if they wanted to, but I'm not sure if it would even occur to anyone to make up their own rules anymore - it simply isn't part of contemporary culture.  Maybe this is why we are seeing rules-heavy role playing games, like 4E, that take the GM out of the equation by limiting his creative control and ability to adjudicate play.  Maybe today's rpgs are simply a reflection of the way that today's gamers have grown up playing, just as old-school rpgs reflect the way people played back then.  I think this might also explain why so many of us in the old-school community find 'new-school' rpgs and their philosophies so objectionable - they are completely contrary to all of our past experiences - inimical to our very concept of 'play.'

I fear that playing in such structured environments may be irrevocably damaging the imagination and creativity of today's children, and it saddens me to walk through the park and not see anyone playing in it.  On an encouraging note, however, my daughter's current favourite game is 'reverse snakes and ladders,' which is her own house-ruled version in which we start at the top of the board, go up snakes and down ladders.  It isn't a huge divergence, but she's only four years old, and it's a start.
Posted by Sean Robson at 6:50 PM

I also remember being able to head out to the park where I grew up and find, more often than not, a pick up game of something.
However, it may be where we live that effects this as I noticed that this still happens, to some degree, is the small town where I grew up.
Of course, there is no mall to hang out in, and the internet is pretty slow.

I think this is a dead-on observation. It amazes me to see just how differently kids are treated today compared to when I was a kid. I realize our world has changed, but has it really changed as much as parents want to believe? I see this as a lack of trust. Not only with the world at large, but also with the kids themselves. It wasn't this way when I was young.

When I was in first grade I walked about a mile down our road to to meet the school bus. I was five years old. How many five year olds do that now? We didn't have a choice, because my mom was a single parent and had to work. I do not know any kids that age even taking the bus, let alone walking alone to the bus stop. In the evening I would walk home from the bus stop and it would be half an hour to an hour before my mom got home. Needless to say, I was raised self sufficient.

Throughout my childhood my mom had to beg me to come in from playing outside. I remember spending weekends and summer breaks literally outside nonstop. It is rare that I see kids playing in the neighborhood now. Which I find sad and pathetic... We were constantly playing some kind of pick-up game. Basketball, flag football, two-hand touch football, spotlight, hide and seek, kick the can -- my god the list is endless. I grew up playing baseball. I started in pee-wee and played through high school. Sports were not a money making venture back then. I can recall one of my coaches having to pay for our jerseys one year because our fund raising efforts did not generate enough money.

Obviously, I am babbling now. You hit a nerve with this topic. This is something I have been ranting about in my personal life. I am not sure when things changed for the worst. Kids just do not seem to care about the same things we did. Most do not read unless made to read. They do not need to have an imagination when computers and video games do all the imagining for them...

I will stop now before I have a coronary!

This is a sore point for me too, Shane. Like you, I walked to school and spent every moment of daylight outside during the summer. I'd get up around dawn, and my parents wouldn't see me until supper, after which I'd be outside again.

Our children, in contrast, suffer from childhood obesity, early-onset diabetes, and attention deficit disorder. Well, they never go outside to play, so why is this a surprise to anyone?

For some reason, our generation lives in mortal fear of exposing our kids to the world. We seem to believe that it is too dangerous to let our kids out unsupervised, despite that fact that crime rates are actually lower than they were when we grew up. I blame the news media for this. Nowadays, every crappy thing that happens anywhere in the world is reported and given undue emphasis. Fear sells, and the news is no longer an information medium, but rather an entertainment medium for frightened voyeurs. Consequently people have a very skewed and distorted view of the world and imagine dangers lurking around every corner. Statistically, our kids are more likely to be abused, harmed, or molested by a friend or family member than a stranger, but we still won't kick them off the computer and punt them outside. Talk about killing them with kindness.

Great post. I couldn't agree more and it's a crying shame. I spent my formative years playing with Legos; inventing games; writing stories; building things out of boxes and other castoff "junk"... I don't see any of that anymore. Everything is organized, supervised and purchased at the local mega-mart.