The Changing Face of the Orc

There has been quite a bit of discussion of pig-faced orcs lately, due to Otherworld's orc miniatures and the recent announcement that Minifigs will be re-releasing their classic pig-faced ork miniatures.

I always harboured an intense dislike for the pig-faced orcs when I was young.  I refused to buy any of the Minifigs orcs on the grounds that they weren't proper orcs, by which I meant that they didn't conform to how Tolkien had described them, which is to say another word for goblin.  This was, admittedly, a pedantic viewpoint, but not entirely unjustified; the term orc as coined by Tolkien was a Westron derivation of the elvish words for goblin: uruk in the Quenyan tongue, and yrch in Sindaran.  I always considered orcs and goblins to be synoymous, just as Tolkien intended, and it somewhat offended my sensibilities to see them depicted, not as goblins, but as pig-men.

As far as I know, it was in volume 2 of D&D, Monsters and Treasure, that orcs were split from goblins for the first time.  Even here, the descriptions are vague and it could be that in OD&D orcs were intended to be a different breed of goblin, but they were listed as a separate monster and thus began the orc's transition to the generic evil cannon fodder of pop-culture fantasy.  Certainly by the time the Monster Manual was released orcs were definitely a separate race from goblins:

"As orcs will breed with anything, there are any number of unsavory mongrels with orcish blood, particularly orc-goblins, orc-hobgoblins, and orc-humans."

Where once orcs were universally known as a filthy and degenerate race, malicious, cruel and hateful, who were bred by Melkor in mockery of the elves, we now see many differing concepts of orcs in a variety of media, such as the noble warriors of World of Warcraft, the zany nihilists in Warhammer, and the nature-loving tree-huggers of Eberron.  There are even novels about orcs, such as First Blood by Stan Nicholls, which depicts orcs as the heroes; metaphors for the noble savage myth of the North American Indians, they are beset by the ravaging humans who rape the land of resources and sow destruction in their wake.  A pretty mediocre book, but an interesting example of how orcs have proliferated in the fantasy genre. 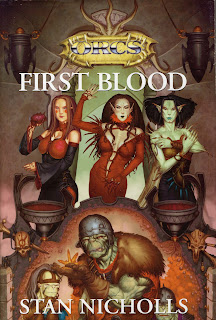 Of course, in D&D orcs are still the same foul, evil-wizard-serving  malcontents we've known and loved for years.  But it is interesting to see how greatly D&D has influenced mainstream fantasy that orcs have become the generic bad guy race throughout the genre.  I doubt that orcs would be so ubiquitous in popular media had they not been included as a monster in D&D.

Given my early dislike of pig-faced orcs it took me a while to find orcs that I thought looked sufficienty orcish.  The first of these were the miniatures from Grenadier's Orc's Lair boxed set for Advanced Dungeons and Dragons. 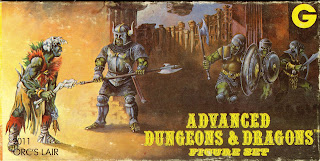 I bought this set in the spring of 1981 to use with module A1: Slave Pits of the Undercity, which I was about to run my friends through.  I was absolutely overjoyed that I'd finally found orc miniatures that resembled what I thought orcs should look like: 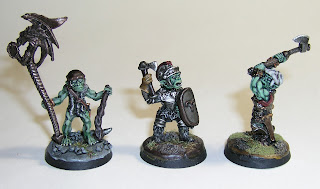 My views on orcs have softened over the years, and I've even been tempted by Otherworld Miniature's pig-faced orcs, at least as an aesthetically pleasing sculpt.  I still can't reconcile them as orcs, but I do rather like James Maliszewski' solution to use them as a race of boars that were magically given humanoid form.  In that context I can easily warm up to them.

Just to show how catholic my tolerance for non-Tolkien depictions of orcs has become, I've embraced the zaniness and recently begun collecting an Ork army for Warhammer 40K:

My 40K ork army is a band of pirates belonging to no clan; instead they roam the spaceways in their kill kruza's, led by the fearsome Kaptin Badruk, raiding, plundering, and hiring themselves out to larger warbands.


When it comes to D&D, though, my preference is not to use orcs at all.  I still can't shake the feeling that orcs are synonymous with goblins and since goblins already exist there should be no need for orcs.  Unfortunately my current campaign is set in a world that I first created about twenty five years ago and though it was intended to be a world of dark fairy tale and mythology, I included orcs without thinking it through.  I now feel obliged to retain them out of a sense of continuity, but I have defined their presence in the world in a way that reconciles them with the goblins that are the indigenous bad guys of Faeridor.  Orcs, like humans, are aliens from another dimension who entered this world through breaches in the dimensional boundaries.  Thus orcs are present only in small numbers and do not not exert significant influence upon the milieu.  They exist in small warbands who hire out as mercenaries to anyone who will pay them and allow them fight and plunder.
Posted by Sean Robson at 7:22 PM

I'm okay with pig-faced orcs, if only because they appeared in the Holmes bluebook.

I mused, about a year ago, that the pig-faced orcs of D&D came from House On The Borderland.

I like the goblin and orcs from the LOTR SBG game, and would probably use those in my D&D games.

first of all D&D IS NOT THE END ALL BE ALL OF ORCS. and DID NOT originate the ORC... we have JRR Tolkien to thank for that. he is the Grand daddy of the genre. put down the dice, and pick up a book.

You might want to actually read posts before commenting on them; it will save you a lot of embarrassment.