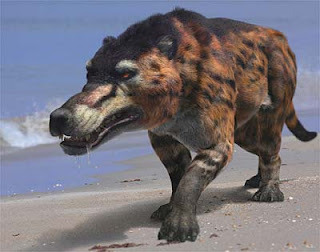 One of the largest predatory mammals ever to have walked the earth, Andrewsarchus mongoliensis, named for explorer Roy Chapman Andrews, lived during the Eocene Epoch of the early Tertiary Period 34-56 million years ago.

The species is known only from a single fossil skull discovered in the Gobi in 1923 by a member of the American Museum of Natural History's famous Central Asiatic Expedition.

Although its exact size is uncertain, it is estimated that the animal probably massed about 1,000 kg (~2,200 lbs) and probably would have made a pack of dire wolves look like a litter of puppies.  Obviously, because of the lack of fossil specimens, little is known about the palaeoecology of Andrewsarchus, and it is unknown whether it hunted singly or in packs or whether it subsisted entirely by predation or was a scavenger as well.  In my experience, however, like graduate students, few predators will pass up a free meal, and it is likely that Andrewsarchus scavenged when it could and hunted when it needed to.  Its large jaws supported powerful muscles and it could easily have crushed bone, and it has been suggested that it preyed mainly upon brontotheres - enormous mammals related to horses and rhinoceroses.

Andrewsarchus will remain largely a mystery until new fossil specimens are found to fill in the missing gaps in our knowledge, but until then reconstructions such as this will give us our best picture of what this enormous beast must have looked like - certainly not something I'd want to run into on a dark night. 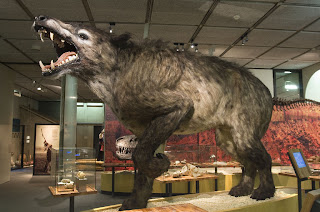 Naturally, anything that I wouldn't want to run into on a dark night is something that I definitely want to add to my campaign, because what adventurer worth his salt doesn't love running into dangerous things on dark nights?

Sarks roam the plains of Lemuria, hunting singly or in mated pairs.  They are vicious and difficult to manage, but they are sometimes captured and trained as mounts by savages of the Lemurian steppes.  The sark's bone crushing bite is so powerful that 3d6 are rolled for damage, and the lowest two scores discarded.
Posted by Sean Robson at 2:25 PM

I understand its closest modern relative is the goat. With pedigrees like that, you wonder what will be roaming the Earth one million years hence.

I hope there will be Gamma World style sentient mutant plants roaming the Earth by then!

I've always found the andrewsarchus an inspiring creature. Nice to see it statted up.