Since my last Mythos-painting post was in mid-July, I'm long overdue for another.  I didn't get much painting done over the summer due to the oppressive heat, and for most of autumn my painting time has been spent on my Warhammer Dwarf army and a batch of new Reaper minis for my City States of Lemuria campaign.  So my vow to finally paint all of my long-neglected Call of Cthulhu miniatures has been occupying the back seat for the last few months, but I did recently manage to get my Byakhee miniature painted. 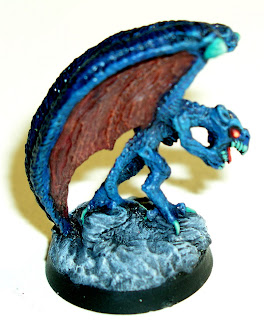 This was really a pretty quick and easy paint job.  Because there is a lot of surface texture on the miniature, I started out with a base coat of dark blue, then drybrushed several layers of successively lighter blue.  Likewise, the wing membranes were basecoated in dark red then drybrushed up to a final light layer of orange.  The claws and teeth were picked out with a light blue/grey mix, and for the eyes I used the same technique of blending red up through orange to yellow that I used on the Deep Ones eyes.  I finished the eyes off with a dot of pure white to give them a demonic burning look.

The base was sculpted with an epoxy modelling compound then drybrushed with several successively lighter layers of grey.

"... there flapped rhythmically a horde of tame, trained, hybrid winged things. ...They were not altogether crows, nor moles, nor buzzards, nor ants, nor decomposed human beings, but something I cannot and must not recall." - from The Festival by H.P. Lovecraft.

Byakhee are an interstellar race often found in the service of Hastur the Unspeakable.  They are capable of flying through interstellar space and of carrying a rider, if that rider is suitably protected from the cold and airless vacuum of space.  They have no earthly bases, but can be summoned by sorcerers to serve as mounts.

Byhakhees may attack with both claws or a bite.  If they successfully bite a foe they attach and drain its blood, automatically dealing 1d6 points of damage on each successive round unless the creature can be dislodged or killed.
Posted by Sean Robson at 8:52 AM

Nice paint job, though I'm nopt crazy about the sculpt. It makes the byakhee look a bit vanilla dragonish.

Nice work. I agree with Trey, the mini leaves much to be desired, but you did a great job making it look much better.

Thanks, guys. You're right, Trey, it is very vanilla. Few of the Grenadier miniatures evoke the sense of dread and loathing that they should, and many of them look chunky and lacking detail; as do many of their AD&D miniatures. They did knock a few out of the ball-park, though, like Tsathoggua and Nyarlathotep (which I have yet to paint)