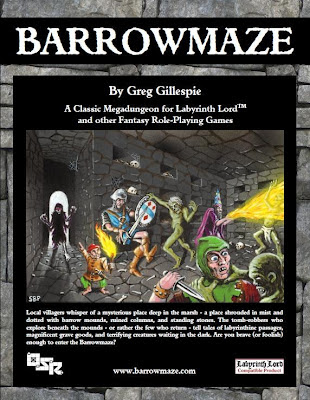 For most of my professional life I've been a beneficiary of serendipitous discoveries.  Indeed, I consider the simple expedient of happy coincidence to be one of the driving forces in the history of science, and often refer to serendipity as the 'handmaiden of discovery.'

My gaming life has also recently benefited from a fortuitous and timely discovery.  Variable attendance at my game sessions has recently required that I shift my campaign away from the ongoing exploration of the ruined city of Thrace, deep within the Jungle of Zahar, to an urban environment.  My plan is to run urban adventures when few players attend, with an ongoing exploration of the subterranean burial chambers that lie beneath the city's necropolis when attendance allows.  My problem is that this shift happened quite suddenly, and I found myself without the time to properly plan out the ancient funereal complex beneath the necropolis of Catapesh, before my next session on Sunday night.

Then, along came Greg Gillespie's new adventure, Barrowmaze - a megadungeon beneath an ancient field of barrow mounds.  What are the odds that an adventure ideally-suited to my needs would appear just when I need it?

So, I've downloaded and printed it, and have given it a quick look-over, and I thought I'd share my preliminary take on the adventure.  A more in-depth discourse will follow in the forthcoming session reports.

The basic premise of the adventure is that the PCs are tomb-robbers, looting an ancient interconnected system of underground tombs that lie beneath the burial mounds in a great moor near the town of Helix.  Picture Fafhrd and the Gray Mouser, rather than Frodo, Sam, Merry, and Pippin, traveling through the Barrow Downs in Lord of the Rings, and you'll have a good idea of what this adventure is all about.

Now, when it comes to published adventures, I am a very difficult customer to please, and I've criticized, at length, the many shortcomings of contemporary adventure publishers in How Not to Write an Adventure.  Let's see how Barrowmaze holds up as a useful game aid.

1. Font.  I run my games in my basement and adventures that are written in fancy fonts that are too small to read in dim lighting get tossed in the bin without ever gracing the game table.  Greg has chosen a sans serif font that is both reminiscent of old-school adventures and is easy on the eyes, and the text is large enough to read comfortably.  First hurdle cleared.

2. Keyed areas.  I believe that adventures with insipid read-aloud text should be consigned to the pits of hell.  I also absolutely loath authors who unfold the plot of their adventure in keyed areas as if they are mini chapters in an epic novel.  Adventures are game aids, not novels and, fortunately, you'll find none of this crap in Barrowmaze.  The keyed areas are free of read-aloud text and are very brief, containing only the information that you need, like what lurks in the room and how much treasure it has.  This means that you don't need to spend hours studying the adventure before you can run it.  You can sit down with Barrowmaze and run it after about a ten-minute look over.  Second hurdle cleared.

3. Maps.  Adventures with maps scattered throughout the text drive me absolutely bug-shit crazy.  If an adventure-writer's goal is to provoke me into a homicidal rage, then by all means make me hunt for the maps then force me to flip back and forth between them and the keyed areas.  The three maps in Barrowmaze are located at the end of the adventure and are intended to be cut out and taped together to make one big map that I can have in front of me at all times.  Just like I want it.  And, they're blue the way Gygax meant them to be.  Since I only have a black-and-white laser printer I don't benefit from the blue maps, but I do appreciate the old-school aesthetic.  My only real complaint with the maps is that the font chosen for the numbers in the keyed areas looks like an L.E.D. and I find it hard to read.  The maps are also small and cramped, though I understand why: Barrowmaze is a very large dungeon and the maps were undoubtedly kept small so that they can fit onto three pages.  Nonetheless, I like to make notes on my maps to remind myself of things, and there is no room to do so on these.  I would have preferred larger scale maps, even if it meant increasing the number of map pages.

4. Bonus goodies.  In addition to the adventure itself, Greg has included lots of fun and useful extras, including:


Altogether, this is a whole lot stuff for $6.66 and, most unusually, contains none of the usual hallmarks of badly executed adventures that piss me off and have turned me against published adventures.  Paizo should take note.

Barrowmaze is the dungeon I wish I had written, and I can't offer any higher praise than that.

I couldn't agree more. And I had the same difficulty with the numbers on the map. I didn't notice until I printed them out.

I pretty much agree; it is a great module. I wouldn't actually call it a megadungeon though; more like a huge dungeon. It's a little too focused to be considered a megadungeon, which to me is a sprawling mess of inconsistency and multiple possible plot lines. Just my opinion.

As for presentation, the only issue I have is the inclusion of full 2 page character sheets for the pregens. Just seems a waste of page count to me. I'll just ignore them if i print it.

I didn't print them out, either; that's the nice thing about PDF adventures, you can ignore what you don't want. On the other hand, the pregenerated character sheets are for hirelings, which are way more useful than pregen player characters typical of old TSR tournament modules. Did anyone outside of GenCon ever use them?