Having recently written a post regarding minotaurs, medusae, and gorgons in D&D, I thought I'd share gorgons as they appear in Lemuria.  These are inspired by C.L. Moore's story, Shambleau.


Gorgons look like normal women in every way except for a mane of writhing crimson tentacles in place of hair, which they conceal by wearing deep hooded cloaks when they venture into civilized regions.  The dearth of reliable information regarding the nature and habits of gorgons has fomented many rumours and folk-tales, most prevalent of which is the notion that a gorgon's gaze will turn the viewer to stone.

Like many folk-tales this one has some basis in truth, but is greatly exaggerated.  In fact, the gorgon's tentacles are used to subdue mates for coitus by latching onto the victim/mate with a lamprey-like mouth and injecting a mild neurotoxin that renders him incapable of voluntary movement.  The victim's sensory and involuntary muscular functions are unaffected; he remains aware, he breathes, his heart still beats, and his ability to participate in sexual congress, however passively, remains unimpaired.  Upon completion of intercourse, the tentacles then exsanguinate the gorgon's lover, storing his blood to nourish the gestating embryo. 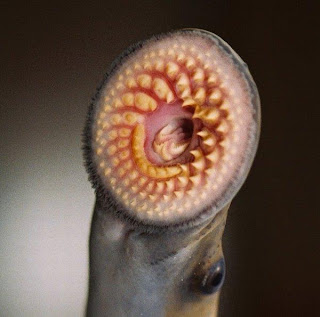 On occasions when a gorgon engages in intercourse for pleasure rather than reproduction, post-coital exsagnuination is not strictly necessary, and if the gorgon has developed feelings for her partner she will sometimes, unadvisably, let him live. The legend of the gorgon's petrifying gaze likely stems from the accounts of paralyzed lovers who lived to tell their tale.

Because no one has ever reported the existence of a male gorgon, Brother Mendelius, a scholar at the Temple of Thoth in Catapesh, has postulated that gorgons are a human offshoot whose ova can only be fertilized by x-chromosome spermatozoa, thus guaranteeing that gorgons give birth only to daughters.  He has also suggested that gorgonism is a dominant trait since no human woman has ever acknowledged being born to a gorgon mother.  These hypotheses are highly speculative, however, and are based on Mendelius' questionable transliteration of an ancient Atlantean codex on genetic science.  Other explanations exist for the lack of male gorgons or non-gorgon offspring, such as the possibility that these undesirable babies are consumed by the mother's tentacles immediately after birth.

Regardless, it appears that gorgons are highly selective when choosing mates, and pick only the strongest, smartest, and most attractive males to father their offspring.  Consequently, gorgons are exceptional in their physical prowess, intelligence, and beauty - discounting, of course, the mass of squirming red tentacles on their heads.


The bite of a gorgon's tentacles do no damage, but inject a neurotoxin that afflicts the victim with total paralyisis for 1d4 turns.  Saves against the toxin are made at -4 due to the large number of simultaneous bites that are invariably inflicted.

Paralyzed victims have no defense against lethal exsanguination, but this normally only occurs after copulation.

Gorgon neurotoxin is a valued commodity sought by both assassins and surgeons, and will fetch a price of 10 gp per dose.  Each tentacle contains one dose of neurotoxin in its venom-sac, and an average gorgon will have 10-100 tentacles that can be harvested.  It is for this reason more than any other that gorgons take extreme care to disguise their nature and leave no living witness to their presence.
Posted by Sean Robson at 3:31 PM

Really cool Gorgon! What is this Lemuria setting you're working on? Is this for Barbarians of Lemuria?

Thanks! The City States of Lemuria, is a pulp sword & sorcery campaign that I'm currently running and I've been developing it through a series of posts and session reports beginning in September, 2011.

The creature stats in the Lemurian Bestiary posts are broadly compatible with any old-school D&D or retroclone system, particularly Swords & Wizardy, but I use my own game system, Jeweled Thrones and Sandaled Feet, a highly modified Sword & Sorcery variant of S&W, to run my games.

Very cool, Sean. An inspired update on the gorgon.

Thanks, Trey, they kind of creep me out. Shambleau is my favourite Northwest Smith story, so it heavily influenced my perception of the gorgon.

And I can totally see them in a modern context. They'd make great Urban Fantasy beasties.

Great idea, Justin. They would work really well in a modern urban setting.

How do they know about chromosomes but still walk around with swords?

Atlanteans were highly advanced, and didn't walk around with swords.