Out of the Dungeon

After many years of running fantasy campaigns, I'm suffering from dungeon burn-out.  I just can't muster the enthusiasm that I need to run a good campaign, so I've decided to put my fantasy campaign on hiatus, shift gears and trade in the swords and armour for Tommy Guns and Elder Signs. 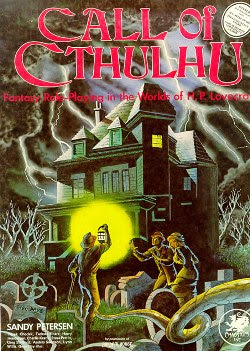 So I dusted off my old Call of Cthulhu boxed set and tried running a session of Lovecraftian horror for the first time in nearly thirty years.  I bought this game, on the advice of the game store owner, sometime in 1983 or 1984, and it was my introduction to the works of H.P. Lovecraft.  To say that it captured my imagination would be a gross understatement.  I spent countless hours reading and rereading the rule book and supplements, marveling at the mythos creatures, the sinister spells, and the tomes of forbidden lore.  It is fair to say that Call of Cthulhu has influenced every roleplaying campaign I've run since but, ironically, I've only ever actually run one or two sessions of Call of Cthulhu, back when I first bought it.

It's not always easy to find a group of players willing to give Call of Cthulhu a shot.  Let's face it, the game can be a tough sell to a lot of gamers.  Many of us engage in the hobby for the sense of wish-fulfillment it gives us: finding treasure, leveling up, and actually killing monsters.  It's a much smaller subset of gamers who get off on being messily torn apart, or going mad, whose only pay-off for successful play is living just long enough to uncover the next layer of the conspiracy.

Yet, there are enough such players to have kept Call of Cthulhu alive and well, and essentially unchanged, for more than three decades, which is an impressive accomplishment in the gaming industry - a testament to the lure of Lovecraft's mythos.

It was a challenge to run a good session, though.  Horror is hard enough to write, let alone to play.  In addition to the game master's normal duties of adjudicating player actions, keeping track of NPCs and running combats, you must also set the tone of the adventure, control the pacing, and provide enough clues for players to unravel the mystery.  That's quite a lot to manage and my old, long-vanquished stage fright made an unwelcome encore.

There are just so many things that can spoil a CoC session, and having uncooperative players practically guarantees failure.  Goofing around at the wrong time can spoil the mood, and rebelling against genre conventions, instead of embracing them, can ruin the game for everyone.  Horror genre gaming requires a lot more cooperation and collaboration between the players and GM than in many other types of gaming, especially a typical fantasy dungeon adventure, where part of the challenge and the fun is the almost adversarial stance of beating the GM's dungeon.  CoC requires a whole different outlook and style of play and it can be delicate juggling act, but I was fortunate in having a group of players who were willing to play along, buy into the premise, and work to make the session a success.

Consequently, the first session was a great deal of fun and, as all good adventures should, left the investigators with more questions than answers.

Until next time, save the last bullet for yourself. 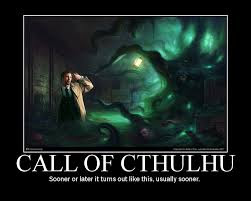 I haven't played a lot of CoC, but what I have played I've enjoyed.

I haven't either, Trey. I think this session is only the third time I've ever played. Great way to get out of a gaming rut!

I have to say that I've easily run more Cthulhu in the past couple years than I've run in the previous 20. My local gaming community is positively lousy with enthusiastic players.

At any rate, you're absolutely right about the necessity of securing player buy-in with Cthulhu. Same goes for any heavily genre-influenced game. (I look for the same level, albeit of a wholly different nature, of buy-in when I run Pendragon, for example.) I'd venture a guess that that may be the key to D&D's long-standing success: players can approach it from a myriad of directions and very little buy-in is actually required.

Whenever I run a horror game, I always like to circulate a quote from Ken Hite via GURPS Horror:

But when it does work—well, then, you have roleplaying at its finest pitch. Fear is the strongest, oldest emotion of all, buried deep in all our psyches from the caveman days, when we were one campfire away from the saber-tooth tigers. But as deep as it’s buried, you can bring it to the surface with some dim lighting, a hushed tone, and a good story. It’s a bottomless well of power, catharsis, and bloody farm implements, and it’s waiting for you.

So enter freely and of your own will, both GM and player, ready to scare and to be scared, to join hands around the metaphorical campfire, listen to the snarl of the saber-tooth tiger, and to share the oldest and strongest emotion…and to make it brand new again.

Horror roleplaying is different from other kinds of roleplaying. The players not only need to handle all the normal details of their characters’ development, but must work collaboratively to maintain the atmosphere that the GM is trying to build. Poorly timed jokes or out-of-character comments are rude in any game—but in a horror game, they can be downright fatal to everyone’s enjoyment.

In addition, many of the details of character creation, development, and play can differ when the goal of the game is not only to gain character points, but to enjoy the mood of the uncanny that the GM and other players will create. The player’s goal is to help build fear. The character’s goal is entirely different—it’s probably just to survive and thrive as best he can. Nobody needs to play the girl who suicidally wanders into the crypt alone at midnight in her nightgown…but that can be a lot more fun than playing the girl who stays safely locked in her apartment with her cat!

Right you are, David. Thanks very much for the feedback. That's some excellent advice for cooperative roleplaying.

It definitely was fun Sean. Remarkable how similar our "experiences" with CoC are. I too bought the game back in the 80s and loved it but never actually played it. Was great to finally do so.

I do regret that we, as a group, were too timid and weren't willing to go toe to toe with the "evil in the basement" until it was too late. Next time hopefully we can be a bit more pro-active... :)

Yeah, it's always a lot easier to thwart evil schemes before the cultists summon Nyarlathotep.

In this case, though, I really hadn't anticipated characters throwing dead bodies down into the cellar with a vengeful spirit. The scenario then became more dangerous than I'd originally planned.

haha, players do the damndest things. :)

Sean, we have remarkably similar histories with CoC. I believe I bought the game in the fall of '82, and it was on the suggestion from the owner of a comics shop I frequented back then. I haven't played a "straight" game of CoC in over ten years. Taking a page from your book, maybe I will try to remedy this soon. I look forward to hearing more about your group's eldritch adventures!

Thanks, Shane. This has become my new obsession, and most of my posts for the foreseeable future will be about CoC.