Still Crazy After All These Years

When I started my recent Call of Cthulhu campaign I had every intention, as a good old-school curmudgeon, of sticking with my second edition rule book.  That resolution didn't last very long.  My curiosity quickly got the better of me; I cracked under the strain and bought the current sixth edition rules. 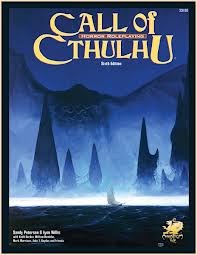 'New editions' have come to be a euphemism for 'completely unrelated game system bearing the same name' such as Wizards of the Coast regards them, or 'marketing tool to force people to buy the same game every four years' such as Games Workshop regards them.  It was refreshing and reassuring, therefore, to see that Call of Cthulhu has changed little over the past three decades and the sixth edition resembles the first edition so closely that the adventures for each are fully compatible.

The various editions of Call of Cthulhu have not changed the game so much as refined, elaborated upon, and expanded it.  It's the same game I've loved for decades, but with more spells, more weapons, and more creatures.  The skill list has been consolidated: zoology and botany have been replaced by biology, and where once there were two separate skills for reading and speaking a foreign language, you can now do both with a single skill rating.  Finally, there are now rules, skills, and equipment for running games in 1890's, 1920's, or modern settings.  So the sixth edition rules are the culmination of more than three decades of excellence in Lovecraftian role play.

It is also, unfortunately, a badly laid-out, disorganized mess.  The book's designer indulged in an orgy of excess.  The heading fonts are overly-elaborate and difficult to read, a condition which is exacerbated by embellishing them with drop-shadows.  The text is too small, and is often underlain by watermark images including, Nodens save me, latin text that makes reading the book a torturous ordeal.  Especially bad are the 'spot rules' side-bars which consist of white text printed in a miniscule font on a black background.  And then, just because the page isn't already busy enough, it is further embellished with faux burn marks along the margins and between the columns.  My poor aging eyes were bleeding after five minutes.  By the time I was done reading it I'd failed two consecutive SAN checks was gibbering madly.

The material is also very badly organized, making it very difficult to look things up even with the help of the index.  The insanity rules, for example are spread throughout the book instead of contained within a single chapter.  It would be ironic, but not surprising, if the insanity rules actually drove some Keeper insane.

I took sixth edition out for a spin at my last session and several times failed, after five minutes of fruitless searching, to find a given rule.  I then picked up my second edition rules and found what I needed in less than ten seconds.  Every time.

So, in a nutshell, Call of Cthulhu, sixth edition, is an excellent rule system flawed by incredibly poor design choices that make the book an absolute nightmare to read and use.  I'm glad to have the new rules, but hiring Abdul Alhazred to do the layout probably wasn't the wisest choice.  Hopefully, the forthcoming seventh edition will be designed to be read and used as a game book should be.
Posted by Sean Robson at 6:49 PM

Yep, Sixth Edition is an unholy mess of layout. My first CoC rulebook was Fifth Ed--very clean layout with most (all?) of the content of Sixth. There was an edition 5.5 with the same cover as Sixth but (I believe) cleaner layout.

The funny thing about Seventh Edition is that it promises to contain the most substantial changes to the system since Second. Lots of long-time fans are pretty nervous that it'll be too much change for change's sake. We'll see. As long as they do a better job on the layout, they'll be getting off to a good start. ;)

Hi David; I've read a bit about seventh edition, and it does indeed sound like the biggest change to the game, yet. There have been some flame wars and locked threads on the Yog Sothoth forums over 7th.

I should really try to get a copy of 5th edition on Ebay.

I bought the anniversary 5th edition, and have never looked at any of the older (or newer) editions, so can't make a direct comparison. I do find the book I have very difficult to understand though, from a rules perspective. The layout is mostly "underlay" free, but I've experienced the same problem you mentioned of finding the rules scattered through multiple sections.

In fact I've never played the game because I couldn't get an easy grasp on the rules.

I dunno, maybe I'm just getting lazy or stupid!

I'll bring my 5th ed book along next game night Sean. You can have a look at it and decide if it looks worth the effort tof tracking down a copy for yrself...

I agree with most of above - i have 1st, games workshop (most used edition)and 4th and 6th. 80s chaosium had great textbook simple layouts. Im not a fan of more skill points and d10 skill increases - not needed. Next ed scares me.

I dunno, maybe I'm just getting lazy or stupid!

Ha! Yes, I know just what you mean. My tolerance for learning new game systems is greatly diminished.

@Konsumterra: Jury is still out on the increased skill points and more rapid skill increases. I haven't played with these changes enough to form an opinion yet, though my first impression was that it might be a bit too much. The good thing is that no matter how skilled an investigator becomes, Cthulhu can always put him in his place!

I loved sixth edition when I first bought it, and thought it was a thing of beauty to behold. Then, like you, I started trying to read it and the sparkle faded fast. I have first, second, fifth and sixth editions, and as far as usability goes, I like fifth edition the best.

On a side note, I have most of the Trail of Cthulhu books (GUMSHOE System), and I would love to give that game a whirl sometime as well. Ken Hite did an amazing job putting together a game that in some ways surpasses CoC. If nothing else, as the ultimate reference guide for Lovecraftian gaming.

Hey Shane, I'd love to get your opinion on Trail of Cthulhu. I've been eye-balling it for some time, but I don't have a good enough handle on what the Gumshoe system is like to pull the trigger on buying it. I'm at odds with many of Ken Hite's and Robin Laws' game design philosophies, and I'm worried that ToC might be a very rail-roady game.

Truth be told, I would use Trail of Cthulhu as a source book before I would run it straight up. I have the same concerns as you, though I have nothing to back that up, because I haven't had a chance to try the game. Taken as a reference guide for Lovecraftian gaming, it is excellent and I would even say surpasses most of the CoC material in this respect. Hite is at his full power with ToC, which is saying a whole hell of a lot looking back at all the great material he has written for a shelf-load of games. He is the best writer in the business, in my humble opinion, and has a rare and unique mind that has a way of producing great game fodder.

My biggest concern with the GUMSHOE system is the idea that clues should never be missed by characters, and scenarios should never be disrupted by a missed clue, so an entirely new game was produced to facilitate that idea. It just seems unnecessary to me. If a clue is so important to the scenario in the first place there is zero chance I would ever allow something like a missed perception check foil the game. That just seems like basic Gamemastery 101 to me. Lay it out there for the players to "discover" and move on. Simple. No new system required.

I will be emailing you in a bit to discuss further...

I've run ToC twice and played it once. I agree with Shane: it's amazing brain food for running Lovecraftian horror, but I tend to think the Gumshoe system fixes a problem that's not really there.

Then again, I don't mind if a scenario completely goes off the rails--that's part of the fun of gaming a mystery rather than, say, reading a mystery novel.

* The weirdest feature of the Gumshoe/ToC system is that, since players are handed "core clues" and use "spends" to pick up other clues, there's no real way for players to know when they've gotten all the clues they potentially could from a scene. The book recommends the GM have an "End of Scene" card he can hold up when all the clues have been disseminated as a way to cue the players that it's time to move on!

* Secondly, Robin Laws seems to love to minimize dice rolling in his game designs as a general rule, which I find to be a capital crime against gaming. ToC only uses a single d6! That just ain't right.

but I tend to think the Gumshoe system fixes a problem that's not really there.

This is exactly how I would put it, too: the solution to a problem that never existed.

I'm really not a fan of the Laws/Hite style of gaming, but it does sound like ToC is an excellent Lovecraftian resource.

Thanks for your comments, David.