We kicked off our new Tunnels & Trolls campaign over the holidays and have gotten in a couple of sessions.

Character creation went quickly although a spate of bad luck left both my wife and daughter with abysmally sub-par attribute scores, so I let them keep rolling up characters until they got ones they could live with; thus was born Zelda the wizard, and Arya the voulge-wielding warrior.

For their first adventure, Arya and Zelda decided to explore the ruined Tower of Mazzarin, located just a couple of hours west of their home town of Caer Darrig. Mazzarin the Magician disappeared more than a century ago, and his crumbling tower has been shunned by local inhabitants ever since, but in recent weeks area farmers were reporting missing livestock and pets, and the legend of Mazzarin's ghost gained new traction in town. 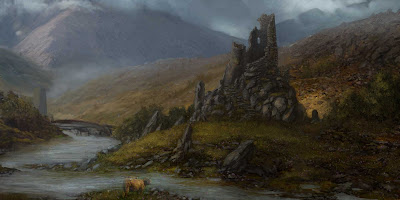 The tower was built into the side of a cliff in the foothills of the Mistmorne Mountains, and was visible from the road on the far side of a small lake.  The tower could be approached from a path along the base of the cliff on the west side of the lake, or by going through a bog on the east side of the lake.  The duo decided to take the latter route because, while the going was tougher, large cattails would conceal their approach from any observers in the tower.

The bog was not as safe as it appeared, however, and Zelda and Arya were ambushed by a hungry giant frog.  But instead of an easy meal of fresh meat, the predator met only the point of Arya's voulge and died quickly.

Making their way into the old tower, the pair discovered tracks in the dust of the rubble-strewn floor, along with dirty blankets and animal bones.  It appeared that something other than the spirit of a long-dead wizard was responsible for the animal disappearances.  They passed a stair case winding up the west wall to the crumbling remains of the second story, and headed for a set of double doors in the north wall of the tower.  Before reaching the doors, they heard someone say, "UH-OH!" from behind and above them.  Whirling around, they looked up and saw a startled goblin on the second floor ruins snatch up a small bow and begin to shoot arrows at them.  They dashed up the stairs and killed the goblin in short order.  It was obvious that the creature had been a sentry tasked to watch the approaches to the tower, and they saw a rope net strung above the entry of the tower.  If they had approached from the west instead of going through the bog they would surely have been caught.

The doors on the north side of the tower opened into a short hallway with another set of double doors at one end, and a door on the right wall.  Easing the door to the right very slowly open, Arya spied three goblins roasting rat-kabobs in the kitchen fire place.  The goblins immediately noticed the intruders and rushed into combat wielding rusty kitchen knives and kabob skewers.  It was a long and bloody conflict that nearly ended in the duo's untimely demise until Zelda decided to use the last of her spell points to cast vorpal blade on Arya's voulge, which tipped the odds in their favour, allowing them to finally beat the vicious creatures.

After a short rest to regain some of Zelda's spell points, the two decided to investigate the double doors at the end of the hallway.  These opened into what was obviously once a wizard's laboratory, filled with arcane appurtenances: collapsed bookshelves, piles of tattered, crumbling books, a verdigrised brazier, and on the far wall, a tapestry of the heavens.  Warming herself by the fire was a goblin spell-singer who had clearly claimed the wizard's lair as her own.  Alas, her spells failed her and she quickly fell to the two adventurers.  While looting the corpse, they pried a ring off the dead goblin's finger, which Zelda immediately determined to be magical.  A thorough search of the laboratory and its adjoining study revealed a doorway concealed behind the tapestry and, amid what papers had not already been used by the goblins for toilet paper, two arcane scrolls containing the spells Pygmalion, and Dear God.

The first session ended with both characters bloodied and exhausted but still alive, and they decided to rest and recuperate for a few hours before venturing on to explore door behind the tapestry.

This was our first experience with Tunnels & Trolls and we had a blast.  I really liked the cooperative nature of combat, in which all players combine their results to defeat the enemy.  In general, combat is very fast paced, except when the two sides are evenly matched, such as the fight against the three goblins.  Because large numbers of d6's are rolled by both sides in combat, the totals tend toward the median results, which means that when both sides are rolling the same number of dice, the winning side usually beats the losing side by only a few points, which can lead to some very long and drawn out battles.  The only way to break this stalemate is to try and tip the balance.  This can be accomplished by the use of spells, which is how Zelda and Arya finally beat the goblins, or to attempt some kind of stunt or feat using the saving roll mechanic.  Because this was our first session and everyone was trying to get a handle on the game, I veered away from suggesting that they try any fancy maneuvers because I was afraid it might get confusing, but as we get more comfortable with the rules I'll start encouraging them to use their imaginations to come up with some combat maneuvers.  This is also a great way for warriors to do more than just add a large number of dice to the combat result, and will make combat a lot more interesting and rewarding for them.

In the next post, Arya and Zelda delve further into the Tower of Mazzarin.

I really need to get my hands on some T&T. Sounds like a blast!

It's a game I wish I'd discovered decades ago.