Dancing in the Dark: Adaptations to a Lightless Environment 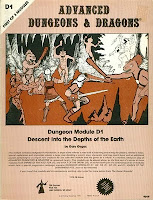 Since my current campaign is largely a dungeon delve, I've been giving a lot of thought lately to creatures that live in the darkness.

The very first adventure module I ever bought (but to this day, have never played) was D1: Descent into the Depths of the Earth, in which Gary Gygax introduced Drow to D&D.  Right from the start there was something about evil, subterranean, demon-worshiping elves that appealed to me.  But one thing about them has nagged me to this very day: why the heck do they have black skin?

Dark skin pigments are an adaptation to protect against ultraviolet radiation, which occurs naturally only in sunlight, and is in pretty short supply in the depths of the earth.  Explaining it as an adaptation to provide camouflage doesn't hold much water, either; camouflage isn't of much use in a light-less environment.

The Drachmari, evil subterranean elves of the Unseelie Court, in my campaign look more like Elric of Melnibone or the mutants from The Omega Man than drow - pale skin, white hair and light-sensitive eyes.  But old-schoolers are nothing, if not die-hard traditionalists, and I suspect that many would recoil in horror at the suggestion of non-black drow.  So, how to explain black skin in a light-less realm?  I suppose that one could say that the black skin is a manifestation of the drow's black hearts, or a sign of the favour of Lolth, or something like that.  But I find that kind of rationalization unsatisfying and prefer a more naturalistic explanation.  How about this: drow once dwelt on the surface, and evolved in a tropical, equatorial region of the world and subsequently adopted a subterranean lifestyle.  Assuming that they consume a diet high in vitamin D, such as fish, it is possible that they could retain their dark skin pigment indefinitely despite the lack of ultraviolet radiation.

One of the reasons I like this explanation better than "they're black because they're evil," is that it reveals some interesting clues about the ecology of the drow: they originated in the tropics (and perhaps enclaves of them still dwell on the surface of their land of origin), and that they subsist largely on blind cavefish caught in subterranean lakes.  I often find that knowing stuff like this fuels my imagination and helps with new adventure ideas.

Something else that I've been thinking about lately is the racial ability of "darkvision", or "deepvision" as it is called in Castles & Crusades.  For some reason that is absolutely unfathomable to me infravision, which has long been an ability of subterranean races, such as dwarves, was replaced with "darkvision" in 3E, and it is utter nonsense.  Darkvision is described as "black and white only, but it is otherwise like normal sight, and dwarves can function just fine with no light at all."  Apparently Jonathan Tweet was sick the day they taught science at his school.  Sight is the process by which photoreceptors (eyes) detect reflected light and transmit signals to the brain to decipher the appearance of illuminated objects.  Without light, sight is not possible.

Now the concept of infravision makes a certain amount of sense - there are many animals that can see in the infrared spectrum and the idea of underground monsters in D&D with infravision is not all that far-fetched. Infrared radiation is simply light with a longer wavelength than that of radiation in the visible spectrum.  Even so, while it might be useful for predators hunting prey in the dark, it would be of no use for navigating in the total darkness of the subterranean realm.  So, really, infravision while possible is not the best adaptation for life in the dark.

Echolocation, such as possessed by bats is a far better adaptation for life in the dark.   This type of active sonar involves the emission of high-frequency sounds, and ranging to objects is done by measuring the time delay between emitting the sound and any echoes reflected off of objects.  Multiple receivers allow the animal to perceive its environment with great accuracy, and bats can snatch insects out of the air in total darkness.  It seems to me that echolocation is a much better form of sensory perception for creatures that have evolved in a lightless environment.  It is of more practical use than infravision, and more plausible than the absurd notion of "darkvision."

Consequently, I am removing Darkvision and its ilk from my games, entirely.   As for dwarves, I'll be downgrading their eyesight to low-light vision, just like elves.  It never made much sense to me that dwarves would be able to see in the dark, anyway.  They are always depicted carrying torches and lanterns, and their halls are brightly lit.  They are clearly not a species that evolved in total darkness and therefore should not be entitled to such adaptations merely because they choose to live underground.
Posted by Sean Robson at 9:10 PM

I really dug the Drow when they were introduced for Greyhawk. Once they passed over to Forgotten Realms I started to hate the hell out of them. I know it was because of the Drizzt books, and how popular they became afterwards. Once the concept moved beyond the Gygaxian influence Drow became lame, and lacked the flavor of the original.

As to why they have black skin, the simple answer is, who the hell knows? The dwarves of Norse myth were referred to as 'dark elves', but their skin was pale and corpse-like. I believe I read that they were actually considered to be a form of undead (referred to as a form of white). I guess we would have to ask Gary why he decided black skin was the way to go. I wonder if he ever commented on the subject? Otherwise I guess the world will never know.

Yeah, popular media has the tendency to suck the life right out of things. I, too, hate the Salvatore books - probably the worst-written fight scenes in literary history; I find them even more tedious than battles from The Iliad.

It is also worth mentioning that the drow houses behind the Slave Lords of the 'A' series and the giants of the 'G' series modules were splinter factions who broke from Lolth and venerated a nameless Elder Elemental God. This makes them so much more appealing to me.

Cosmic Horrors are the gaming equivalent of msg: bad for your health, but add so much flavour...