The news is spreading quickly throughout the old-school community that Frank Frazetta has passed away today at the age of 82.

Frank Frazetta is my favourite fantasy artist of all time.  His paintings, often more stylized than realistic, are packed with dramatic tension and emotion that I find lacking in many works of fantasy art.  Frazetta's style was an enormous influence on me in high school, when I hoped to become an artist, and many of my early paintings in my teens were blatant attempts to emulate that style.

One of his pieces that I have always found incredibly powerful is the painting, Spiderman, which I painstakingly copied in acrylics at the age of 15 and was very proud to have captured some of the emotion that Frazetta conveyed. 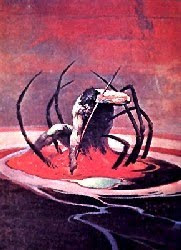 Another of Frazetta's paintings that was a great early influence on my artistic style was Death Dealer, made famous by the Molly Hatchet album cover: 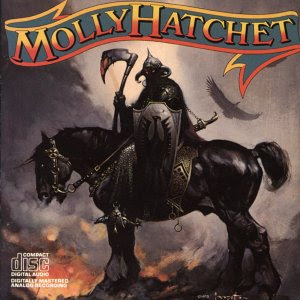 The first time I ever saw Death Dealer I was awed by the feeling of menace projected by the painting.  This is, perhaps, one of Frazetta's best known paintings and it has been reproduced in a variety of media, including this miniature by Ral Partha (please forgive the crudity of the paint job - I was fourteen at the time): 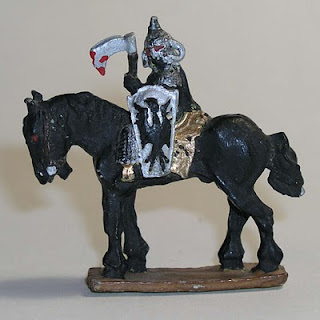 So powerful and characterful is the image of the Death Dealer that Image Comics created a Death Dealer series based on the character: 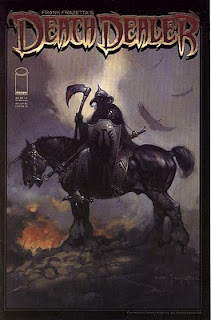 I've never seen paintings that can evoke such raw, visceral responses in me as Frazetta's always have, and I doubt I ever will.  Today marks the passing of what I believe was one of the greatest artists of the twentieth century and I doubt I'll ever see another book cover that moves me as powerfully as the Frazetta covered ERB novels that I've managed to collect over the years.

I hope that I can get through the rest of the week without having to write yet another memorial to someone whose work I admire greatly and was influential in my development.

Frazetta's impact is wide and sweeping. I will be watching Fire and Ice as well as Frazetta: Painting With Fire tonight in his honor. (Love the Death Dealer mini BTW)

Nice.
I had to root through many boxes in the basement this afternoon to find that mini - I haven't seen it in years. It's kind of embarrassing, but gratifying to know that I don't paint quite so badly anymore.