Hit Points and Healing - My Own Dim Perspective

I find myself appreciating the wisdom of many of D&D's rules a lot more now than I did when I was young.  Among the many concepts that I didn't quite 'get' in my youth was the rationale behind combat and hit points in D&D.  Sure, I'd read several of Gary Gygax's articles in The Dragon, such as "Realism vs. Game Logic" from issue #16, and "Much About Melee" from issue #24, so I knew that the game's combat system was deliberately designed to be abstract, but I never really understood how well it reflected both practical game mechanics and reality until much later.  Let's face it: at fourteen I didn't have the perspective of life experience with which to judge such things.

It was not until much later, when I began competing in traditional karate, that I truly understood the wisdom behind the melee combat and hit point mechanics in D&D and how well they balance pragmatic simulation with realism.  When facing an opponent of roughly equal skill there is much maneuvering, feinting and adjusting as you try to put your foe off balance both physically and psychologically, and long periods of time can elapse between true attacks.  Condensing all of the action in a one-minute combat round into a single die roll keeps the combat moving quickly, while providing a reasonably accurate simulation of the fight.  Compare this to a system, like GURPS (which I also enjoy), where the combat round is one second long and every swing, feint, parry, and dodge is accounted for.  This makes for a highly tactical combat system, but fights take a very long time to resolve.  This is great for some types of campaigns, but for high-octane sword and sorcery action I prefer D&D's abstract combat mechanics.

You will notice that I mentioned that the lengthy period of give and take in melee applies to combatants of roughly equal skill.  A superior fighter will quickly outclass his opponent, and this is reflected in the D&D rules by allowing fighters extra attacks against opponents with less that one full hit die.  This represents the relative difficulty such opponents will have in avoiding the attacks of a more skillful foe.

I really like the rationale behind hit points, too.  I didn't used to, though, and I remember chuckling at a cartoon, probably in Murphy's Rules, depicting a D&D fighter yawning in boredom as someone stabbed him repeatedly in the chest with a dagger.  It's comforting to know that I'm not the only one who didn't understand hit points.  Considering them to represent not the amount of physical damage one can withstand, but a measure of skill, endurance, and luck reflects real combat reasonably well.  The only times I've ever been injured in fight were when I was too exhausted to adequately protect myself.  There have been occasions when I was too tired to even lift my arms any more.  This is a condition that I call 'sword-dragging tired' after the final fight scene between Liam Neeson and Tim Roth in the movie, Rob Roy.  Neeson's character staggers across the arena floor dragging his sword behind him, too exhausted to lift it.  He's only suffered minor cuts up until this point, and isn't really hurt, but he is physically and mentally worn out and is down to his last few hit points.  He can't defend himself anymore and it is clear to all that the next blow will kill him.  This is a great cinematic example of how hit points in D&D work.

So my question, which I'm sure has been the subject of innumerable internet forum debates, is this: if hit points don't represent real damage, why does it take so long to recover them?  There  have been plenty of competitions that have left me 'sword-dragging tired' and down to my last few hit points, but after a good night's sleep, aside from a little minor stiffness, I felt perfectly refreshed.

I've been using a house rule for healing for some time now, that seems to work quite nicely and evokes the sword & sorcery genre - after all, how often do you see Conan lying bed-ridden for two weeks, recovering from his latest adventure?  I consider a character's starting  hit points at 1st level to represent his capacity to withstand physical damage - thus any damage dealt to a 1st level character is a wound, and these hit points heal at the normal rate.  Hit points gained at subsequent levels are a reflection of increased skill and endurance, and any hit point loss that does not reduce a character's hit point total below his 1st level starting value represents only fatigue, and these hit points are recovered relatively quickly.  In dangerous and uncomfortable settings, like camping out in the dungeon, a character recovers 1 hit point per hour of rest.  If resting in a safe comfortable environment, a character will recover 2 hit points per hour of rest.  If resting at an inn with cold ale, a comfortable bed, and a willing wench to warm it, the character will recover all non-wound hit points in the course of a night.  I reckon that no matter how badly off Conan, Fafhrd, or the Gray Mouser are, a night of drinking and wenching always puts them to rights.  This rule also helps encourage sword & sorcery genre conventions.

I am well aware of the irony of recently admitting my past ignorance of the rationale behind certain D&D rules while at the same time invoking a house rule to "fix" one of the tried and true rules of the game.  To quote Gary Gygax:

"I do admit to becoming a trifle irritated at times to read an article in some obscure fan magazine or a letter to the editor of some small publication which attacks the game - or claims to be sure to improve it if only their new and 'improved' rules are followed.  My irritation is, I hope, only impatience with those who only dimly perceive the actual concepts of the game, and not my wounded vanity."

I have no doubt that my problem with the rate of natural healing in D&D reflects my dim perception of the concepts of the game.  Most of  my other problems with the rules have been - why not this, too?  After thirty years I'm still not getting it, so until I have an epiphany and come to truly understand the rationale behind the game's natural healing rate, I'm going to stick with my house rule for the time being.  It works well for me, reinforces the sword & sorcery genre and, I think, sticks to D&D's spirit of realism and pragmatic abstraction. 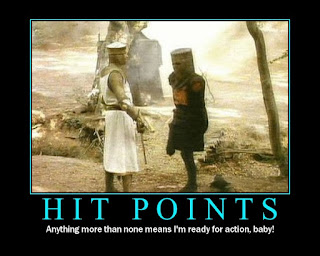 Your views mirror mine. I've always wanted to separate wounds from fatigue. The solution you propose is very workable!

I've been using it for some time now, and I'm quite happy with it. It also saves the cleric from having to take so many healing spells to use out of combat. Now he just needs to take enough to keep people alive in combat, freeing him up to take some more interesting spells as well. Out of combat people can rest up quickly and get back in the action without nearly as much convalescent time.

High level PCs are like tropical storms... it's best that they be few and far between, because every time you see them, they destroy the place.

Keeping healing times long creates intervals of normalcy between the depredations of powerful creatures, be they PCs or monsters.

While I agree with your point of view, as I must since your the DM, it makes me wonder. At the end of the battle in Rob Roy, when he is sword draggingly tired and can't even lift his sword to defend himself, what would his AC be?

It can't possibly be the same as it was at the beginning of the fight, he can't even defend himself anymore.
Now in the course of one battle, you opponents would be getting just as tired so it would balance itself out. What about enemies that don't get tired such as golems. Or what about new enemies that show up during the middle of a battle.

I've not clue as to how this could be incorporated except by lowering your AC as you lost HP. That, however, would result in many dead characters.

Armour Class, as it was originally intended, represented only the defensive value provided by armour (hence the term). In the original rules, extra defensive bonuses such as from shields were applied as penalties to hit the character and could, therefore, be easily ignored when appropriate. The concept of AC got muddied in later iterations of the game when all sorts of things, including dexterity bonus got added to armour class.

Properly speaking, a character's defenses are comprised of his armour (AC), which doesn't change as he becomes fatigued, and his active defenses such as dodging and parrying (represented by hit points) that are reduced as the character becomes fatigued.

With respect to monsters, like the golem you mention, hit points are a literal measure of how much physical damage a beast can withstand, unlike a character. Here's a quote from Gary Gygax explaining the difference:

As I have repeatedly pointed out, if a rhinoceros can take a maximum amount of damage equal to eight or nine eight-sided dice, a maximum of 64 or 72 hit points of damage to kill, it is positively absurd to assume that an 8th level fighter with average scores on his or her hit dice and an 18 constitution, thus having 76 hit points, can physically withstand more punishment than a rhino before being killed...Ten points of damage dealt to a rhino indicates a considerable wound, while the same amount of damage sustained by the 8th level fighter indicates a near-miss, a slight wound, and a bit of luck used up, a bit of fatigue piling up against his or her skill at avoiding the fatal cut or thrust.

So clearly, hit points mean something different to characters than they do to monsters.

Nykster's comments have driven home to me the superiority of the OD&D rules over AD&D and later iterations in keeping protection granted by armour completely separate from all other forms of defense, rather than muddying it up with bonuses that confuse the issue.

I think you've come up with a workable solution to a problem that's always vexed me as well. A dagger held to the throat needs to be a threat--even if you the hero will overcome.