It is with no small embarrassment that I must confess to having completely forgotten to write up a new weird wonder last week.  I've been distracted by an ongoing kitchen renovation from hell, and it wasn't until Saturday that I realized that Wednesday had come and gone already.

To make up for it, this week I bring you one of the coolest animals to swim the ancient seas - the fearsome eurypterid!

Eurypterids, commonly known as 'sea scorpions,' are chelicerates - the same arthropod subphylum to which arachnids and pycnogonids, as well as xiphosurids (horseshoe crabs) belong.

The earliest eurypterids are from the Late Ordovician period and the group died out during the Permo-Triassic mass extinction approximately 250 million years ago.

Eurypterids were aquatic predators that hunted in warm, shallow water.  The earliest eurypterids inhabited strictly marine environment, but later, probably during the Late Carboniferous period they made a transition to fresh water.  Some may have been able to crawl out of the water for short periods of time.

They had 6 legs, with the last pair commonly modified as large swimming paddles, and there are fossil trackways that are believed to have been made by Mixopterus (shown above-left), so they were able to walk as well as swim.

Eurypterids used their frontal appendages for grasping prey, but many species have stylet or blade-like telsons (tail segments) and it has been speculated that some species may have used them to inject venom into prey, like their terrestrial descendents, scorpions, though there is no direct evidence to support this.

Most eurypterids were relatively small in size, but some grew to a metre or more in length, and the largest species, Jaekelopterus rhenaniae, from Germany, is 2.5 metres long (over 8 feet), making it the largest arthropod ever to have lived.

Eurypterid fossils are extremely rare, and they are always an exciting and scientifically important discovery.  It was the rumor of fossil eurypterids that sent a group of us from the Manitoba museum to prospect a locality in central Manitoba in the fall of 2004.  An artist had been collecting slabs of flat dolomite from this location and brought one into the museum that was elaborately painted on one side and had a beautiful fossil eurypterid on the other.  I remember spending five days on the site without finding so much as a single fossil, until about an hour before we were about to head back to Winnipeg when some fossilized arthropod parts were found.  This was a providential find, since we had pretty much written the site off.  As it turned out, this site, which we now know was a tropical lagoon, is now one of the world's few Late Ordovician lagerstatten (soft-bodied fossil localities) and many of the fossils we have found have been of tremendous importance, and we've been working the site every field season since.  In fact I'm getting ready to return next month for my 7th consecutive field season.  We've now found so many eurypterid fossils from this site that they've become almost boring, which is what one calls an 'embarrassment of riches.' 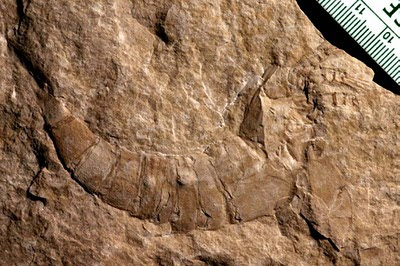 Above is one of the fossil eurypterids from Manitoba.  Note the abdominal segments and especially, the well-preserved appendage at the top right.  Below, is an incredibly well-preserved disarticulated appendage. 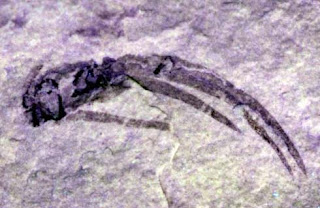 Reminds me of a face-hugger from Alien in a way... sorta. Nice write-up!

Interesting; as it happens I had the party in my B/X campaign run into one of these on the Isle of Dread a month ago or so. It didn't turn out too well for the thief.

Easily modified from the giant scorpion stats, of course. :-)

@Shane: Thanks! They remind me a lot of those things that Khan put in Chekhov's ear in Wrath of Khan.

@Jayson: Isle of Dread is fantastic fun. Of course, an island full of prehistoric creatures is right up my alley! And, yes, giant scorpion stats be just right.

That's one disturbing bug. I think I saw a scale model of the six footer at the Cleveland Museum of Natural History. Prehistoric animals, especially the really weird ones, are great inspiration for monsters. I've also seen a picture of a strange neckless salamander type thing with big teeth that was the size of a small crocodile; one showed up immediately in my GURPS Conan campaign...

Excellent! Thanks for the write up.