This week I'm going to continue my exploration of the alien weirdness of the phylum Echinodermata and put the spotlight on the class Crinoidea, better known as sea lilies. 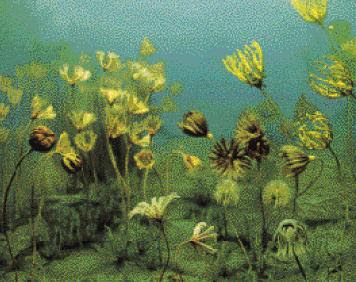 Although they resemble plants, crinoids are animals with calcareous exoskeletons that live attached to the sea floor by a root like hold-fast.  The feather-like pinnules on their arms beat to generate a feeding current that draws food particles into their mouths, which are situated atop a calcareous cup called a calyx.  The stalk, which extends from the seafloor to the calyx consists of calcareous discs, called ossicles that fit together like a tube of Certs.

While crinoids are extremely abundant as fossils, they are rarely preserved intact.  After death, the animal's exoskeleton quickly falls apart so that only bits and pieces are preserved.  The ossicles that make up the columnal are the parts that are most commonly preserved. 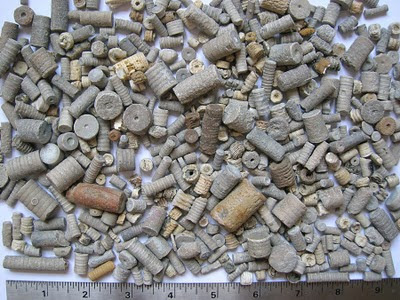 Indeed, crinoid ossicles are so tremendously abundant that entire limestone formations are composed entirely of them.  The Mississippian age (Late Carboniferous) Lodgepole Formation that crops out in the Little Rocky Mountains of Montana forms limestone cliffs up to 200 metres thick that are composed almost entirely of crinoid ossicles.  This sort of rock is so common it even has a name: crinoidal grainstone, and is shown below. 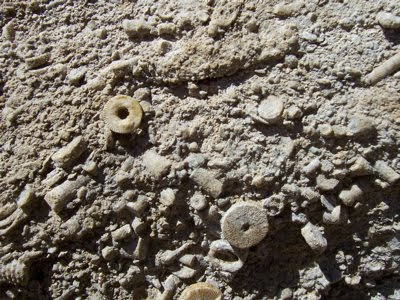 The vast abundance of crinoids that must have covered the sea floor in Earth's distant past, sufficient to build up hundreds of metres of thickness, is absolutely mind-blowing.  Sadly, though, for all the abundance of the ossicles, calices are rarely preserved intact - I've been hunting for one for more than fifteen years and still haven't found one yet.  When they are preserved, however, a fully articulated calyx is an absolutely exquisite fossil: 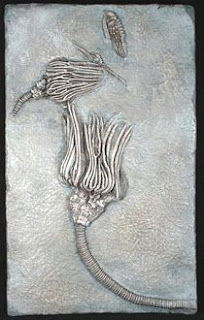 There is something decidedly unsettling about such a plant-like animal as the crinoid, with its graceful structure and delicate beauty.  It always evokes a sense of awe and even a shiver of dread; for some reason they make me think of the fossilized Elder Things discovered in the Precambrian strata of Antarctica by the doomed Miskatonic geological expedition in my favourite Lovecraft story, At the Mountains of Madness.

While most modern crinoids are free-swimming and lack a stem, a stalked crinoid was observed, in recent years, pulling itself along the seafloor.  The idea of stalked sea lilies moving lends an even deeper Lovecraftian shade and are makes them so bizarre as to be the stuff of nightmares.  Imagine if they possessed an alien intelligence.  Imagine if they had a purpose...

It's time to break out my campaign binder and start making up another monster, I think.
Posted by Sean Robson at 6:13 PM

Thanks for sharing, i'm interested to see the monster that is created ... carnivorous flowers!

I'll likely post all of my monsterized versions of the weird wonder series at some point.