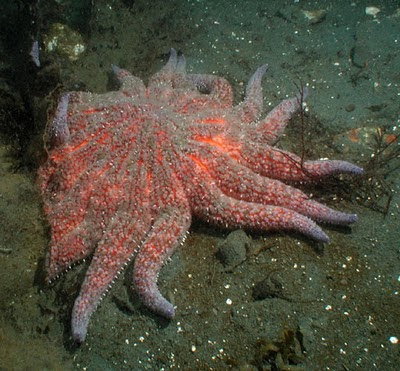 I recently received a request from my friend, James, to feature the Sunflower Star, Pycnopodia for one of my Weird Wonder write-ups.  This seemed like a good idea, since Pycnopodia helianthoides, shown above, is an old friend from my SCUBA diving days off the coast of Vancouver Island.

But, rather than focus exclusively on this single genus, I would like to discuss starfish in general.  For alien weirdness you cannot beat echinoderms, and the Asteroidea have an incredibly bizarre anatomy that is unknown to almost anyone who hasn't taken a university level course in invertebrate zoology.  And I'm all about alien weirdness.

Starfish have a very special place in my heart because it was they that made me fall head over heels in love with invertebrates.  As I've mentioned previously in my Lore Deposits post, In the Oceans of Insanity, it was partially my fascination with the works of Lovecraft that drew me to study invertebrate fossils, reinforced by my many hours exploring the oceanic realm as a diver.  But it was the experience of actually dissecting a starfish, while in university that my devotion to invertebrates was irrevocably affirmed.  While taking a general zoology course I had spent I don't know how many hours dissecting various vertebrate specimens including foetal pigs, dogfish, cats, rats, and frogs, to name a few.  The study of vertebrate comparative anatomy bored me to tears; all vertebrates are essentially the same - their anatomy differs only in tedious minutiae.  This, plus the nauseating smell of formaldehyde, which to this day makes my gorge rise, made me sincerely hope to never have to cut open another vertebrate.  Invertebrates, however possess a diverse variety of anatomical structures so vastly different from our own that they might well be from another planet - and none, more so than the starfish.  I still recall struggling with dissecting shears to cut through the tough, denticle-covered skin of my starfish and finally lifting the top to see what lay within.

Bilaterally symmetrical members of the animal kingdom are divided into two broad groups: protostomes and deuterostomes.  Most invertebrate phyla are protostomes, while deuterstome phyla consist of lophophorates, echinoderms, and chordates.  Thus, echinoderms are the phylum most closely related to our own.

Starfish are predators that often prey upon shelled animals, using their suckered tube feet to pry open shells and then extend its stomach into the gape to digest the victim within its own shell.  This video shows the process.  That's pretty cool, but the coolest thing about echinoderms is their water vascular system, and it was this that thrilled me in the course of my first starfish dissection.  The water vascular system serves as a hydrostatic skeleton allowing the starfish to move, control its arms, and coordinate its tube feet. 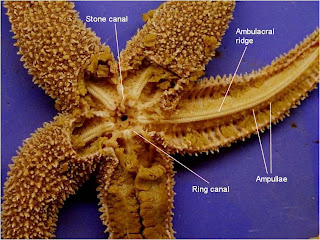 Water is drawn through a valve called a madreporite on the dorsal surface into a tube called a stone canal that leads to the ring canal.  Five radial canals extend from the ring canal into each of the starfish's arms, and the tube feet extend from the radial canal.  Regulating water pressure within the water vascular system allows a fairly complex, sophisticated, and fully coordinated system of movement.

The starfish crawls along the sea floor on its tube feet, which are all capable of moving independently.  While no one would ever call a starfish a speed-demon, Pycnopodia is able to crawl at a rate of over one metre per minute.

The tube feet are suckered and attach like suction cups, making it very difficult to pry the starfish off a rock once it is attached.  These suction cups also provide a tenacious grip on prey animals.  The following schematic drawing illustrates how the water vascular system works: 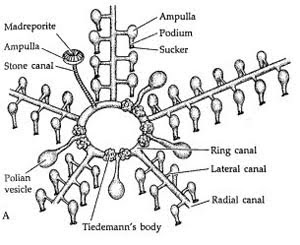 This is such an amazingly simple and elegant system that, even now, it amazes me.

I intend to discuss other echinoderm groups in future Weird Wonder posts, and trust me, they get even weirder.
Posted by Sean Robson at 1:18 PM