June has been a difficult month for me.  Lower back pain has prevented me from sitting for more than few minutes a time and has really cut into my gaming, painting, and blogging.  Fortunately, after a couple of weeks of physiotherapy, I'm starting to reclaim my life and hopefully I'll be posting a little more regularly.

While I haven't gotten much painting done, I did manage to finish off the intersellar horrors we know as the fungi from Yuggoth.

"They were pinkish things about five feet long; with crustaceous bodies bearing vast pairs of dorsal fins or membranous wings and several sets of articulated limbs, and with a sort of convoluted ellipsoid, covered with multitudes of very short antennae, where the head would ordinarily be."
-from The Whisperer in Darkness 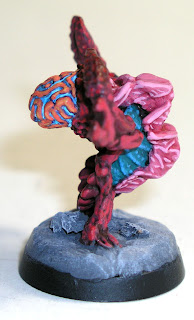 This is not a fantastic sculpt, and it doesn't reproduce Lovecraft's description with much fidelity.  This miniature is too humanoid in appearance and lacks the mi-go's crustacean-like multiple sets of jointed appendages, but it will do in a pinch.

The fungi from Yuggoth have established numerous colonies in the mountainous regions of the world, where they mine for rare ores.  They are more closely related to fungus than animal and they communicate with one another by changing the colours of their brain-like head.  They can communicate with humans by speaking in buzzing, insect-like voices.

Mi-go attack with both claws at once.  If the victim is hit the mi-go will attempt to grapple the victim and fly off with him, either dropping him from a great height or suffocating him in the upper atmosphere.

If slain, a mi-go's body will dissolve in just a few hours.
Posted by Sean Robson at 7:19 AM

Glad to hear you are starting to feel better, Sean. I have been so busy that I am just now looking over your posts on Mythos minis painting. Your talent really shines with these pieces.

Nice paint job. A lot of detail in there.

Thanks, Don, me too!