"...Shocking and uncouth black things with smooth, oily, whale-like surfaces, unpleasant horns that curved inward toward each other, bat wings whose beating made no sound, ugly prehensile paws, and barbed tails that lashed needlessly and disquietingly.  And worst of all, they never spoke or laughed, and never smiled because they had no faces at all to smile with, but only a suggestive blankness where a face ought to be.  All they ever did was clutch and fly and tickle; that was the way of the nightgaunts."
- H.P. Lovecraft - The Dream-Quest of Unknown Kadath 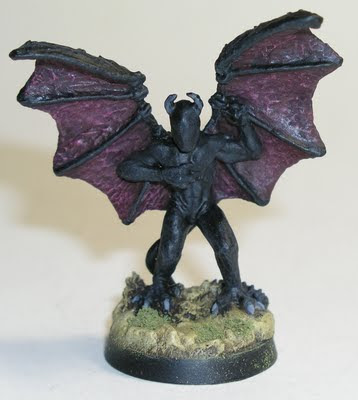 Here's the latest miniature in my quest to finally paint my boxed set of Call of Cthulhu mythos creatures.  The Dreamquest of Unknown Kadath was the very first Lovecraft story I ever read, and so nightgaunts (and ghouls) were the first mythos creatures I was ever introduced to, and for that reason they occupy a special place in my heart.  There is something chilling about a silent bat-winged and faceless creature that carries its victims off to untold terrors even if their signature 'tickle-attack' struck me as little silly back when I was young.

The nightgaunt was a tough one to paint; at least difficult to paint well while remaining true to Lovecraft's description.  Once upon a time I might have simply painted the whole thing black and called it done, but this does a grave disservice to such a nicely-sculpted miniature and would obscure much of the detail.  While I've stuck with black as the dominant colour, I also highlighted the body with dark grey to make the details stand out as well as suggesting light reflecting off the smooth, oily skin.  The deep red on the inside of the wings does not strictly accord with the description, but it provides a spot of much needed colour to punch up the model and emphasize the detail.  The wings were painted with Reaper Deep Red, then dry-brushed with Reaper Blood Red, then lightly dry-brushed with Reaper Entrail Pink.

Nightgaunts may be summoned by sorcerers who serve the Lord of the Great Abyss, and they are often employed to retrieve objects or kidnap subjects for the sorcerer.  They also sometimes dispose of the sorcerer's enemies by dropping them from great heights or stranding them in some forlorn and dismal locale.

This spell may normally only be learned by priests and cultists of the Lord of the Great Abyss.  It must be cast at night when moon is below the horizon, upon a flat stone surface inscribed with an Elder Sign.
Posted by Sean Robson at 10:48 AM

Cool nightgaunt, though that unavoidable minature "chunkiness" doesn't serve the sculpt too well.

This was always a problem with Grenadier, in my opinion, though I think the Call of Cthulhu line is much better than their AD&D sculpts.

There are some exceptions though, like the amazing Nyarlathotep miniature, which I am saving for 'desert.'

That is a nice looking miniature but a great paint job. That is a skill I wish I had as I love miniatures.

Thanks, Wymarc. If you love miniatures and love to paint, the skill will come.