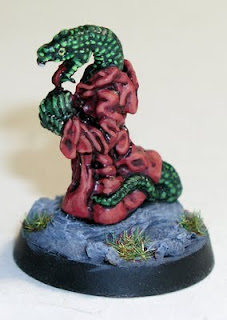 This was a pretty straightforward miniature to paint, complicated only by its small size (about 2 cm), which made the details difficult to paint, especially for my aging eyes that have become spoiled by the larger 28 mm scale miniatures that are popular today.

The robes were base-coated with Citadel Scab Red then washed with black.  A mid tone layer of Citadel Mechrite Red was applied to all but the recesses of the robes, which were then highlighted by a 1:1 mix of Mechrite Red:Citadel Vomit Brown.  The eyes, tongue, and fangs were painted in, and voila, a quick and easy paint job was complete.

The idea of an ancient civilization of snake people is a recurring theme in many fantasy role playing campaigns, as well as fantasy literature.  Serpent people figured prominently in Chris Pramas's popular Lovecraftian-influenced D&D 3.0 adventure, Death in Freeport, and the snake-like Pantathians are common antagonists in Raymond Feist's Midkemia novels. Serpent people just keep cropping up, and as worn out as they idea may have become, I never tire of them.

In D&D the serpent people are presented as the Yuan-ti, but while traditional serpent people rely upon sorcery and super science, the Yuan-ti have been upscaled and depicted as heavily muscled warriors.  I've got a real fondness for snake people of any ilk, and I have a number of Reaper 'Yuan-ti' miniatures, which I've painted in a variety of colours to represent species diversity: 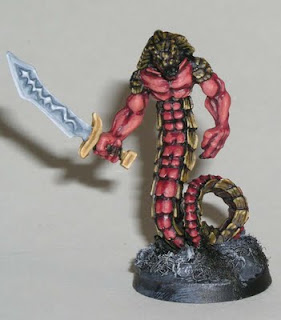 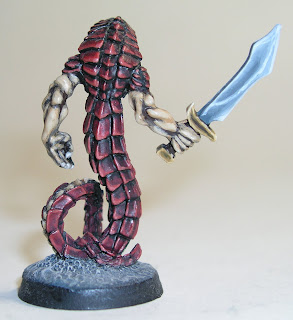 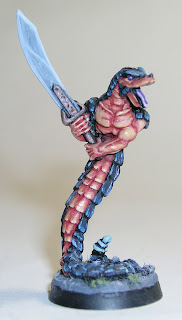 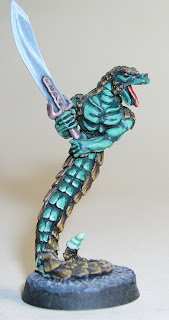 But, as cool as these guys are, I'll always prefer the robed bipedal snakes of the Cthulhu mythos that scheme in secret, summon demons, and whip out ray-guns to dispatch interlopers.
Posted by Sean Robson at 9:04 AM

Cool. Yeah, I've never liked the Yuan-Ti as much as the Serpent Folk either.

Damn that's some good painting. Think how much better it would be after laser eye surgery ...

@Paladin: (un)fortunately(?) my eyesight is not bad enough to warrant laser eye surgery. I'll just have to make do with the goofy-looking magnifying headset that I wear while painting.

May I suggest: the Qol, from Tekumel...

@phf: Nice! Those are some great looking snake people.

Nice models, from where they comes? There is a place where to buy them?

Hi Claudio, thanks very much.

The first snake man miniature is from Grenadier's Call of Cthulhu line sculpted by John Dennet back in the 1980's. You can probably find these for sale on Ebay.

The latter snake men in the post are more recent miniatures from Reaper, and they are still in production. You can find them at http://www.reapermini.com/Miniatures/snakemen