Along with the zombies that I featured in the last post, Citadel also produced a collection of skeletons for their Fantasy Tribes line.  These also bear the initials 'MP' on the base, leading me to believe that they, too, were sculpted by Michael Perry.

I've always had a great fondness for skeletons owing to my childhood love of Jason and the Argonauts, and its awesome skeleton fight scene.  Since Harryhausen movies were one of my early gaming influences, skeletons remain one of the great iconic D&D monsters for me, and I always envision them moving with the scary-quick stop-action motion depicted in the film.  I was delighted to see that the skeleton miniatures produced by Otherworld Miniatures look like they might have crawled right off the celluloid, owing to their great resemblance to the skeletons of Jason and Argonauts.  I haven't bought any of the Otherworld skeletons yet, but they are very tempting.

There are eighteen skeletons in the Fantasy Tribes Skeletons line; twice the number of zombies, but without the incredible number of variants.  Like the zombies, I believe I bought these sometime in 1982.

I have a couple of copies of FTS 04 - Skeleton Charging/Spear, and I love the pot helm that makes me wonder if he could be an outlaw biker with pool cue?

I decided to paint the shield blue on FTS 05 - Skeleton Attacking with Axe and Shield, because I felt that given the earthy colour I paint the bones that a brown wooden shield would have made the model too drab looking.  You can see that I use blue and red on most of these skeletons to provide a splash of colour and contrast.

I also have several copies of FTS 06 - Skeleton with Bow both painted the same and featuring characteristic Atlantean glyphs on the bow and quiver to give them some campaign context.

FTS 07 - Skeleton Swinging Club was painted several years ago and therefore doesn't fit in quite as well with the more recently painted skeletons.  He'll probably end up getting a repaint if only to touch up the smear of white paint I see on the club.  The camera always reveals what the eye misses.

FTS 09 - Skeleton Attacking/Dagger has the recurring bright blue and red clothes to contrast the drab dirty bones. I've tried to convey a very aged look to the skeletons in this collection.  They are not the recently dead, but the remains of Atlanteans that have lain preserved in tombs, possibly for millennia.


FTS 17 - Grim Reaper is obviously a figure who was of some significance in life and is adorned with bronze and gold and wears a turquoise cloak that is adorned with Atlantean sigils on the back.

The last figure in the Fantasy Tribes Skeletons line, FTS 18 - Legion of Hell Standard, is my favourite.  He has risen from his long slumber to call the legions of Atlantis once more to battle, much to the woe of man.

I've got a few other old vintage skeletons in the collection as well, such as this one produced by Denizen Miniatures FA 13 - Antihero:

And also the following four miniatures that I have no information on.  If anybody recognizes these and knows who manufactured them, please let me know - any information would be greatly appreciated. 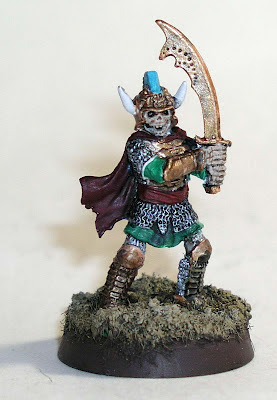 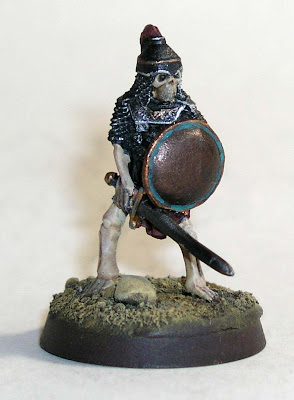 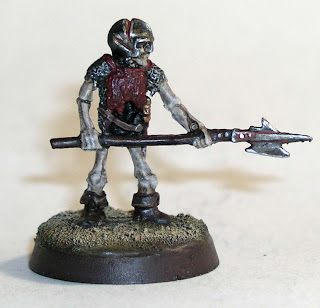 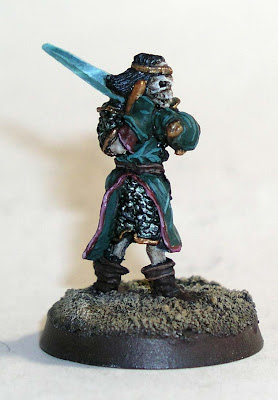 the third one from the end is classic sword & scorcery skeleton goodness. very nice work on all of them. :)

Thanks, guys. Dan, you'll be seeing these again real soon.

"I've always had a great fondness for skeletons owing to my childhood love of Jason and the Argonauts, and its awesome skeleton fight scene."

Truer words have never been said.

@Matt: Those were skeletons of the 'oh shit, run' variety. I love how fast and deadly they were and that just a few of them managed to wipe out all of Jason's men.

The one with a halberd is Ral Partha -- I got two in a boxed set (probably did not get one of the others that were supposed to be in it!)

The one with the big scimitar -- I think I've seen him before, want to say he's also Ral Partha but could be Grenadier ( a sculpt by Garrity or Guthrie maybe? they both worked for both companies...)

Hi Mike, thanks very much for the info. I did check the Ral Partha figures in The Armory's Buyers Guide to Fantasy Miniatures, but it only covers miniatures up to 1983, and these may be more recent than that.