Back in the Labyrinth

Hello, my friends.  It's been three years since my last post and I very much doubt anyone is still following this blog, but on the off chance that any of my old school gaming and blogging friends are still tuning in I want to explain my prolonged absence.

Not long after my last post I was unexpectedly diagnosed with cancer and the shock of it, and the subsequent depression, sucked away my motivation to do much of anything.  I stopped writing, stopped gaming, stopped blogging.  I stopped doing just about everything that gave me joy.  I didn't want to give these things up, but I just couldn't muster the enthusiasm or energy to carry on with them, or even to care about what I was giving up.

Now here I am, three years later, still alive and now out of that funk of depression I'd fallen into.  I'm still living with cancer, but I'm used to it now; humans are amazingly adaptable and we can adjust to nearly any change in circumstances and make it our new normal.  Also, my current prognosis is much more encouraging than when I was first diagnosed, and I expect to be around for many years to come.

The thing that has inspired me to resurrect this dusty old blog is the return of The Fantasy Trip.  As most of you have probably heard, a couple of years ago Steve Jackson reacquired the rights to his first role-playing game, long held by Howard Thompson, publisher of Metagaming.  Last summer, Steve Jackson Games launched a Kickstarter campaign to republish TFT in all its glory.  I jumped on board the moment I heard about it, and a few days ago my TFT Legacy Edition boxed set arrived in the mail, almost exactly 39 years after first being introduced to TFT at the age of fourteen. 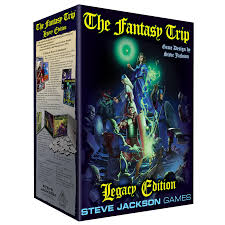 TFT holds a very special place in my heart.  Like many of us, I entered the gaming hobby with the Holmes edition D&D Basic set, and my previous gaming experience was limited to the usual suite of Parker Brothers board games like Monopoly and Payday.  The closest thing to an rpg I'd ever played was Clue.  As such, I found myself quite overwhelmed trying to figure D&D out, and my first session as a game master, running Keep on the Borderlands, was an unmitigated disaster.  I had no clue what I was doing, and my inadequacies were exacerbated by a serious case of stage fright.  Nonetheless I was hooked, as were most of my friends who played in that first session cluster-fuck, and they kept coming back for more instead of finding something better to do with their Saturday afternoons.  There is a magical allure to role-playing games that no amount of incompetence can quash.

I'd like to say that I quickly got the hang of things and became a great game master, but I didn't.  I continued to suck.  Hard.  And I couldn't shake that stage fright; the paralyzing fear of getting everything wrong just got worse with every mistake I made, and I made a lot of them.  Game sessions bogged down as I searched the rule book to figure out how things were supposed to work, I read aloud text from adventure modules that shouldn't have been read aloud, giving away surprises and ruining the fun, I was challenged on nearly every ruling, and felt the icy cold lump of fear settle into my stomach and make me want to slink down behind my GM screen and not come out.  On the bright side, my doctoral defense two decades later was a piece of cake by comparison; the committee members who attacked my thesis had nothing on a group of fourteen-year-old gamers.

The turning point in my game master experience came after I discovered TFT.  I started out buying Melee and Wizard, played some games with friends, and spent the better part of a summer playing arena matches by myself while my friends were away on family vacations.  I ran many a character through the solitaire adventure, Death Test, and by the time I finally picked up the role-playing rule book, In the Labyrinth, I had already mastered the game's combat and magic systems.  When I ran my first ITL adventure for my friends that old stage fright faded away.  There was very little to look up, and I didn't use any published adventures; the system was so elegantly simple I just ad-libbed the adventure as I went along.  And for the first time in my life I enjoyed being a game master.  I just let the players determine the course of the adventure and responded to their actions instead of forcing them down the railroad tracks of the prepared module; I made up quirky NPCs and spoke with funny voices; I had fun.  My group's favourite antagonist was Malcolm Brinebester, the local tax collector who had an uncanny knack for sensing when the characters were just back from an adventure with overladen swag sacks in need of redistribution to the crown.  I suspect my players devoted nearly as much time giving Malcolm the slip as they did fighting orcs.

Throughout my high school years I played many different games from a variety of genres: Traveller, Top Secret, Gamma World, Call of Cthulhu, Ysgarth, The Morrow Project, Champions, and on and on.  But TFT has always been special to me; it was the game that taught me how to be a game master.

And then disaster struck.  Shortly after high school I joined the navy and left home with naught but a duffle bag, and while I was away my mother cleared out my room and threw away most of my gaming stuff.  Including all my TFT books.  For decades I've desperately wanted to reacquire TFT, but I was never able to find used copies for a reasonable price.  So naturally, when the opportunity arose to support the campaign to relaunch the game I was all in, and I'm finally reunited with this wonderful game after far too many years.  I'm playing Melee and Wizard arena battles by myself again, and soon I'll be pitting myself against the challenge of the Death Test once again.  Will fifty-three-year-old Sean be any more successful than my fourteen-year-old-self?  Stay tuned.  I'm back in the labyrinth.

Welcome back to gaming! I'm looking forward to reading more posts from you, and I wish you the best in dealing with your health.

Glad to see you back! That's a heavy burden to carry. I wish you the best and look forward to reading more of your blog posts.

Thanks so much, guys! It's good to be back, and I can't believe anyone still has this blog on their roll after such a long hiatus. I'm looking forward to getting stuck back in and reconnecting with the community.

Hey Sean! Good to have you back.

Thanks, Trey, it's good to be back!

Very happy that you've found both a beloved game (TFT) and the impetus to start gaming again! Cancer sucks (duh), but it's even more rotten when it stops us from enjoying the things we love to do. Glad to see you stomping on the negativity.

Best wishes for continued improvement on all fronts!
: )

Thanks, JB! I'm looking forward to getting a TFT game going, if I can just find someone to play with.

As a Cancer survivor myself (Renal cancer, and a nasty one too, to paraphrase Ghost Busters -- six years (almost seven) cancer-free now!), I totally understand the emotional and motivational rollercoaster you've been on. Congratulations on your progress! I know you can beat this! And welcome back to gaming and blogging!

Thanks, Jeff, and congratulations on being cancer-free! I hope to be there someday too, but in the meantime I'm just going to take life as it comes and focus on the things I love. Like rolling dice and killing orcs.

Hi there, I only just found this cool site.... I am very much following along as my wife and I (plus kids, family and friends) LOVE this game.

Hi Stephen, Thanks for the comment; I'm glad you found your way here. If you are on Facebook and haven't joined already, there is a fantastic TFT page with a really friendly and active community.

Hey Sean...been a few years. Life certainly takes some unforeseen and sometimes unwelcome twists and turns. Glad to see you're back in the game.