The Spider Men of Leng 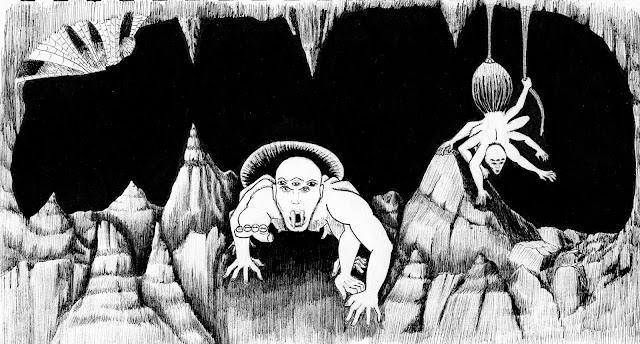 In caverns far below the surface of the land of Leng dwell the favoured disciples of Atlach-Nacha, upon whom the spider god has bestowed its blessing - or curse.  These once-human cultists, the Spider Men, are now twisted abominations cast out from human society and doomed to dwell in the shadows, spending their lives in service to their god.

Interlopers into the subterranean realm may find themselves taken unawares by the Spider Men, subdued and carried off into the darkness never to be heard from again.  The fate of such unfortunates is unknown, but whether they are used as food, or sacrifice, or as hosts for broodlings, most agree that they would be better off dead than in the multi-armed hands of the Spider Men.

Horrific parodies of humans, the Spider Men possess eight arms, each terminating in a five-fingered hand, with which they can scuttle across rough terrain without impediment, and climb faster than the most agile of primates.  With their five eyes they can see as well in the absolute darkness of the abyss as in the light of day.  They lurk in their webs spun on cavern ceilings, waiting to drop upon unsuspecting prey, which they prefer to take alive for purposes known only to themselves.

Average Spider Man: ST 12, DX 14, IQ 10, MA 12
Talents and special abilities: Climbing; Dark Vision; paralytic venom (as per Freeze spell);  Unarmed Combat II; webbing (as per Rope spell)
Tactics: Spider Men will try to engage foes in HTH combat whenever possible, often dropping upon them from above, which counts as entering from a rear hex.  Because they can employ many hands, Spider Men may punch twice per turn at no penalty, and they receive a +4 DX bonus when attempting to pin an opponent.  They will then bite pinned victims to paralyze them (the bite itself does no damage).

Spider Men rarely use weapons, preferring to attack bare-handed, but those who were priests of the spider cult will be wizards and will attack with spells appropriate to their IQ score.

Now that's fairly creepy! Love the tie-in to HPL and possible use with a TFT version of Astounding Swordsmen and Sorcerers of Hyperborea, though!

Thanks, Jeff. In my opinion the Cthulhu mythos is like chocolate; it makes EVERYTHING taste better.

You are SO preaching to the choir! I have two favorite RPGs, and would be very hard put to decide which I would choose if I could only have one. They are TFT and Call of Cthulhu! Been playing both for 35 years or more!

I love me some CoC too; when I'm not running a fantasy game then it's tommy-guns and elder signs.