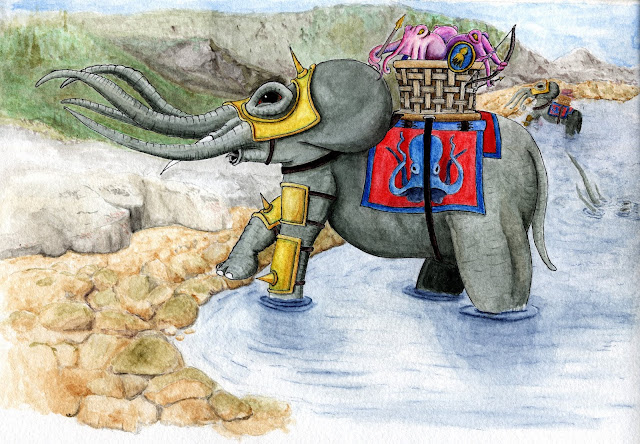 Within the dank grottos of their gene-sculpters, the octopuses have bred a fearsome new amphibious war mount for raids-in-force on the coastal villages of the surface world.

For generations, octopus raids have been small-scale incursions of a few dozen raiders scuttling from their tide pools to steal weapons and supplies.  But the creation of cephalophants - monstrous amphibious war beasts - have elevated the octopus threat from nuisance to a genuine menace capable of razing a small town in a matter of hours.

Unlike their masters, the thick leathery hide of the cephalophant protects it from desiccation, allowing it to remain on land for long periods of time, requiring only periodic submersion in a pond or stream to re-hydrate.

It is not unlikely that some cephalophants may be cut off or abandoned after battle, and left to roam wild.  Over time they may migrate along water ways and spread inland to form herds.  It is not known whether cephalophants are able to mate with normal elephants.

Cephalophant - ST 60, DX 13, IQ 8, MA 15, may attack with up to four trunkacles per turn striking single or multiple targets at range of 2 hexes, dealing 2 dice damage each; charge attack deals 4 dice damage to all targets in its front hexes; when trampling smaller foes (ITL pg. 126) the cephalophant has no chance of falling down; leathery hide stops 2 hits of damage.  Cephalophants are 9-hex creatures.

Optional Equipment - the battle regalia of the cephalophant includes bronze plates that have a 50% chance (roll 1-3 on 1 dice) of stopping an additional 5 hits from attacks against its frontal hexes, and incur a -1 DX penalty; if equipped with full barding. the normal rules apply (ITL pg. 132).  A howdah carrying up to three octopus riders may be equipped, incurring a -1 DX penalty. 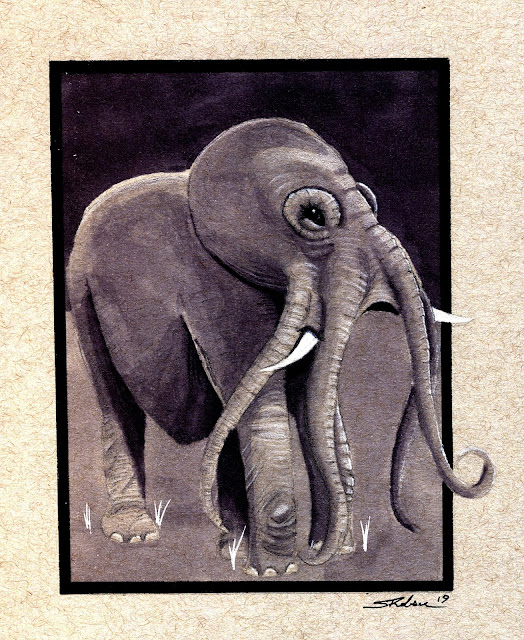 Lol; wait til you see my spider-men.