Yesterday I mentioned that I once played a gnomish wanderer with a penchant for natural history.  His field notes, which were a combination of session notes recorded as journal entries and a compilation my observations of creatures we had encountered, eventually became Cazban's Bestiary of the Realms. 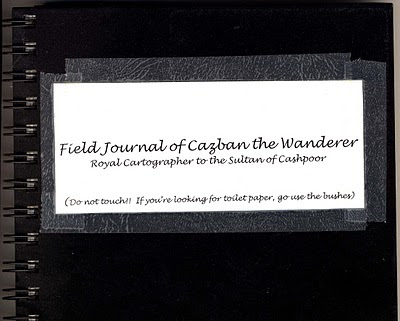 Cazban was a great deal of fun to play.  He was a hyperbolical storyteller who always managed to portray himself in the best possible light, and since he was also the party chronicler, history remembers him as a somewhat mightier hero than he actually was and by weird happenstance the other party members are remembered as his loyal followers. 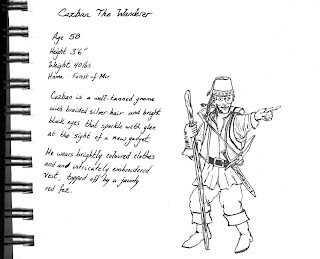 He was also a kill-stealing little git, who was completely ineffectual in combat until the party fighters had a tough creature down to its last few hit points at which time Cazban would hit with his crossbow and put it down.  Frustrating for the fighters; amusing for me.

Here's journal entry on a Displacer Beast that Cazban vultured with a lucky crossbow shot, including a self-portrait of the mighty hunter with his kill. 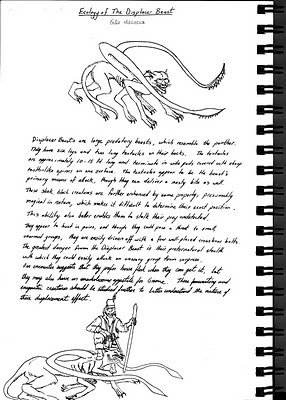 Followed by his in-depth research of the nature of Shambling Mounds:

And, finally, Cazban demonstrates his cool nerve and steady aim by slaying a troll and saving the entire party!

Cazban was really curious about the regenerative properties of trolls, so he chopped the body up into little bits to see how long it would take to grow back.  Afraid that the pieces might need to be kept warm, he incubated them in the magic user's bed-roll.  She wasn't amused... particularly when she awoke in the middle of the night with an angry troll in her sleeping bag.  Chaos ensued.  Fingers of blame were pointed.

It was all for a good cause though, in the end we had a remarkably thorough bestiary (including detailed data on troll regeneration).

This was a really fun and memorable character to play and a lot of his unique personality quirks developed as a result of keeping this journal.  It certainly helped me to get into character and stay there throughout the entire session.  I had to give him up when I moved to a new city, but the other players still fondly recall the escapades of Cazban and I am almost certain that the nice lady who played the magic user has nearly forgiven me.
Posted by Sean Robson at 6:01 PM

Every gnome should be required to wear a fez! Good stuff!

Awesome. They would be a great thing to have as a player's aid, maybe.

Love this book! Thanks for sharing! PS: I really like your pic of the shambling mound.