After nearly a week's work, I've finally finished my Ork painboy - an aggravatingly detailed miniature that took a lot longer to paint than I expected. 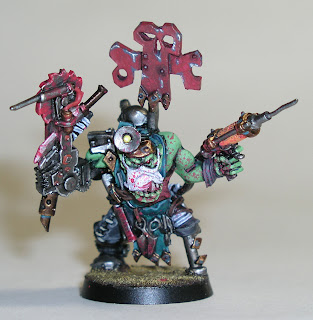 He's the medic in my Nobz unit who confers the Feel No Pain rule, allowing the nobz to avoid inflicted wounds on a roll of 4+, which will make an already fearsome and hard-to-kill unit even scarier.  Another of the painboy's features is his 'urty syringe, which allows him to make poisoned attacks.

The 'urty syringe was a challenge to paint because I wanted it to look transparent, showing the fluid within.  This caused all sorts of headaches, beginning with the colour.  I wanted something that looked like a virulent toxin, but the colour also had to complement the rest of the model.  I experimented with a number of colours, and ended up repainting the thing several times as each colour either clashed too strongly with the rest of the model, or didn't stand out strongly enough.  I finally settled on a dull orange which contrasts nicely with the model's teal apron and green skin, but is harmonious with  the red elements, and keeps the model from looking unbalanced.

With the colour settled on, I had to tackle the next challenge: making the liquid look like fluid in a glass syringe instead of just an orange cylinder.  I decided to try and paint bubbles, and I spent lots of time studying what bubbles look like by contemplating a mug of ale.  Never let it be said that I'm not willing to make sacrifices for my craft! 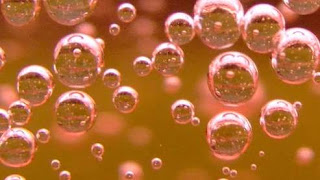 So here's the trick: how do you make lots and lots of tiny circles on a two-dimensional surface look spherical?
I started out painting the cylinder Reaper Fire Orange, then painted little black dots on it.  Over top of each black dot I painted a dot of Reaper Phoenix Red, a slightly darker orange than the cylinder, and left a little black surrounding each bubble as the meniscus.  Next, I tried to paint a small arc of GW Vomit brown within the Phoenix Red to represent the light reflecting off the sphere, and finally a white spot at the apex of the arc for the brightest point of reflected light. 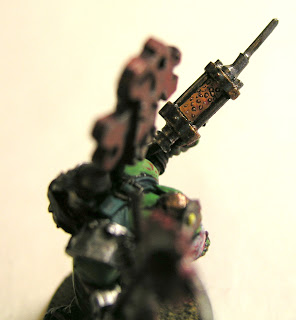 The technique didn't work out as well as I'd hoped, which isn't too surprising given how small the bubbles were.  Nonetheless, this was a first experimental attempt at trying to paint spheres, and I'm not too disappointed in the result, especially since I was pretty dubious about the whole process from the start.

I thought I'd share the technique, even though it failed to achieve what I attempted to depict.  Hopefully it might inspire someone to give it a go and succeed where I failed.  After looking at it for a while I think it would have been a good idea to paint some bubbles closer in shade to the Fire Orange and without the black meniscus, to give the illusion of depth.  But that will be an experiment for another time - I can't bear to repaint this syringe any more.

Next time I'll apply the lessons learned from this attempt and hopefully get a more realistic looking bubble effect.
Posted by Sean Robson at 3:45 PM

Wow. The stuff you guys paint is fantastic. Love seeing these. Thanks for posting.

Thanks, Whisk! My ego just got a big boost.

They are great. I used to paint ceramics, but that's nothing like the great detail you guys do on these. Love seeing them.