The summer of 1980 stands large in my memories as the last summer of my childhood, as I was to start high school in the fall.  I spent most of that summer hanging out with my friends, going to the roller rink, flying model rockets on the outskirts of town, and going to the movie theater to see Empire Strikes Back, and Airplane! roughly two or three times each week.

The summer of 1980 also brought us the second issue of Epic Illustrated.  My copy is missing its cover, which is truly unfortunate, because it features an awesome painting by Richard Corben.  However, thanks to that wonder of the modern age men call the internet, a quick Google search was all it took to acquire a copy for us to admire. 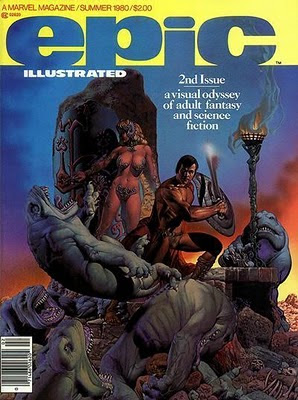 The feature story in this issue is Roy Thomas's adaptation of Robert Howard's posthumously published sword & planet story, Almuric.  Howard's protagonist, Esau Cairn, is a man of prodigious strength and violent temper who, much like Frank Miller's character, Marv, from the Sin City series, was born into the wrong age.  Cairn, who would have been better suited to the gladiatorial arenas of ancient Rome, has always chafed at living with the confining strictures of modern society.  The story begins as Cairn, who is fleeing from a police man-hunt, takes refuge in the observatory of Professor Avery Hildebrand. 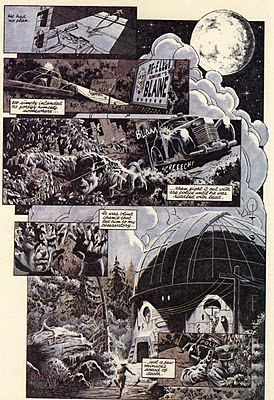 With the police already coming up the stairs, Hildebrand gives Cairn a choice: face his doom at the hands of the cops, or allow the professor to teleport him to a newly discovered planet, Almuric, in a star system far from our own.  Cairn hesitates only briefly before agreeing, and Hildebrand activates his teleporter, sending Essau across the far reaches of space to a new world just as the police burst through the door.

Up to this point the story has been illustrated in black-and-white, but as soon as Cairn arrives on Almuric it switches to full colour, which is a none-too-subtle comment on Esau Cairn's perspective.  His life on Earth was a bland and colourless existence.  His arrival on a unknown and primitive world signifies a new beginning and a chance to live on a world that is more 'real' to him than Earth had been. 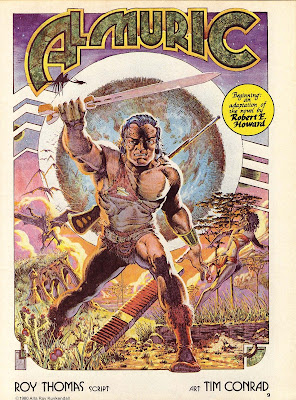 Almost immediately upon his arrival, Cairn is thrown into simultaneous conflict with both a band of troglodytic humanoids and a ferocious leopard-like cat.  This issue's installment ends with Cairn captured by the troglodytes.

I'm a fan of Roy Thomas's work on Savage Sword of Conan, and I enjoyed his adaptation of Almuric, but I dislike Tim Conrad's art so much that it ruined what might have otherwise been a fantastic adaptation of one of Howard's last stories.  Here lies the problem with graphic story telling media: if either the writer or the artist is off it can ruin an otherwise excellent story.  Todd McFarlane once claimed that comics are solely a graphic medium and that writing is irrelevant (probably to justify his ineptitude as a writer), which shows how shallow his understanding of the medium was at the time he said it.  For example, for a time during the mid-eighties, Roy Thomas had taken a sabbatical from Savage Sword and was replaced by a writer named Michael Fleisher.  Not only was Fleisher one of the worst writers I've ever been subjected to, it was obvious that he'd never read a Conan story in his life and didn't have the least understanding of Conan's character.  For more than a year, the dialogue in Savage Sword read like a really bad super hero comic and the stories were pure crap despite the fact that most of them were illustrated by the outstanding pencil/ink team of John Buscema and Ernie Chan.

Likewise, many of these early Epic stories are hit and miss due to bad pairings of writer and artist.  So we see well-written but poorly illustrated stories like Almuric on the one hand, and beautiful paintings to illustrate mediocre stories, like last issue's Silver Surfer story, on the other.

Perhaps for this reason, most of my favourite comics are those that were written and drawn by the same person, such as Frank Miller, Richard Corben, Bernie Wrightson, etc. who have a singularity of vision and can intuitively match their artwork to their narrative style.

Which, by no coincidence, brings me to this issue's installment of what I consider to be Epic's mainstay series, Metamorphosis Odyssey, written and illustrated by Jim Starlin.

In this issue Aknaton, the last surviving Osirosean, continues to gather allies in his fight against the Zygotean empire.  Last issue he collected Za, a sentient humanoid monster from a cannibalistic society, and together they rescued Juliet, a fifteen year old girl from Kansas whose family was killed by Zygotean invaders.  Now the three of them recruit a sprite-like woman named Whis'par from yet another world.  Aknaton leaves his three recruits to locate a protector for them on the planet Vega; a man who will be familiar to fans of Starlin's Epic Comics series, Dreadstar.

Interestingly, this chapter of Metamorphosis Odyssey also features a transition from black and white to full colour illustration.  Unlike the abrupt switch to colour that we see in Almuric, here we have a gradual transition over several panels as Aknaton talks to Whis'par, culminating in full colour when she agrees to join him and the trio of allies is complete. 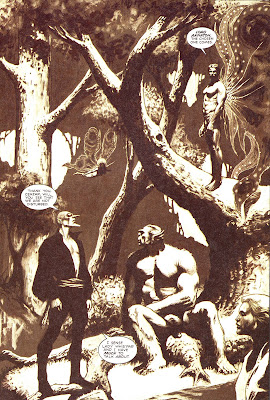 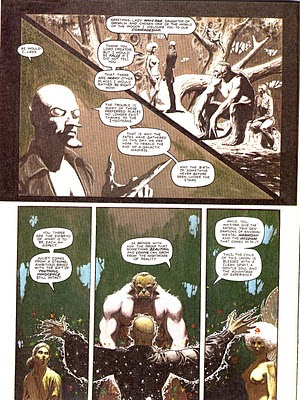 In addition to the stories, this issue contained an interesting interview with Glen A. Larson, creator and executive producer of Battlestar Galactica and Buck Rogers in the 25th Century.  Larson revealed that while Buck Rogers was pure escapist fantasy, he had intended Battlestar Galactica to explore social issues more deeply and wanted many of the scripts to be morality plays.  However, because ABC rushed the series into production to capitalize on the popularity of Star Wars, Larson didn't have time to create a backlog of scripts, and as a result ended up running the sorts of episodes he had wanted to avoid, turning the series into what he referred to as the "Cylon battle of the week."

I find this particularly interesting, because in light of this interview it would seem that the Sci Fi channel remake of Battlestar Galactica is a lot closer to Larson's original vision for the series than what we saw in the 1970's version.  While I certainly watched Battlestar regularly as a kid, it wasn't really 'must see' T.V. for me.  I am, however a great fan of the more recent Sci Fi series and I really prefer it as a human drama in space that can appeal to a broad audience - even those who aren't fans of science fiction.  I've read a lot of criticism of the Sci Fi series from fans of the original, so it it interesting to learn that the remake is more like what the original was supposed to be.
Posted by Sean Robson at 9:34 AM

That issue was full of goodness. I dig that Almuric adaption, and I'm also a big fan of Metamorphosis Odysessy (thought a bigger one of Dreadstar)--in fact, I may post on that series sometime soon.

There were a couple of other short stories in this issue that were very good. I'm remiss in not including Mike Grell in my list of favourite writer/artists. Although I missed out on the Warlord series, I loved Jon Sable, Freelance published by First Comics.